Saki Miyashita, who is in charge of Miki Takekasa, on the stage that appeared in the anime “ After School Dice Club ” that has been broadcast since October 2019. The conclusion is “ Cafe Meeple ” where you can play many board games.

After all, board games ???? It is a place that has appeared in the main part of the anime

I went down south from Demachi Ogata Shopping Street. 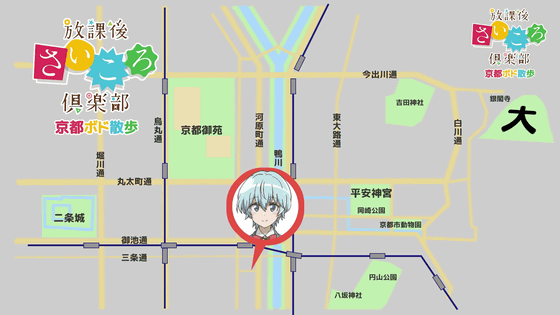 The destination is the board game cafe 'Cafe Meeple'. 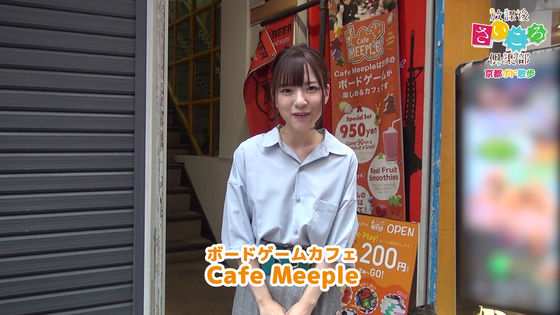 
At the entrance of the cafe on the 2nd floor, there was a sticker for the location project “My Neighboring National Treasure” by Kansai TV “

Yo-Don! ”. This sticker is not a sign that “the shop / person you interviewed will receive”, but a proof that you are particularly interested or impressed. 'Dobble' holds the card face down on the palm and turns it over at the same time as the game starts. More than 50 types of marks are set, and eight of them are drawn on one card. One of the marks is always the same as the other cards, so the goal is to find it quickly. There are five official rules: `` Towering Inferno '', `` Welling '', `` Poisoned Gift '', `` Azatsu Potato '', `` Let's Collect All '', but this time you will pass the card and win if you find a pair `` Atsuatsu Play with 'Potato' rules. This time, the fourth round was played and Mr. Miyashita, who did not lose, won the championship. In addition, although it is not recorded in the movie for the sake of time, 'Gokuburi Poker' is also played. There was also a great fight here. Miyashita who signed Miki who was watching the play. Finally, we took a commemorative photo together with colored paper drawn by the original author Hirohiro Nakamichi who visited Cafe Meeple. 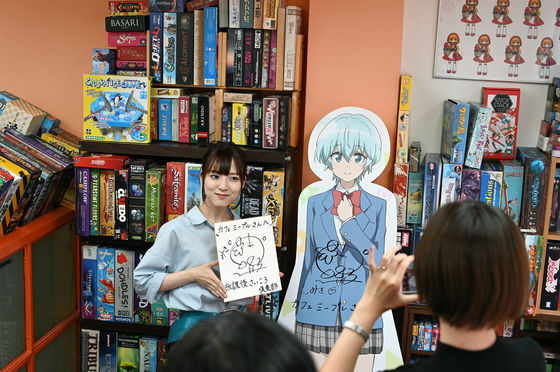 The “Kyoto Bodo Walk” will end, but the anime “After School Dice Club” will continue. Emilia, who had been showing up since Episode 6, appeared in earnest from Episode 8. We look forward to further developments, so stay tuned until the end.

In the 8th episode, Emilia , who played #M ・ A ・ O , appeared in full, and there was Emmy in the opening video too.
In commemoration of the appearance of such Emilia, a Twitter icon image is presented as a gift ????
Please use it.

On Twitter, Mr. Miyashita and others are playing, and the “Dobble” campaign that appeared in the eighth episode of the main story is being implemented.

We are waiting for many applications‼ ️ ???? ‍♀️ #Daisy Club pic.twitter.com/av3QHNe1uj