A popular distributor who challenged a bet to pay 500,000 yen if he could not get a different color Pokemon with `` Pocket Monster Sword Shield '' Mr. Wang, also known as a League of Legends and Hearthstone player, is also live on Pokemon Shield , and delivered a live endurance distribution to get the “color difference” of sheep Pokemon wool .

A different color is a Pokémon that has a different color than normal, although its basic abilities are almost the same as normal. For example, the wool shown in the following screen is usually covered with white hair, but the wool of different colors has black hair . However, the probability that different color Pokemon will appear is very low, and it is said that the previous

Pokemon Let's Go! Pikachu Eevee is about 0.024-0.36%. Mr. Wang estimated that it would take at least 10 hours to get a different color wool even by repeating the routine of “finding and finding wool → start a battle → escape if it is not the wrong color”.

The live broadcast platform Twitch has a function that allows distributors to give viewers one month of paid subscription rights, and there are many projects that use this function. Therefore, Mr. Wang planned a mission of 'Durable distribution until a different color wool can be found. If you can't get it, 200 subscribers (about 108,000 yen) will be given to channel subscribers'. You can watch the first day of the challenge from the following movie.


Wooloo lives a lot in the vicinity of Hallotown and Brassietown at the beginning of the game. Wang started hunting wool on the 1st road connecting Halo Town and Brassie Town. However, Mr. Wang was unable to find a different color wool and eventually gave up after 6 hours. At the end of the distribution, the screen for completing the purchase of the subscription right was displayed. Despite being unable to catch even after 6 hours, Mr. Wang was unable to give up, the next day `` If you can not get a different color wool, you will get a subscription right to channel subscribers '' Raise the amount of money 5 times and challenge again. You can see the delivery of the second day from the following.


At first, Mr. Wang continued to challenge while talking with a smile ... After 6 hours, you can't hide your fatigue, and the tone of the voice and the tempo of the talk are fluffy. Mr. Wang keeps challenging for more than 7 hours wrapped in a blanket However, it seems that he did not win over sleepiness, and Mr. Wang decided to take a nap. Since the delivery is as it is, the figure of Mr. Wang sleeping in bed was delivered to the world for about 30 minutes. Mr. Wang gave up again when the play time exceeded 15 hours on the first day. 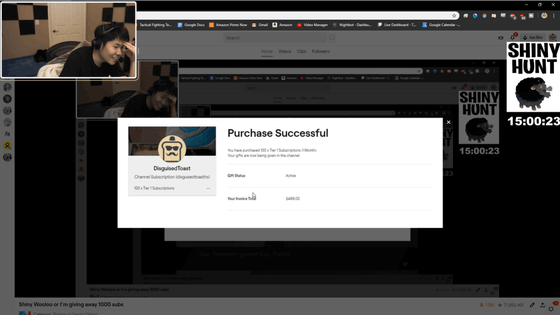