The globe released by Lalca Nicola is the 3D visualization of the epicenter of the earthquake that occurred from July 2017 to July 2018, and how much earthquake occurred on the earth wherever You can see in one shot.

Earthquakes between July 2017 and July 2018
https://glowy-earthquakes.glitch.me/

Earthquakes with exaggerated depth (and CSS filters of course ????) just had some fun for # 30DayMapChallenge .Check it out on Glitch: https://t.co/nqSa2NXN16 pic.twitter.com/exaCuVieXf The globe can be moved freely by dragging, and you can zoom in and out with the mouse wheel. For example, when zooming around Japan, an earthquake-prone country, it looks like the following. The epicenter is off the Pacific and is concentrated along the red line ... 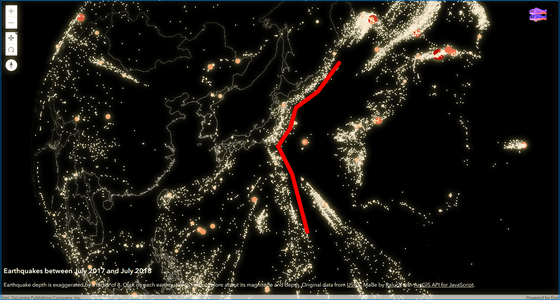 Compared with the following figure released by the

Japan Meteorological Agency, you can see that the line where the epicenter is concentrated is along the Japan Trench , the boundary between the Pacific Plate , North America Plate , and Philippine Sea Plate . In addition to the offshore Tohoku region, the Pacific Plate is also sinking into the North American Plate in the Nicolas, who develops a globe that can be operated from a web browser with the web API ' ArcGIS API for JavaScript ' for mapping application development, creates this epicenter map as part of the hackathon ' # 30DayMapChallenge ' that creates a map with the given theme I was told. Nikola's epicenter map is published using Glitch , a service that allows you to publish web apps for free.