Why does Firefox fight for the future of the web? As for the share of the browser, as of 2019, Google Chrome has become the first place with a big difference with 2nd place. Firefox, which has been ranked second, has experienced a rise and fall in the history so far, but in recent years it is said that it is fighting for `` the future of the web '' instead of `` market share '' . The battle faced by Firefox is spoken by Mitchell Baker , developer Mozilla president.

Firefox's fight for the future of the web | Technology | The Guardian
https://www.theguardian.com/technology/2019/nov/17/firefox-mozilla-fights-back-against-google-chrome-dominance-privacy-fears

Netscape Communications , the predecessor of Mozilla, was founded in 1994, became Mozilla in 1998, and released version 1 of the web browser ' Mozilla Firefox ' in 2004.

Mozilla is the second most popular browser after Google Chrome in 2019, but there has been a wave of popularity since it was developed until 2019. Netscape Navigator, developed by Netscape Communications, was the browser that swept the market around 1996, but in 1998 it was number one in Microsoft Internet Explorer. After that, the difference in share with Internet Explorer will be overwhelming, but Firefox, which appeared in 2004, will gradually expand its share, and will account for 30% of the market in 2010. However, before the popularity of Google Chrome, it was not able to shine once again.

You can check the graphs that show the rise and fall of the browser over the past 20 years in one shot from the following article. 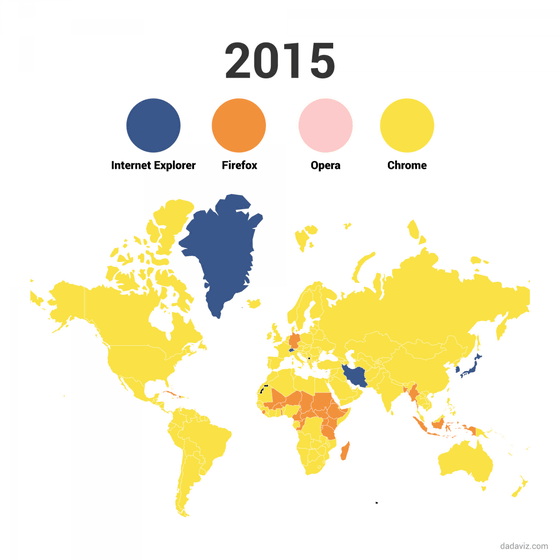 You can also check from the following movie. 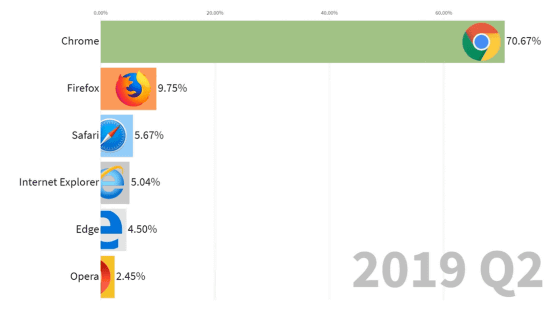 Firefox's current rival is Chrome, but as Chrome becomes monopolized, Mozilla's mission has changed not just to `` regain market share '' but to `` protect the future of the web '' It is said that there is. “At the beginning of the Internet era, it was thought that all businesses and social networks would care for us and act for us,” said lawyer and Mozilla chairman Mitchell Baker. “We are gradually finding that this is not the case, we need a guardian presence.”

Chrome is being developed by Alphabet, the parent company of Google. In recent years, the monopoly state by Google has been frequently seen as a problem, and `` Alphabet wants to control Google search and Chrome and want all of the web to be done via Google '', there are also voices that regard the current situation as dangerous It is.

This is because Google wants the Web to go through Google.It already mostly does (they have eyes on 70-80% of the web – the former stat from a Princeton study; the latter from my own web crawls).

It'S Not And Just The Web;. They Want Your World To Be Defined Ando Filtered By Them

For example, AMP promoted by Google hosts websites on Google servers and makes websites via Google, so all website URLs start with 'google.com'. Using AMP makes the page load slightly faster, so it tends to appear at the top of Google search results. For this reason, many companies are using AMP.

Facebook is just as enthusiastic about using user information for advertising as Google is, so Firefox uses the Facebook Container extension to isolate Facebook activity into container tabs, and Facebook is on the web outside of Facebook. Making it difficult to track users. In addition, Mozilla has released Firefox Monitor , a password manager Firefox Lockwise , an encrypted file sharing service Firefox Send , and other VPN services that warn you if your online account has a known data breach. Is now available on a trial basis .

“We all have the risk that a Dystopian future will come. The novel“ 1984 ”is the possibility of one future in front of us , ” Baker said. .

Another example of a company that values user privacy is Apple. Safari developed by Apple has an intelligent tracking prevention function . At first glance, Apple and Mozilla are developing browsers that have similar goals, but in a sense Apple is a “dangerous competitor” for Mozilla rather than Google. That's because users of desktop computers can always choose an option other than Google Chrome, and even though Google Chrome is pre-installed on Android smartphones, other browsers can be used.

On the other hand, it is possible to install Firefox on iOS, but iOS cannot set browsers other than Safari as default, and browsers that function on iOS must use Safari's rendering engine The above limitations also exist.

Apple's stance will be summarized in one sentence, 'You should believe us, we are different and better than others.' For this reason, what is offered through Apple is excellent, but anything that is a little different or that doesn't fit Apple will not work well. While Mozilla has invested heavily in rendering engine development to make the browser more powerful, Apple simply forbids Mozilla technology so that it can't do its job.

Eventually, the regulation of the Internet will be a major factor in how Mozilla is changing in the future, with various technology companies such as Google, Apple, and Facebook involved. Mr. Baker did not give details about the authorities' actions, but commented, 'It helps to provide products that are useful to people.'