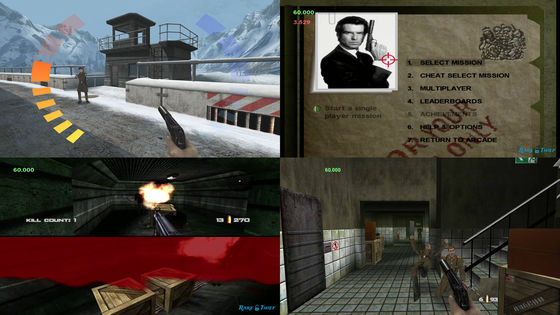 Golden Eye 007 ” released for NINTENDO64 in 1997. And from the remastered version of the images and movies that suddenly leaked in the beginning of November 2019, there was a chance that it was released around 2015, but it was suggested that it was canceled just before Ars Technica, a technical media, reports.

`` Golden Eye 007 '' is a first person shooting game (FPS) based on the movie `` 007 Golden Eye '', a mission mode that can follow the story of the original movie, and a battle mode where two to four people fight Can play `` Golden Eye 007 '' is one of the masterpieces that made children around the world known the FPS genre that was still rare at the time, and there are players who update the fastest clear record even after 20 years from the release, etc. It is a popular game.

“Golden Eye 007” was developed by a rare British game development company known for its “Super Donkey Kong” series, and subsequently hits such as “ Big Adventure of Banjo and Kazooie ” and “ Perfect Dark ” at NINTENDO64 Engaged in the development of However, since 2000, Nintendo sold its rare stock to Microsoft in 2002, as the development capabilities of the major staff declined rapidly since about 2000. Rare then participated in the development of the Xbox 360 title developed by Microsoft, and the sequels to “The Great Adventure of Banjo and Kazooie” and “Perfect Dark” were released as titles for Xbox 360.

“Golden Eye 007”, a game that was particularly popular among the games developed by Rare, received many requests from fans for remastering and transplantation. “ Golden Eye 007 ” by another development company was released on Wii in 2011, but the stage and system have also changed, and James Bond role has been changed from Pierce Brosnan to Daniel Craig It was a completely different game from NINTENDO64 version.

However, in 2016, the following movie playing `` Golden Eye 007 '' that faithfully remastered the NINTENDO 64 version was released on YouTube, `` Golden Eye 007 will appear for Xbox Live Arcade '' The rumor ran around the world.

Half Hour of GoldenEye 007 XBLA Gameplay-YouTube


In addition to the contents that faithfully reproduced the NINTENDO 64 version in the leaked movie, there were also scenes that seemed to be newly added stages and missions, but besides this movie it became a hot topic, but `` Golden Eye 007 '' remastered There was no definite evidence to show that the development of.

And in early November 2019, a lot of screen photos and movies related to the remastered version of “Golden Eye 007” once again leaked on the Internet. It seems that movies including those released in 2016 were deleted immediately, but are saved in the Internet archive .

If you look at the leaked scene photo, you can see that it is a faithful remaster of the NINTENDO 64 version. For example, the following image shows a scene where 006 merges in front of a gas tank in a chemical factory. NINTENDO64 version is like this ... In the remastered version, the expression and shape of the 006 are more realistic, and the texture and texture of the chemical factory floor and wall are dramatically improved. The KF7 (rifle gun in the center of the screen), which was sometimes called 'Epittsu', also has a realistic appearance, and it has come to understand the structure of the gun. The ceiling hole in the basement toilet was also dimly blurred in the NINTENDO 64 version ... In the remaster version, it is drawn clearly and brightly. If this is the case, you will notice at a glance even if a motion sensor bomb is set. Natalia and Bond fight against each other in the military library. The character's face and texture are clearly higher than the NITNENDO64 version, but the UI, such as ammunition display and font, has hardly changed. The leaked information also includes images of CG models used in the game. The following is a military truck remodeled for the remastered version. A model of a

golden gun that can bury the opponent with a single blow 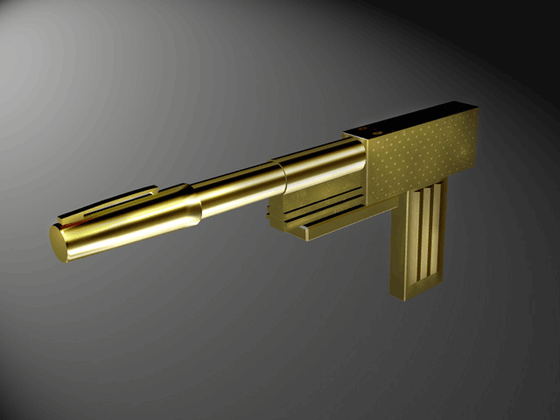 In addition to what was released in 2016, the leaked movie included a making video where the development staff talked about the episode. This is thought to be the scene of the interview video attached to the omnibus game ' Rare Replay ' released by Microsoft in 2015. “Rare Replay” contains almost all of the rarely developed games released from 1983 to 2008, but the “Super Donkey Kong” series and “Golden Eye 007”, which Nintendo owns copyright, are included. It wasn't. Since the development staff at the time in the movie says `` I thank you beyond the time of 17 years '', it is possible that the recording of `` Golden Eye 007 '' was probably for some reason just before the release Sex is considered.

In the following movie, you can see how the staff says, “Shawn Connery refused to use his face in the game,” and the game content that seems to be a remastered version.

The videos were quickly removed from his channel, but have been preserved through that archive link.

Some Interesting'S There Info In The First Two, Like The Fact That Sean Connery Was Allegedly The Bond Actor That Refused To Allow His Likeness To Be Featured In-Game. Pic.Twitter.Com/7SHzYNhk3H

As long as you see the screen photos and movies, it seems that the remastered version of `` Golden Eye 007 '' has reached the degree of completion that can be released, but Ars says that future releases are hopeless due to the complexity of rights issues Technica says. Phil Spencer, head of the Xbox division, tweeted in 2015: “We are trying to solve the rights issue of 'Golden Eye 007, but we are always giving up.'

@leflus Goldeneye rights are so challenging, looked at this many times.Lot 's of different parties to work with, we've always given up.

It is reported that the 007 series game rights include 'Movie series game rights' and 'James Bond game rights'. The former was acquired by Electronic Arts and the latter was acquired by Activsion . For this reason, the issue of rights that can only be solved by Nintendo and Microsoft is one of the factors that make the release of the remastered “Golden Eye 007” difficult. I don't know why the rights relationship surrounding 'Golden Eye 007' has become so complicated.

Ars Technica says that Nintendo and Microsoft have a good relationship in 2019, as many software for Xbox One was released on Nintendo Switch. However, the leak in November 2019 has no material to explain why the release of the remaster version did not work, and it is unlikely that the remaster version will be released in the future unless this issue is resolved Ars Technica argued.