An increase in “overly delicious food” is causing obesity In recent years, “hyper-palatable” foods, which combine fat, sugar, and salt, such as hamburger savory hamburger and cheese, are attracting attention as causing obesity. The

Hyper-palatable food that tastes too good behind obesity epidemic 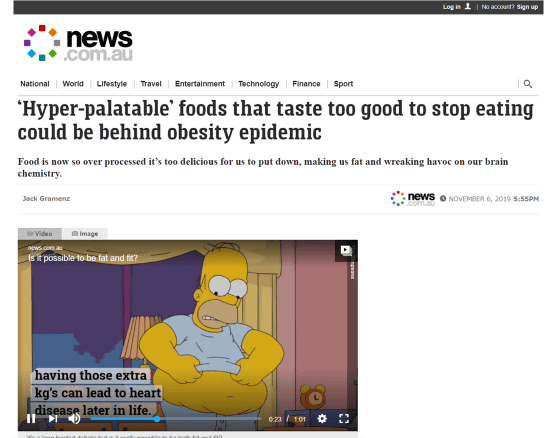 (PDF file) of the Economic Co-operation and Development (OECD) survey According to the, 38.2 percent of the American adult thing with obesity. There are various factors that can contribute to obesity, which has become a social problem. However, according to recent research, 'hyper-palatable' is translated into Japanese. Has been shown to be behind obesity. Hyper-palatable foods are thought to stimulate the brain reward system and overwhelm the satiety signal by combining sweetness, saltiness, and oil.

Tera Fazzino, an associate professor at the University of Kansas, pointed out that food companies are creating calculated “formulas” that make foods hyper-palatable and encourage consumption. However, the “official” definition produced by food companies has not penetrated the scientific community. “We generally use descriptive definitions of 'sweets', 'desserts' and 'fast food', but descriptive definitions are not specific to a mechanism that increases palatability. 'It's important to solve these limitations,' Fazzino tried to create a hyper-palatable food definition.

Fazzino et al.'S research team first described the 7757 foods listed in the Food and Nutrient Database for Dietary Studies (FNDDS) using software, such as “sweet”, “dessert”, and “fast food”. . The software provides a detailed data set that includes the amount of calories and fat, sodium, sugar, carbohydrates, and dietary fiber per food. After that, we checked whether each food was applicable to the three combinations of “fat and salty”, “fat and sweetness”, and “carbohydrate and salty” that strengthened hyper-palatable through synergistic effects. “Fat and saltiness” corresponds to bacon, for example, “Fat and sweetness” refers to ice cream and cookies, and “Carbohydrate and saltiness” refers to potato chips.

As a result of the survey, we first found that 62% of the foods listed in the database fall into one of the above three categories. Among the foods classified as hyper-palatable, the combination of “fat and salt” accounted for 70% of the total. And 5% of these hyper-palatable foods are labeled “low salt”, “fat free”, “low calorie”, indicating that there is not much meaning in the promotion statement of the package that says health. It has been.

Fazzino believes that the findings can provide the government with guidance to warn the public about the health risks that exist in over-processed foods. “If we can confirm that such food is a social problem through research, we can label it as“ This is a hyper-palatable food. ”Children in primary school are in a developmental stage and are hyper-palatable. “We are susceptible to food, and in such places, we could consider restricting certain types of food,” Fazzino said.

In the future, Mr. Fazzino plans to analyze how the proportion of hyper-palatable food differs between American diets and global diets.