What does the appearance of the high-end CPU 'AMD Ryzen 9 3950X', which boasts top-class performance for about 80,000 yen, mean? 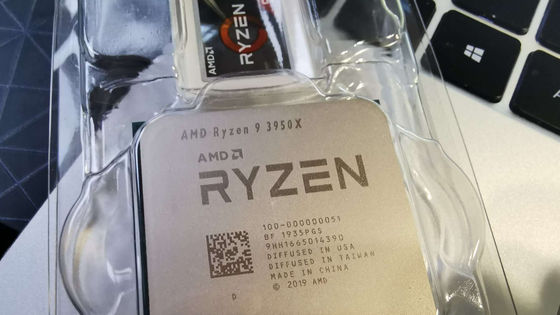 Regarding AMD's Ryzen 3rd generation CPU 'Ryzen 9 3950X ', which is about to be released on November 25, 2019 (Monday) , PC hardware information magazine AnandTech has announced the viewpoint of price, specifications, impact on the market, etc. We are discussing its position from. 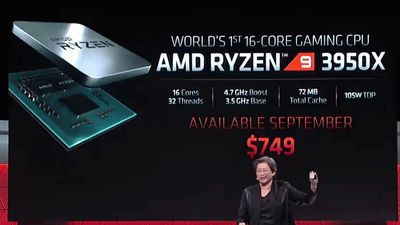 Regarding the performance of such 3950X, AnandTech said, 'Not only the best-in-class consumer CPUs supplied by Intel, but also the best-in-class high-end CPUs are within range, putting pressure on Intel's lineup like never before.' It is said that. AnandTech also evaluates the price as well as the performance of the 3950X. AMD's high-end 24-core CPU ' Ryzen Threadripper 3960X ' has a suggested retail price of 1399 dollars (about 150,000 yen), which is almost twice the price of 3950X, but 3950X is superior in game performance. AnandTech praised the cost performance of the 3950X by calling it a paradigm shift.

Actually, using the benchmark software of FPS `` Strange Brigade '' released in August 2018, when I tested it in the environment of 1080p resolution with the graphics API `` DirectX 12 '', the result was that 3950X was the top. increase. 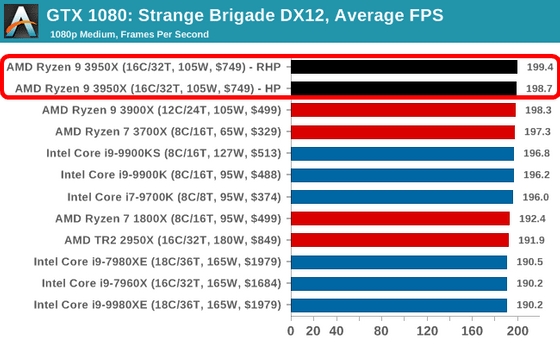 On the other hand, the 3950X has some aspects that are a little difficult to handle. Unlike the Ryzen Threadripper series, which requires a motherboard equipped with a dedicated socket called

Socket TR4 , the 3950X has the advantage that it can be used with Socket AM4 that supports a wide range of CPUs, but Socket AM4 supports 16 cores. Some things are not. Therefore, in order to maximize the performance of 3950X running on PCIe 4.0 , you have to purchase a Socket AM4 X570 motherboard , and if you use it on other motherboards, you will connect with PCIe 3.0 and the performance will be halved. It will be.

In addition, there are various products even if it is called an X570 motherboard, but if you do not use a motherboard that can supply sufficient power, the original number of clocks will not come out at the time of turbo. 'If you double the money you spend on the motherboard, it doesn't mean that the turbo performance will double, but the ability to use the 3950X depends on the choice of motherboard and the solid cooling,' said 3950X. He emphasized that a suitable environment is required to bring out the performance of.

In response to the question, 'Which of AMD or Intel should I buy after all?', AnandTech says, 'It depends on the cut.' For example, Intel's Core i9-9900KS (8 cores) has a PCIe lane close to 3950X, but the suggested retail price of Core i9-9900KS is 513 dollars (about 55,000 yen), which is considerably lower than 3950X. At the time of writing the article, the actual selling price of Core i9-9900KS is 71,800 yen , which is close to the suggested retail price of 3950X of 749 dollars (about 80,000 yen), but according to AnandTech, '12 core CPU Considering the popularity of the 3950X, it is expected that the demand will be high, and considering that the stock status is unknown, it should be noted that the price may be considerably high at the beginning of the release. ' Therefore, AnandTech used the overall score obtained by calculating the geometric mean from the results of load tests and benchmark tests, and compared the 3950X and other CPUs along with the price range. The results are shown in the graph below, with the vertical axis representing the overall score and the horizontal axis representing the price. If you look at the part surrounded by red, you can see that the 3950X located in the middle price range has the highest overall score. 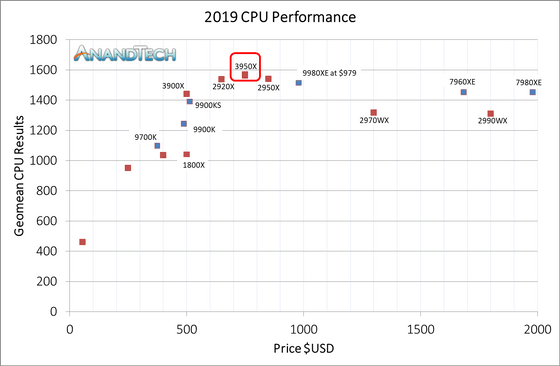 From these results, AnandTech concludes, 'For users who want the best results without using a high-end PC, the Ryzen 9 3950 X offers the highest overall score ever.'