It is reported that a kind of

antelope that was hunted by humans and possibly extinct was filmed in a forest area in Vietnam. According to the research team, the inhabitants were confirmed for the first time in about 30 years.

Silver-backed Chevrotain (scientific name: Tragulus versicolor) is a kind of sika deer that looks like a deer and has a silver hair on its back. By 1910, four types of specimens existed, and skin specimens were made in the early 1990s. However, since there is no remaining observations and research that is clearly in addition to the five samples, Silver-backed Chevrotain the International Union for Conservation of Nature of the Red List is to have been classified as 'DATA DEFICIENT (insufficient data)'. 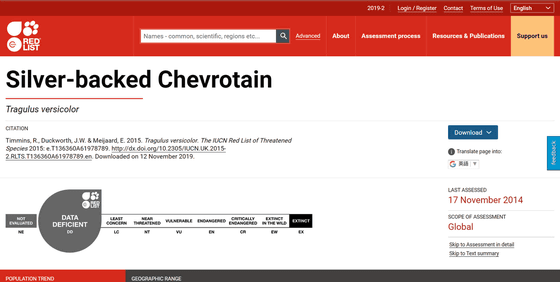 Andrew Tilker, a member of Global Wildlife Conservation, said, “This photo showing that Silver-backed Chevrotain lives in Vietnam is not a new discovery for locals, but for the wider scientific community, “Our research has achieved the rediscovery of the species.”