Herman Miller `` Enbody Chair '' broke down, so I asked for repair The arm part of the chair “

Enbody Chair ” that is used in the editorial department, which fits perfectly along the spine, can no longer be adjusted and fixed, so it swings loosely. Fortunately, because it was within the warranty period, I decided to ask Herman Miller for repairs.

Here is the “Enbody Chair” that has broken down. Since the arm part wobbled, I decided to request repair. At first glance it looks like there are no problems ... If the part that adjusts the width of the arm is loose or touches the arm, it will shake loosely. The arm wobble feels like the following movie. Originally it can be fixed in 3 stages, but there is no stopper. As you can see from the date when the movie was uploaded is `` 2014/07/07 '', the symptoms have been occurring for more than 5 years and have been used for a long time, but `` I do not leave it alone and do not repair it I decided not to postpone it any more and send it out for repair. '

Has the arm of Herman Miller “Enbody Chair” broken? -YouTube


Since the Enbody Chair was purchased from the Herman Miller official mail order , we request repair from HP.

Since the toll-free number and e-mail address are listed, I contacted by e-mail this time. 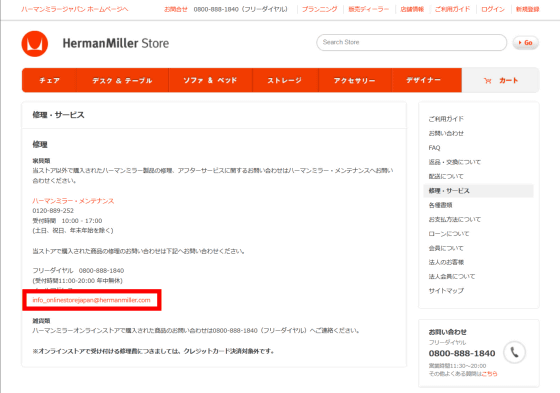 When I sent the e-mail, I received a reply in about an hour and was instructed to send an image of 'Overview', 'Bad point', and 'Serial number'. After purchasing the Enbody Chair, the phone number changed with the move, but because I forgot to change the registration information, the phone from Herman Miller was not connected, and he contacted me by e-mail. It seems that you will be contacted by phone. 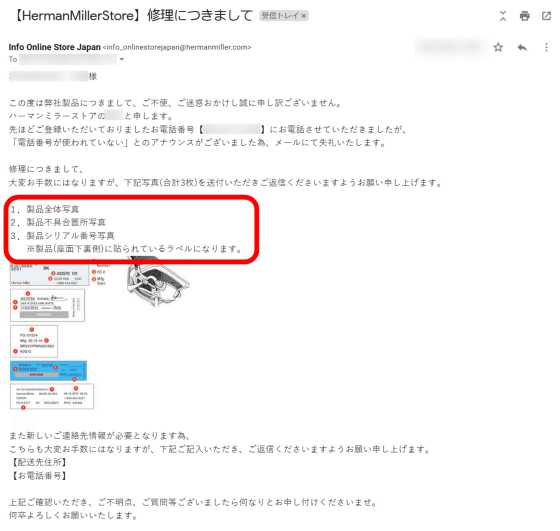 Prepare an image to report the defect. First, the whole picture. Shoot the arm that is the defect. Then take the serial number on the bottom of the chair. Email a total of 3 photos to Herman Miller. I received a reply about 4 days after sending the email. Reply with a date to get a chair return box. 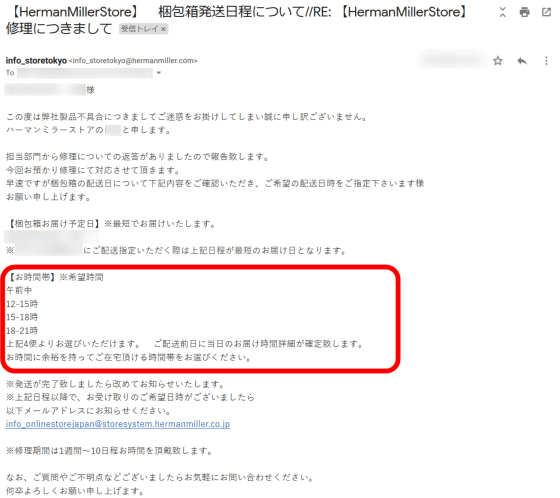 Here is the return cardboard that arrived on the specified date. I received the box body, bottom plate, reinforcing plate, and PP band for packing. A box needs to be assembled to pack the chair. It will be folded into a box shape along the creases and cuts made in advance on the bottom plate. Here is the bottom plate that is assembled with adhesive tape. Secure the corners with gummed tape. In addition, it is necessary to prepare gum tape by yourself, and cloth tape is recommended. Put the PP band under the bottom plate beforehand. The box body is closed with glue tape. Put a cardboard on the chair ... Complete by tightening the PP band. Since the weight of the chair in the box is 25kg, it is recommended to pack it in a place that is easy to carry out. I received a repair completion email about a week after shipping. We will inform you of the desired delivery date. 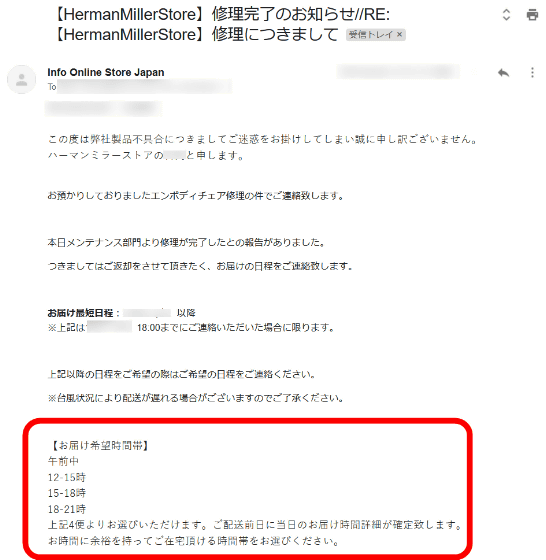 Here is the Enbody chair that came back after repairs. The corners were a little bit tight, but they were in the same cardboard as when they were packed. In addition to the body body, there was a report on repairs and work. The report stated that the arm malfunction was adjusted. The whole inspection and cleaning seemed to have been done, and there seemed to be no problem except for the arm. The appearance of the embody chair is almost the same, but ... The wobbled arm was designed to be firmly fixed.