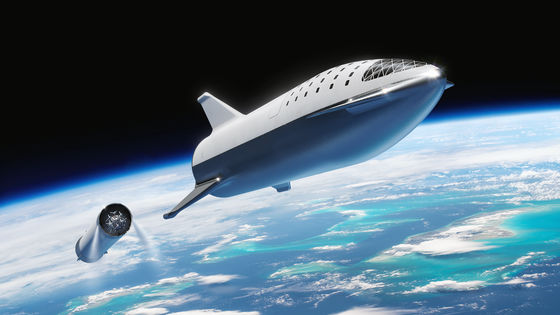 Starships and would take about 20 years. Mask CEO also revealed the cost of launching each Starship and the concept of the launch facility.

You can read more about the reusable spaceship 'Starship' developed by SpaceX by reading the following article.

What kind of rocket is SpaceX's new Starship that aims to carry more than 100 people to the moon and Mars? -GIGAZINE In the US Air Force event held in California in the United States, Mask CEO said, `` Starship has a fuel cost of $ 900,000 (about 98 million yen), and considering the operation cost, the launch cost is about $ 2 million ( It will be about 218 million yen) '. Considering that the Japanese disposable launch vehicle H-IIA costs about 10 billion yen per launch, the cost of Starship is considered to be much cheaper than that of conventional rockets.

According to Mask CEO, Starship can be launched up to three times a day. In other words, Starship can be launched about 1000 times a year, and more than 10 million tons of people and supplies can be sent to space in one year. However, mask CEO says that the construction of the city on Mars still takes 20 years because a planetary array suitable for launching a spacecraft from Earth to Mars is visited only once every two years. 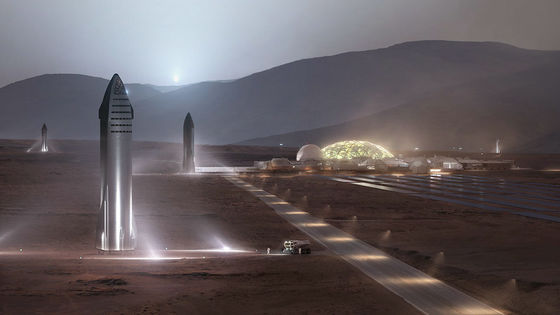 Regarding the production of Starship's rocket engine, “ Raptor ”, SpaceX is preparing a line that can produce about one unit per day by 2020. According to SpaceX, the raptors produced are strengthened to have a driving force of 300 tons per unit, and if this is realized, the launch cost per weight will be even lower than planned.

The launch of Starship involves not only costs but also noise issues. Starship is expected to be used not only for transportation to the moon and Mars, but also for ultra-high-speed transportation on the earth, and can travel from the United States to the United Arab Emirates in just 90 minutes. However, if it is launched three times a day, there are concerns about environmental damage caused by noise and vibration, so launching in the suburbs is not realistic. Musk CEO says he is considering building a commercial space port 20 miles offshore.

That said, most Starship spaceports will probably need to be ~ 20 miles / 30km offshore for acceptable noise levels, especially for frequent daily flights, as would occur for point to point flights on Earth

NASA has set a goal of landing on the moon by 2024 and manned exploration to Mars by 2033. In order to build a city on Mars, it is necessary to dispatch staff to the local area, so at the time of writing the article, an independent city will be built on Mars as early as 2050.