'Why the fuck was I breached?', A website that automatically generates excuses when a company is hacked and personal information is leaked. 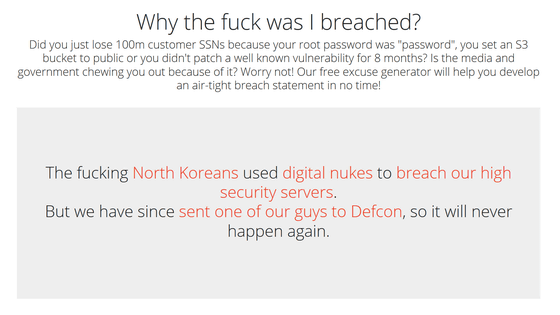 In recent years, there have been many cases where customer information was leaked due to hacking, and each company makes excuses each time. ' Why the fuck was I breached? ' Is a website that generates useless excuses for the case where the company is hacked.

Why the fuck was I breached?

When you access 'Why the fuck was I breached?', It looks like this. Shown in the gray wallpaper area is the generated excuse. This time, 'North Korea's digital nuclear weapons broke into a server with advanced security measures. We sent one of our employees to Defcon , a hacker's festival held in Las Vegas, USA, so such an accident There is no recurrence of. ' 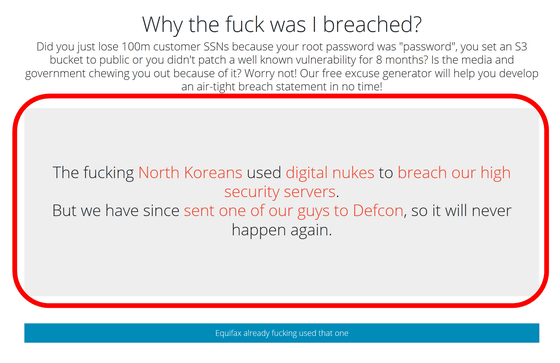 Click 'Equifax already fucking used that one' if you want to know another excuse. This wording is ironic

about the information leakage case of the American credit information company Equifax . Equifax's information breach has about 150 million victims, almost half of Americans, and the stolen information includes name, address, phone number, date of birth, credit card number, driver's license number, etc. The social security number and its damage were enormous. When the incident happened, Equifax was criticized for its sloppy security itself and low management awareness of security. 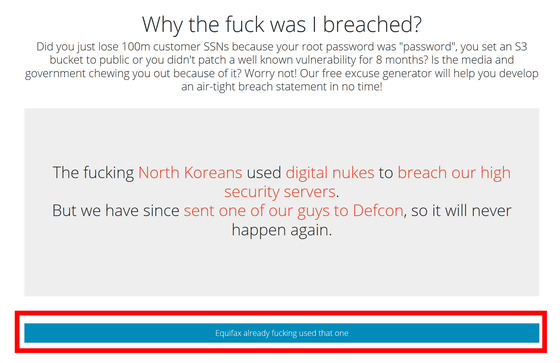 Click to see another excuse. This time, the apology and excuse was, 'A teenage genius hacker may have accessed customer data with a villainous technique. We hired an outside consultant so there is no recurrence of such an accident.' 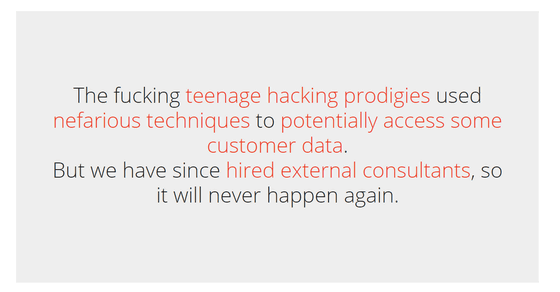 Another case where you get a somewhat decent excuse that 'a cyber terrorist has launched a DDoS attack that caused a minor failure. I've changed my firewall settings a bit so there's no recurrence of such an accident.' If there is ...

'The National Security Agency (NSA) has breached our server by exploiting a vulnerability in Windows XP SP1. We have reviewed the movie' Cybernet 'eight times, so there is no recurrence of such an accident.' There was also an excuse full of ramblings. 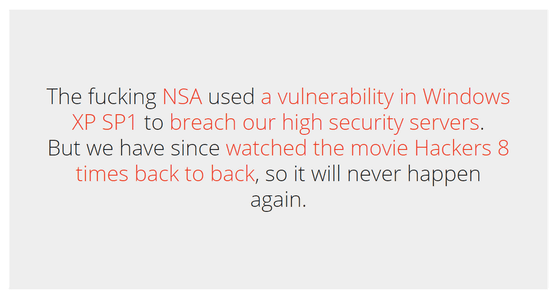 When the coffee maker was hacked, 'Europeans used

ransomware to hack the coffee maker. I copied and pasted the security policy I found on Google, so there is no recurrence of such an accident.' It can also generate the perfect excuse. 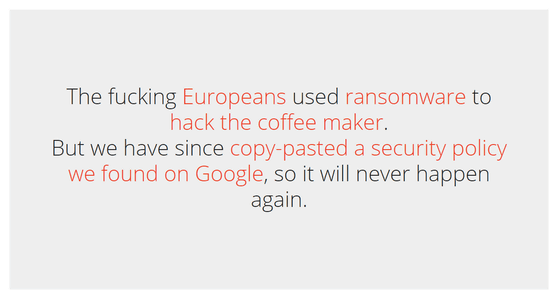 At the bottom of the 'Why the fuck was I breached?' Page, there is a link to the homepage of the IT security consultant company ' Reflare '. I feel the message from Reflare.