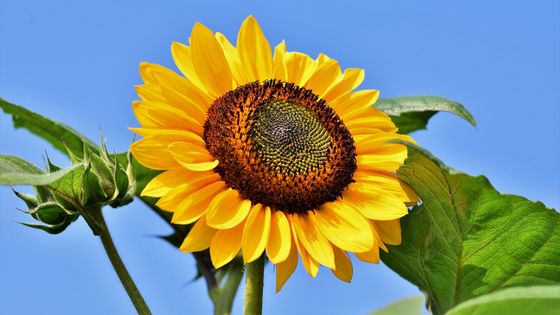 Sunflower stalk is bent in the direction of the sunlight phototropism has the property that, you can use the limited sunlight to the maximum. Research teams at the University of California and Arizona State University have developed a synthetic material called “ sunflower-like biomimetic omnidirectional tracker (SunBOT) ” that uses nanotechnology and has the property that the stem refractions and follows light like a sunflower . . 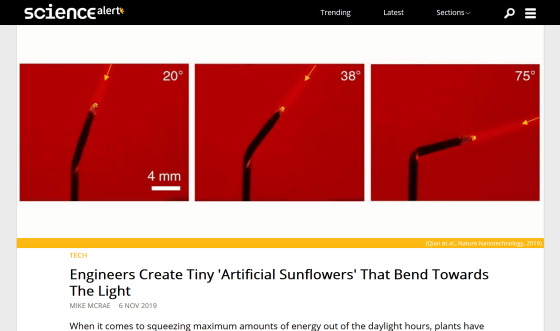 At first glance, the plant does not seem to move, but it actually moves according to changes in the environment, such as blooming around the rising sun, closing the flower around sunset, bending the stem toward the sun, etc. It is. Sunflower is not only able to accelerate the growth rate by being exposed to a lot of light due to the sun, but it is also easy to collect bees that are useful for pollination by being warmed by the heat of sunlight. Scientists have previously developed synthetic materials that twist and bend in response to light intensity and temperature. However, there seems to be no synthetic material that can detect and track the direction of the stimulus accurately.

Therefore, the research team paid attention to various materials that react to light or heat, such as hydrogels containing gold nanoparticles, photosensitive polymers , and liquid crystal elastomers containing light-absorbing dyes. These materials were formed into a thread of several millimeters in width and several centimeters in length.

The synthetic material that looks like a stem, named by the research team SunBOT, has the property of sensing the heat of the light when it hits the laser beam, shrinking one side and expanding the other side. Due to this property, SunBOT is twisted or tilted toward the light.

In an experiment where a laser beam was applied to SunBOT that was actually made of various materials, it was possible to receive light energy up to 400% more efficiently than a material that does not respond to light. It seems. If you look at the image below, you can see that SunBOT is responding over a wide range of angles from 20 to 75 degrees. The research team said the discovery could be applied to photovoltaic panels, smart windows, solar sails for spacecraft, radars, etc.