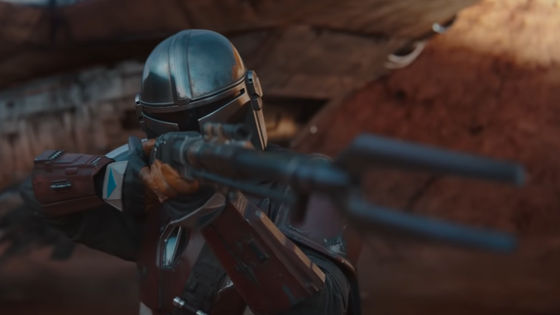 In the world of the Star Wars series episode 6 `` Return of the Jedi '' the Emperor of the Galactic Empire was defeated and set in the world five years later, still living as a bounty hunter in a chaotic galaxy The second trailer video of the first live-action drama “ The Mandalorian ” as the Star Wars is now available.


A Mandalorian gunman walking in front of a stormtrooper helmet covered in sand (act: Pedro Pascal ).

Gunman is attacked along the valley.

A gunman who deals with calmness and suppresses the opponent without any numerical disadvantages.

Its strength is so called 'the best of the stars around here'. Lightly dodge the stormtrooper's gun that ambush in the shadow of the door and feed it back.

The revolution should have made the world more peaceful than it used to be, but it does not seem to be a time to relax.

The romance between Gunman and a woman (act:

Mandalorian responds to the voice of “Mandalorian: Everyone is waiting for you”. The drama 'The Mandalorian' will be distributed exclusively from Disney's streaming service ' Disney + ' from Tuesday, November 12, 2019.