The ' Small World ' contest sponsored by Nikon, which takes pictures of the micro world with an optical microscope and competes for the visuals of photographs, celebrated its 45th anniversary in 2019. The results of the 2019 photography section of Small World have been announced, and the winning works that capture the fantastic and beautiful micro world have been released.

◆ 1st place: Fluorescent turtle embryo
The winner in 2019 was the 'fluorescent turtle embryo' photographed by Teresa Zgoda and Teresa Kugler , who study embryology at the Woods Hole Marine Biological Laboratory , using an experimental microscope. The turtle embryo used for photography has a thickness of 1 inch (about 2.5 cm) or more, and it seems that only a small part could be photographed at one time with a lens with a 5x magnification. The two took hundreds of images, stacked them, and joined them together to complete this image. 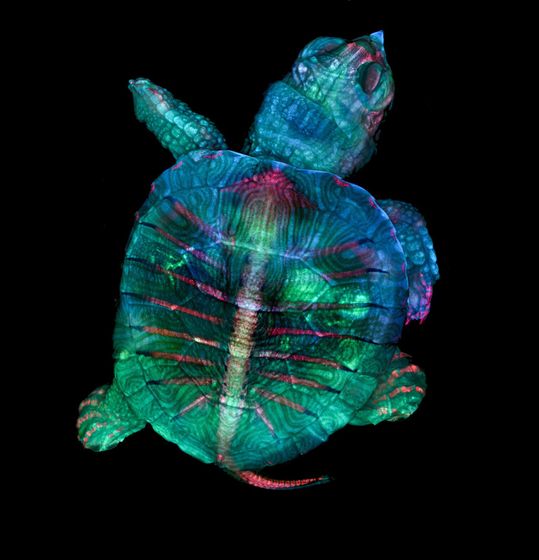 Howard Hughes Medical Institute , a non-profit medical research institute in the United States, ranked second. This photo is color-coded by depth, and the organs located inside the protozoa are colored blue and red. You can see that the outer shell part also has a gradation of orange and yellow depending on the depth. The magnification of the lens used for shooting is 40 times. 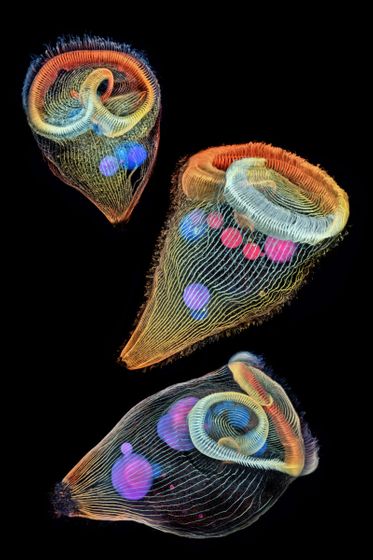 fluorescent antibody method, ' which uses a fluorescent dye to examine the location of antigens and antibodies in cells. If you look at the pictures taken with a 10x lens, you can see that the nerves as fine as fibers are projected in every corner, and the nerve density of the mouth and hands is high. ◆ 4th place: Male mosquito
A photo of a male mosquito is ranked in 4th place. The photographer is Jan Rosenboom of the University of Rostock, Germany. With a 6.3x lens, you can see the tactile sensation of mosquitoes and each compound eye. Only females stab humans and suck blood, and males eat nectar and spend their lives. ◆ 5th place: Snowflake
Snowflake photographed by photographer Caleb Foster in Vermont, USA won 5th place. When a snowflake grows in the plane direction, three hydrogen molecules are attached to one oxygen atom by covalent bond and hydrogen bond in the ice crystal. Then, the crystal grows in three directions where hydrogen atoms are attached, forming a beautiful hexagon. The magnification of the lens used for shooting was 4x. ◆ 6th place: White spider
A photo of a spider taken by Javier Rupérez of Spain ranked 6th. The specific species of the spider is unknown, and it is only described as 'white-haired spider'. It uses a 20x lens and is a single image created by superimposing multiple images. 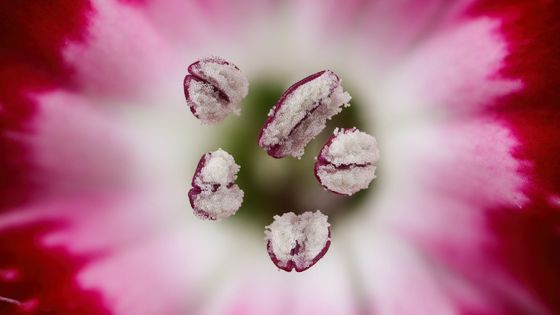 ◆ 8th place: Frozen water droplets
The photo that is too fantastic as if the waves of light are rushing to the center is 'frozen water droplets' taken by Garzon Christian of France. It seems that he used a lens with 8x magnification. ◆ 9th place: Cross section of tulip bud
Andrei Savitsky of Ukraine photographed the cut surface of a tulip bud. The petals before opening are rolled up, and the stamens located inside have a cut surface that looks like a butterfly. The magnification was 1x. F-actin is colored yellow, the nucleus is green, and the follicle cells are colored fluorescent red, so it looks like a bud or an insect egg waiting for flowering. The magnification of the lens is 10 times. 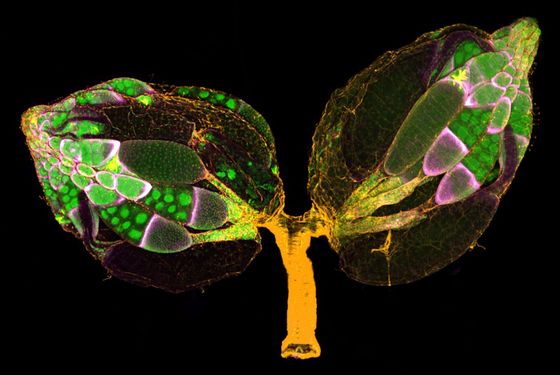 ◆ 12th place: Mosquito larva
The mosquito larva photographed by Anne Algar of England won the 12th place. It is said that the photographs using a 4x lens are overlaid, so the internal organs can be clearly seen through fine hair and transparent skin. 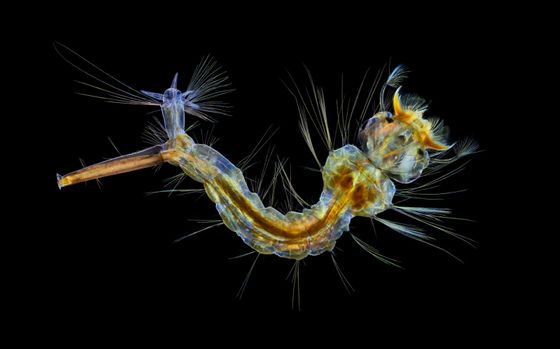 ◆ 13th place: Crystal of cuprite
Object cube are linked artificial look as if has been popped out from the world of SF is, Emilio Carabajal Márquez Dr. of Spain have taken

cuprite crystals. It was shot with a 20x lens. family , was ranked 14th. The photographer is Antoine Franck, who belongs to the International Agricultural Research Service CIRAD in France. It was taken with a 1x magnification lens, and you can see the leaves on which the Sasa spider is on. It's a picture that looks like eight eyes are glaring at you. 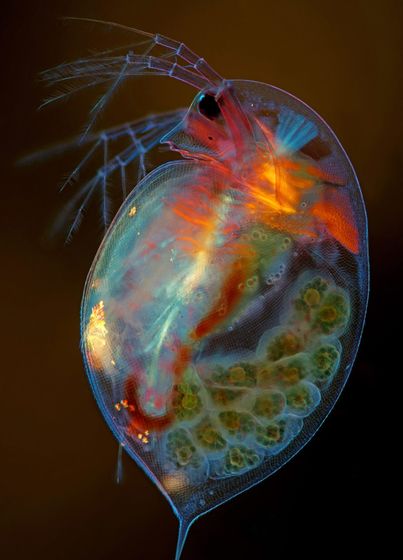 ◆ 17th place: Vitamin C
The 17th place was a picture of vitamin C taken by Karl Deckart of Germany. Vitamin C is a nutrient related to collagen synthesis, and if vitamin C deficiency continues, collagen cannot be synthesized normally, resulting in

scurvy . One piece of vitamin C that looks like feathers was taken with a 4x magnification lens. 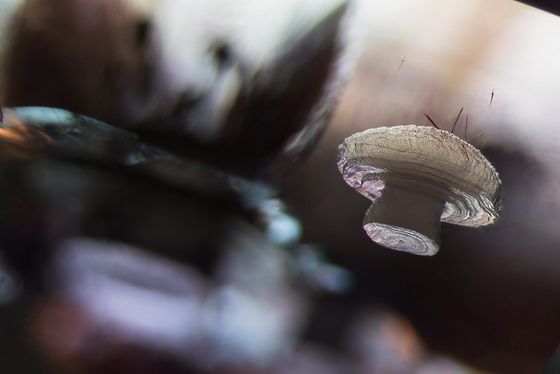 ◆ 19th place: Octopus embryo
Martyna Lukoseviciute and Dr. Carrie Albertin of Oxford University photographed an octopus embryo called the California Two-Spot Octopus. Although it is a young child, it already looks like an octopus, and you can see eight legs. It seems that he uses a 5x lens. 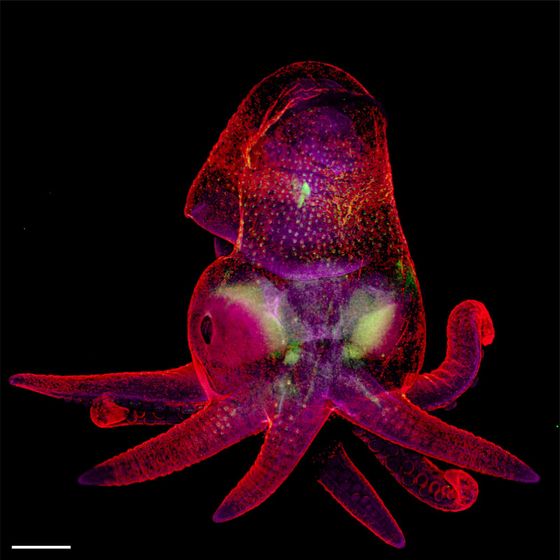 ◆ 20th place: Blood vessels of the heart of the mouse
A collaborative work by Simon Merz, Lea Bornemann, and Sebastian Korste of Essen University Hospital is a photograph of the blood vessels surrounding the heart of a mouse that died of a heart attack. It seems that tissues other than blood vessels have been removed for photography. The lens was double. In addition to the award-winning works introduced from 1st to 20th, many photographs are published on the official page as 'Honorable Mentions' and 'Images of Distinction'. 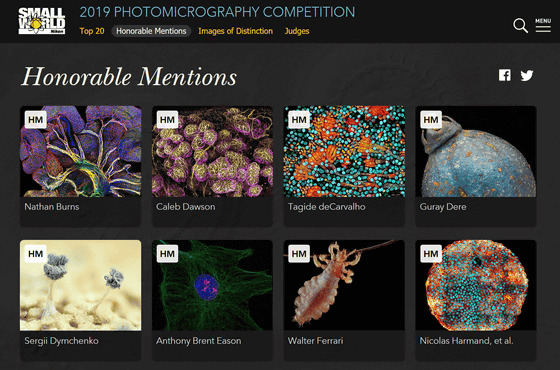