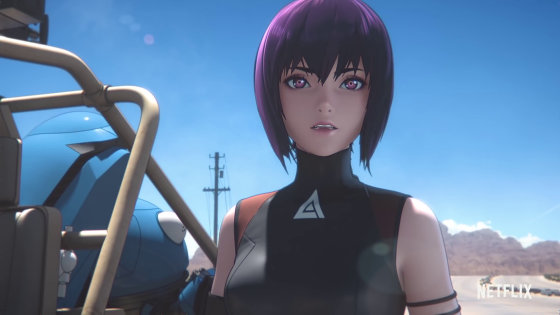 The teaser PV can be seen from the following. The voice of Motoko Kusanagi is in charge of Reiko Tanaka who played the same role in the movies “GHOST IN THE SHELL” and “Ghost in the Shell STAND ALONE COMPLEX”.


A teaser visual by Ilya Kubusinobu is also available.

Netflix launches exclusive worldwide distribution in the spring of 2020

`` The most important thing in diet is not dietary restriction '', exercise has an effect beyond `` calorie consumption ''-GIGAZINE

Sense of being able to become that Batman in PSVR is not odd 'Batman: Arkham VR' review-GIGAZINE

`` Star Wars flashmob! '' Where the main theme of Star Wars suddenly sounds in the city suddenly-GIGAZINE

Is it Moomin valley ?? (laugh) pic.twitter.com/O9p6ZP5OcB

Cute cats jumping together when showing a cat program pic.twitter.com/24kF1TjWa4

'I do it because it's fun'. “Researchers in the field” studying outside the university | Torus by ABEJA

Suspicion that a boy was bridged and faced arrested a deputy director of a nursery school: Asahi Shimbun Digital

There is no partition or cow trainer and it is embarrassed to put it on the cow because it is dirty, but my daughter's feces are very good. pic.twitter.com/WXiHylIlOX

A child who climbs the ladder in the order of the keeper and the mother lesser, followed by the child. Really ... #Asa Zoological Park # Red Pandapic.twitter.com/rB25blorHe

Although it is free of charge for childcare, the “pitfall of 120,000 yen burden” system pitfall: Asahi Shimbun Digital

Hamster who surely looks down on humans pic.twitter.com/x7YQjcwi0U

Isn't this cute every day after coming home? pic.twitter.com/HdClgiariT

It's the menu of the Meiji 8 banquet, but it ’s the best beef soup with the tapioca of the rainy day.

And of cuteness and the sound of the word 'Tappyoka' good Www Pic.Twitter.Com/jYPGZ9luYD

It's a pity that there will be no super candy corners that go with my daughter. pic.twitter.com/R6itV2Bs7G

I bought a cute dish at a secondhand store. The shop owner says that it was around Meiji, and the Noon guy is still snowy. Really? I thought, but anyway cute pic.twitter.com/jSojLuwJm1

Why the school board responds to violations of laws and regulations: Daisuke Fujikawa

I bought a Costco strawberry cake as a birthday cake. https://t.co/htZZl4pxTS

When I went to Myanmar with my wheelchair mother, I thought I was the king of a foreign country | Nami Kishida @ Mirairo | note

Attention to Mrs. Akie's costume at the throne of the throne-Togetter

Admiral Kankore “Prime Minister Abe, I am doing the right way of life with my palm inside.” → It was a fake manner of fake documents-Togetter

'Isn't it amazing that the day will change even for a moment just before the coronation?' His Majesty's Completely Weather Child ”→“ Temporary Cloud Sword Effect? The testimony of net users, such as the occurrence of a rainbow over the Tokyo just before the ceremonial court and the fantasy is too fantasy ''-Togetter

Is it correct that an Italian cooking employee criticized a customer who ordered two pasta items as 'insulting' or 'not a family restaurant'? (Toryu)-Individual-Yahoo! News

The ideal and reality of a programming school. About Fjord Boot Camp-Cat Rails

Study C language for 1-2 weeks.
Then, for some reason, a completely new language “Blawn” was created in a few weeks.

Received the Minister of Economy, Trade and Industry Award (general) for `` U-22 Programming Contest 2019 ''

Reason for making ⇒C language was difficult to handle (・ ・?)

This is my recommendation in the mosaic application to use when erasing reflected people, but every time you update it you can read the tonchiki explanation so I'm looking forward to it.pic.twitter.com/Xg8voZY1O4

What is lock-in? Is everything bad? 'Risk assessment and concept of lock-in in development' #AWSDevDay | DevelopersIO


TV anime “I was reborn as a villain daughter who has only the annihilation flag of the maiden game…” The first PV / April 2020 broadcast started! -YouTube

Nana Mizuki 'What? What? (Kireki)'

Why this game is not popular pic.twitter.com/TPIOoF0CNy

Let's dress all the brides in the world ... pic.twitter.com/yljgZLxgX0

'Deformation'
I made a slash ax from Monhan's weapon!
It should have been able to reproduce about half of the deformation mechanism.By the way, the necessary material is a cardboard scale.pic.twitter.com/PwxyLAAm9O

Use this when fighting in a game pic.twitter.com/3EXRH1gcRX

This is what happens occasionally when you look at TL. pic.twitter.com/Gh148X0yh8

I was told that the ED of the anime “Hoshiai no Sora” resembles my choreography. . pic.twitter.com/eIokttdYfa

Here is a video of the 40LINE Gachi group. pic.twitter.com/jEdo38sVAm

It was the new registration of SEGA would not only image authentication malicious pic.twitter.com/x7ok6BIAWM

Prince Teen's night outfit, military uniform style, but the collar was wearing a tuxedo and a bowtie was pics.twitter.com/gODSI2TgVb

A story of a male high school student who admires an adult and a female master of a coffee shop (1/12) # 珈 琲 steadily pic.twitter.com/sIOFfwTNqA

Uzaki-chan's blood donation poster has not made a noise for more than two weeks since it was put on, and it was not a problem even when it was a huge advertisement in the past ...

I think it's big whether Keiko Ota is interested in burning otaku content after all https://t.co/ll5bFxMsaq pic.twitter.com/o2Kmp2TUZ0

The case of the example hotel, also appeared on TV. # Tokudanepic.twitter.com / 6Fvl84HydS

Pillars that went to Sizepic.twitter.com/MOKvNafWsP

Senior and secret after school pic.twitter.com/t5kGu70GSf


I look back on my game school days because I am free-I can't develop without kelp.

'Simultaneous retirement delivery' talked about in Kaede and Biei holidays-What is Kaemi and what?

The editor of Kodansha Ranobe Bunko retweeted Yaraon's tweet, “You were able to put together Yaraon!”-Togetter

Since I was close to Kyoto Station, I played piano at Guerrilla Station!

Start from zero customers ...
All of you who came across

The piano installed at Kyoto Station, which is good or bad depending on the person who plays it, the woman just ago has transcended something and felt morbid after just listening for 5 seconds. When asked later, he was a professional pianist. Is it so different? Pros are scary. There will no longer be an opportunity to hear that close distance pic.twitter.com/rh7xRSXqST

Three types of 'Fuchi Bear Full' will be released from November 11th (Monday) as a set with eligible drinks-'Fuchi Bear Full' hanging from a cup etc. will debut! ! ~ | TULLY'S COFFEE-Tully's Coffee

[Notice] The collaboration pudding of the popular character “Babapapa” will be released for a limited time from Friday, November 1, 2019! -October 23, 2019