NASA has announced a new space suit “ Exploration Extravehicular Mobility Unit (xEMU) ” and “ Orion Crew Survival Systems ” for the “ Artemis Project ”, a plan to land mankind on the moon again.

A Next Generation Spacesuit for the Artemis Generation of Astronauts
https://www.nasa.gov/feature/a-next-generation-spacesuit-for-the-artemis-generation-of-astronauts

The space suit of the Apollo 11 era, which once made a successful landing on the moon by manned space flight, was unable to “walk on the moon” because of its range of motion, and moved “skip on the moon”. However, the new space suit `` xEMU '' announced by NASA on October 16, 2019 has a bearing system on each part of the waist, arms and legs, and the range of motion is markedly improved

It is also possible to turn around the arm and squat. In addition, parts such as the xEMU forearm can be removed and replaced. Various functions have also been enhanced. The portable life support system installed in the backpack part of xEMU removes carbon dioxide and other toxic components, odors and moisture contained in exhaled breath from the interior of the suit, enabling temperature control and performance monitoring. The system around the communication system has been redesigned, and instead of using the headset with a microphone that is currently used and the position of the microphone may shift, a system with multiple voice-actuated microphones embedded in the upper fuselage is installed. That was. Furthermore, the xEMU suit itself can withstand temperatures as low as minus 156.6 degrees to 121.1 degrees. 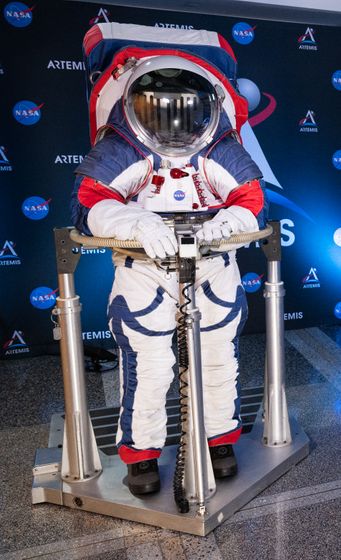 XEMU is a free size that can be worn by men and women of different heights and body types. There are cases where space suits of a size different from that of the ground are required if you continue to live in space for a long time, but the free size xEMU will not cause any problems even if the body shape changes. In March 2019, there was a plan for a female astronaut who was staying at the International Space Station (ISS) to commemorate `` International Women's Day '' and perform the first `` female-only extravehicular activity '' in history However, there was a situation where the M-size space suit was stopped due to lack of space suits. Since xEMU will be used for future outboard activities, the same situation is not expected to occur.

Another new space suit, Orion Crew Survival Systems , is a space suit for the interior of the Orion spacecraft , and for inboard use when launching a spacecraft or re-entering the atmosphere. The Orion suit is a custom-made space suit, not a free size, and the range of motion of the arms and legs has improved compared to the space suit for shipboard, and durability has been improved. In addition, up to six days of life can be maintained in case a meteorite drills a hole in the spacecraft. NASA has announced that the Artemis plan will be implemented by 2024.