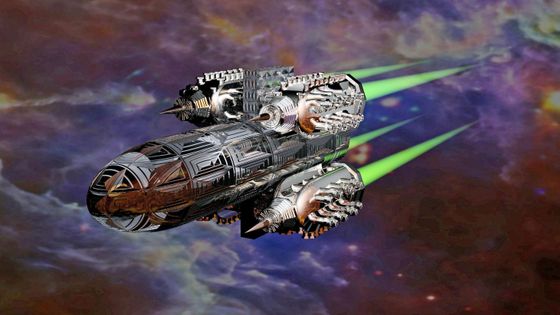 NASA engineer David Burns used special theory of relativity to devise a 'helical engine ' that could theoretically accelerate to 99% of the speed of light.

The mechanism of the helical engine itself is simple, and New Scientist uses a movie to show the mechanism in an easy-to-understand manner.

Suppose you have an object in a box on the floor that can move back and forth. Also, we do not consider friction in this space. In the figure below, the left side is 'rear' and the right side is 'front'.

Suppose you move this object forward using a spring attached to the box. Then, the box moves backward according to the '

When an object collides with the front part of the box ...

The collision causes the box to move forward and the object to move backward.

The object that moved backward collided with the rear of the box this time. This causes the box that was moving forward to begin to return backwards, while the object moves forward. If there is no energy loss due to friction etc., the magnitude of the collision between the object and the front part of the box and the collision between the object and the rear part of the box are the same, so as a result, the box only moves back and forth periodically. There is no such thing as 'going to either one'.

The devised helical engine adopts the conclusion of the special theory of relativity that 'an object gains mass when it approaches the speed of light'. Ions are used as 'objects that move back and forth' in the previous figure, and a strong magnetic field is applied to accelerate the ions that collide in front of the engine to increase the mass, while decelerating the ions when they collide with the rear of the engine. It is a mechanism to obtain thrust by letting it reduce the mass. According to Mr. Burns, if the helical engine is driven for a long time, it can achieve speeds up to 99% of the speed of light.

However, the helical engine is just a concept, and various problems are raised. According to estimates, a huge engine with a length of 200m and a diameter of 12m is required to obtain a thrust of 1 N with an electric power of 165MW. We also need a “friction-free space”.

Chris Lee, a physics professor at the University of Applied Sciences in the Netherlands, said, 'When you accelerate an ion with an electric field, the electric field has a force that pushes it back, so this engine doesn't work.' I am. Mr. Burns frankly acknowledged the problems to be realized and said, 'It is really difficult to invent an idea that can be put to practical use. Even if it is said that it is an idea that can not be realized, make it public. Is worth it. '