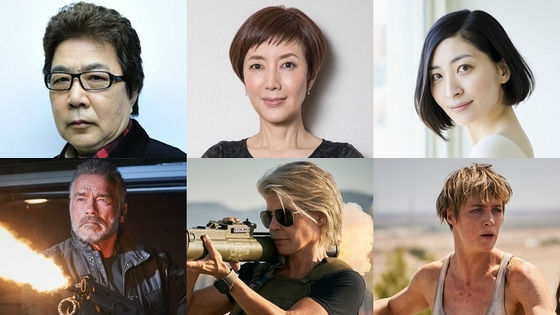 Dubbed voice actors for the movie ' Terminator: New Fate ' released on Friday, November 8, 2019 have been decided. 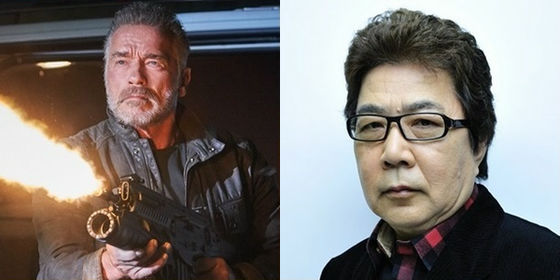 Sarah Conner, who plays Linda Hamilton, is Keiko Toda, who was in charge of the same role in the TV version of the first series “Terminator”. 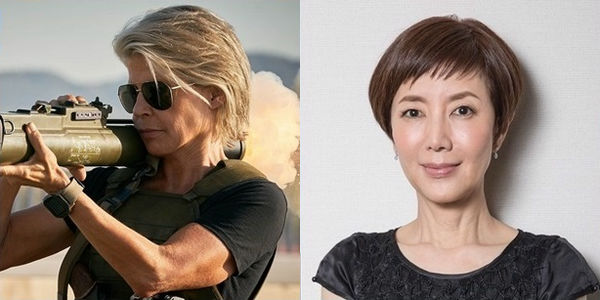 The new Super Soldier Grace (act: Mackenzie Davis) is in charge of Maaya Sakamoto, who plays an active part in the role of “Ghost in the Shell ARISE”. 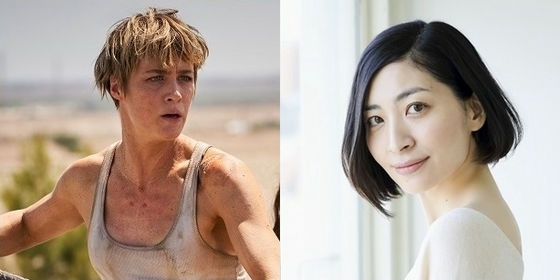 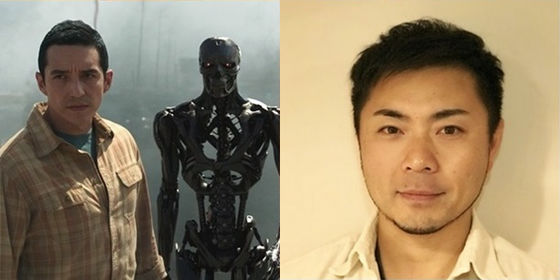 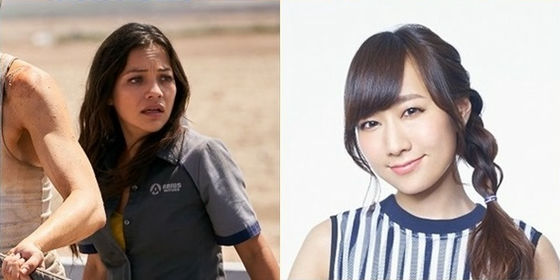 The role of Miguel will be Kento Ito, who plays the role of SEM Michio Michio at 'The Idolmaster SideM'. 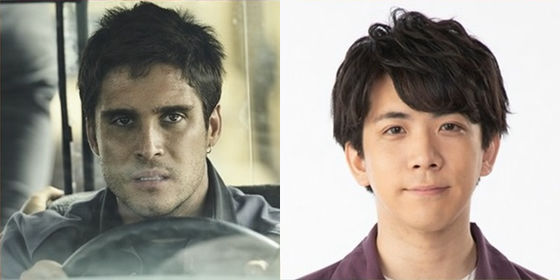 What happens to the world if all humans suddenly disappear from the earth? -GIGAZINE

Clearly that people have settled in one place since the Stone Age 60,000 years ago-GIGAZINE

The possibility that female ovaries can create new eggs-gigazine

In preparation for a typhoon, I put it in a car to evacuate the bigon, but it's grass.pic.twitter.com/iNqkwxf3pm

When I dyed Sylvania, I missed the amount and became mosspic.twitter.com/uCsrxDwTG2

[Sad news] When I fried fried rice outside the university, a bee shit big bee stopped at fried rice.
I gently closed the lid. pic.twitter.com/psJy5lbcHo

◆ Science (Science / Academic / Technology)
Is Typhoon 19 Equivalent to “Category 6”, Between Calm and Passion-Adventure around Netroa

Dawn is a viaduct that was generated in Wuxi. I don't think the person who laid down was definitely saved. . pic.twitter.com/ogHkOKRPJp

Australia's Uluru banned from climbing from the end of this month, criticism of rushing visitors 3 photos International News: AFPBB News

Kanden, who showed dishonesty to lose his words, translated his wounds every time he met (Keiko Ishikawa)-Individual-Yahoo! News

Seven & i, not only 7pay but also Kobayashi Tsuyoshi, who exposed Kobayashi Weak, cut off

[Wide range of violent winds] From 12th to 13th, violent winds blow in a wide range of western Japan, eastern Japan, and Tohoku region, and there are places where record storms occur. There is also the risk of a storm similar to Typhoon No. 15. The sea becomes a fierce storm, and watch out for storm surges. It is important to refrain from unnecessarily going out. pic.twitter.com/Rie6FqhB0a

[Preparation for today] #Typhoon # 19 is expected to land in the Tokai region or Kanto region while maintaining a very strong power from evening to night on the 12th. To protect your life and the lives of important people, use information to make early decisions before the storm begins to blow and before it gets dark. (Continued) https://t.co/lf7LZ35dus pic.twitter.com/NiKUciAdOS

Ogasawara has already been affected by Typhoon No. 19, but it is rain and wind despite being quite far from the center of the typhoon (; ´д ｀)

If you hit directly on the typhoon course, I feel that the damage will be considerable ... Please take care of everyone on the mainland (> _ <) pic.twitter.com/axwr8v2102

This is a video of someone last year's Typhoon No. 21 coming to Osaka. Because it is said that it exceeds this scale, please be safe. # Typhoon 19 pic.twitter.com/qVa2BSsBtH

I was afraid of being misunderstood, so I actually broke the glass at the factory!
It doesn't mean that it won't break if you stick rice tape. After breaking, it becomes difficult to fly by vibration and wind. I hope you will recognize that it is effective in preventing secondary disasters. # Typhoon # Healing tapepic.twitter.com/F3n75pqiDv

It seems that there are a lot of people who do n’t know ...
If there is a power outage in the event of a natural disaster, all the house breakers will be off!
Otherwise, there could be a fire if there was a leak during recovery.
Ultimately, you have to protect yourself.

↓ Brief explanation, at the time of the first power failure. When the second sheet is restored. pic.twitter.com/SOIcjFu4Pa

Those who live in the disaster area of Typhoon # 15.
Chiba is a devastated area ...
Be prepared for water, food, batteries, flashlight, gasoline, etc. in preparation for Typhoon # 19. My home secured 30 liters of water, but it was not enough. It will be like this even if it is shuttered. Break the window glass. I thought it was okay. wrong. pic.twitter.com/60QWyYUaUF

I really want everyone in Kanto. Be prepared for typhoons and make evacuation decisions and actions without hesitation according to the evacuation information before it becomes impossible to go out! Typhoon No. 19 landed in the Kanto-Tokai area from evening to night on the 12th, a record heavy rain over 400-600mm in Kanto, and a record storm with a maximum instantaneous wind speed of 60m / s (216km / h). It is a very dangerous situation of historical disaster class. Protect your lifepic.twitter.com/3yw0yf8C1f

Akabane's super pic disappears from strong liquor before the typhoon.twitter.com/0i5CxKHorQ

In Okinawa, the tape is not attached to the window glass with a batten.
Affix it so that rainwater does not enter. Let's stick film or cardboard inside to prevent scattering. If neither is available, a trash bag can be substituted. #Typhoon measurespic.twitter.com/wUNQcj64uj

Is it the design of the premise that Edogawa Ward is sacrificed? Pic.twitter.com/119tYZanVU

All the escort ships have left Tokyo Bay. . . pic.twitter.com/4MNi55X2rr

16th century ring that unfolds into an astronomical sphere pic.twitter.com/9sQ777ku4Z

An acquaintance working for a home center, “I'll buy high-quality sweets. If you buy high-class confectionery and include it in your disaster prevention food, your mentality will be different. -Togetter

I want you to see pictures taken by taking the Churaumi Aquarium alone pic.twitter.com/ccLNmh1li9

In the morning, I found a bear near Ichijouji Station in Kyoto. A distance of about 1 meter. I got in a car in a hurry. I didn't feel like I was attacking, but I walked around the car. Number 110. Part of the video. # Bear # Kyoto # Sakyo-ku # Bearpic.twitter.com / hlcKivfeRS

For the first time, the smartphone “BASIO4” is now available for easy and convenient use | News Releases | Kyocera Corporation

A story that could not prove the problem of eating log 3.8 using data analysis-konkon3249's diary

Those who turn off airplane mode or power off to save battery such as smartphones due to power outage made LINE or Twitter SNS icon for that time, so use it if necessary https: // t. co / KMyFJUkos5 pic.twitter.com/P1qJ4vNqTY

Carry “iPhone 11 Pro” instead of a SLR camera. https://t.co/NdomgtJ1o8

`` It was an incident that could be prevented just by unplugging the outlet '' It is better to unplug the power supply of precision equipment before a power outage or lightning strike `` After the typhoon, you will get a phone replacement for modem replacement ''-Togetter

& quot; Tap where there is nothing and cancel & quot; is ant for UI / UX-Qiita

I tried running a web service made with Firebase for 3 months, I was addicted / I wanted to know-Qiita


Nobunaga's ambition When he first did it, the warrior wwww who said, “It ’s not as good as it is famous…”: Nanjiee Stadium @ NJ Summary

The 3rd PV of the TV animation “Die if you come to Budokan” starts broadcasting on Thursday, January 9, 2020! -YouTube

I found a play video of `` Anpanman keeps whispering horror man in a car '' that I continued doing in my childhood ethics is the most lacking in the world pic.twitter.com/TcHcSt79nC

A ghostly pic of ramen covered by each person who celebrated his birthday pic.twitter.com/tJMxYAJvot

Is it normal with drugs? I got the sense of smell. Please read it because it was so impressive that I made it into a comic. Turn off when embarrassed.
* Since I think that it is not the original use of the medicine, the name of the medicine is hidden. pic.twitter.com/AhiI0gUpZI

When the typhoon hits directly, don't go outside, don't open the door in an interesting way (the door blows away or closes strongly with the wind and loses your worst finger), wait for it to pass away in the house I'm so scared at night.pic.twitter.com/whIszyP7jv

On October 24th (Thursday), the latest work of Chunism series “CHUNITHM CRYSTAL” will be launched! With the new characters, the new story has begun!
We will be announcing new information in the future, so look forward to it! !
`` CHUNITHM CRYSTAL '' teaser site → https://t.co/uytw2kf0r0 pic.twitter.com/uKTZ9MKZHX

`` A demon preparing for a typhoon '' pic.twitter.com/EeilxnbBGS

I'm going to be a child outside! # Nice cat stuff # Nice dog stuffpic.twitter.com/RoIuAiWudM

Liza Atelier's photo mode, you can do anything, a lump of dreams pic.twitter.com/adQ2uLyBbl

It looks like a typhoon to us, but the night of Walpurgis will come and Homurachan will fight pic.twitter.com/5aKsqYiI5p

Suture tape that suddenly increases demand and wonders about something pic.twitter.com/YBAgLGriHX

The story of a jacket with a small senior from our company. pic.twitter.com/lghhlJ0ndh

It's a memory of last year's typhoon that I put in my personal account. It was an area with relatively little damage in Osaka. The boss's house in the same city had a power outage for one day, and the company's house had a power outage for half a day or two. From then on, clothespins no longer lie on their side. pic.twitter.com/1IZ2McQkjj

How good was it if he was a classmate with Yuka ......... pic.twitter.com/EwycPsU9MI

Otaku at the time of power failurepic.twitter.com/m6Jk540Emf

I want to recommend to those who self-catering is not followed Zuborameshi food 9 election pic.twitter.com/zQ08Dwhyns


Illustration of windows reinforced with tape |


“ # Horse Racing Strongest Law ” will begin its history with the November issue.
We look back on the 28 years since our first issue in 1991 with cover, betting, early ears of hell, and more!
Of course # Chrysanthemum Award # Emperor Award (Autumn) # Elizabeth Cup # JBC 's capture point thorough analysis! #The final issue will be on sale October 12th (Saturday) at bookstores nationwide. pic.twitter.com/sxFL1ktikd

Director Yano “I have only 4 consecutive wins”] What J] Summary Taro!

[Good news] Mr. Fukumoto was the first place in history for both the Akahoshi and Kataoka styles!

My life is messed up-Ryoko Hirosue laughs and talks, 'I am not Maria?'-Yahoo! News