Past research has found that zebra patterns have the ``

possibility of avoiding blood-sucking animals '' and that `` monochrome pattern body paint actually has an effect of keeping pests away '' . Meanwhile, an experiment in which a striped pattern was applied to a cow and the state was observed confirmed that 'drawing a zebra pattern halves the number of flies on the cow.'

The flies that inhabit the world, including Japan, are insects that have the ecology of sucking blood from mammals, unlike ordinary flies, which is a serious problem especially for livestock such as cattle and horses. Cattle attacked by a fly fly lose their exercise and appetite from stress and cause symptoms such as insomnia, which can cause the beef cattle to lose weight and significantly reduce the amount of milk they produce. According to one estimate , the amount of damage caused by these fly flies amounts to about $ 2.2 billion annually in the United States alone.

For this reason, livestock producers are taking measures such as using insecticides, but strong insecticides are not only harmful to the environment, but are also concerned about the damage to human health. Moreover, pests quickly acquire resistance to pesticides and are not a fundamental solution.

Researchers at the Aichi Prefectural Agricultural Experiment Station , who had been exploring more drastic fly countermeasures, therefore focused on the hypothesis that zebra stripes have the effect of inhibiting the movement of insects to the body surface. An experiment was conducted to actually apply a striped pattern to cows.

Specifically, six Japanese black beef were divided into “black and white striped cows”, “black cows only” and “unpatterned cows” and tied together with ropes. The reason why cows with only black lines are prepared is to verify the possibility that paints can drive away flies rather than patterns. In addition, after the pattern was applied, the paint was thoroughly dried to prevent the vaporized chemicals from affecting the fly's behavior.

The observation of taking one photo every 30 minutes for 30 minutes was divided into morning and evening, and the number of flies in the photo and the frequency of “repellent behavior” performed by each group of cows. I investigated. The repellent behavior is an action for the cattle to drive away insects on the body surface. It is classified.

The result of such an observation experiment is the following image, the top is the “number of flies” graph and the bottom is the “frequency of repelling behavior” graph. Each bar graph represents cows with no pattern, striped pattern, and black line only from the left. As a result of the three-day observation experiment, the number of flies attached to the cows with the striped pattern was only half that of other cows. Also, repellent behavior, which indicates that you are suffering from flies, has decreased by about 20%. 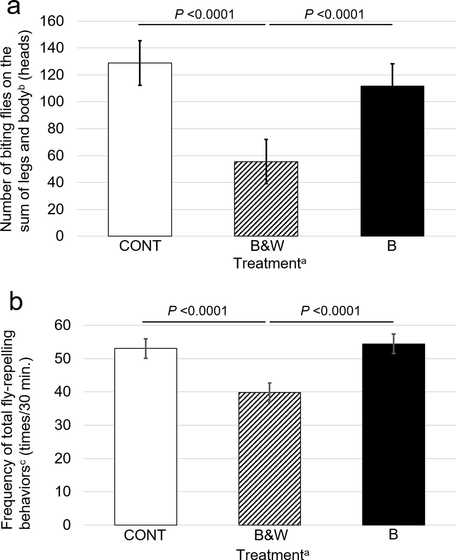 In a paper, the research group said, “By simply marking a cow like a zebra, the damage caused by blood-sucking flies is halved. The paint that lasts for three to four months If it is developed, it can be put to practical use in the livestock industry. ”He stated that this research will lead to the development of pest control measures suitable for animal welfare and environmental protection.