“ Mini Tokyo 3D ” is a map that allows you to view the operation status of public transportation in Tokyo on a 3D digital map. Developed by engineer

Akihiko Kusanagi , Mini Tokyo 3D can be accessed from a PC / smartphone web browser, and you can see the real-time movements of JR, private railways, subways, etc. running in the Tokyo metropolitan area as if you were looking at Plarail or a model train You can observe in a good mood. A 3D model of a rectangular parallelepiped running on a colorful line is a train, and the location of the train is reflected on the map in real time according to the actual diagram. When you move the cursor over, the route name and type, train number, and scheduled departure and arrival times are displayed. Below is the place where I pulled the camera from the map. The railway network depicted in Mini Tokyo 3D is limited to running in the Tokyo metropolitan area. The orange round light means that the train is behind schedule. When I actually put the cursor, the delay information was displayed. Mini Tokyo 3D doesn't just play train diagrams, it reflects real-time delay information instantly. 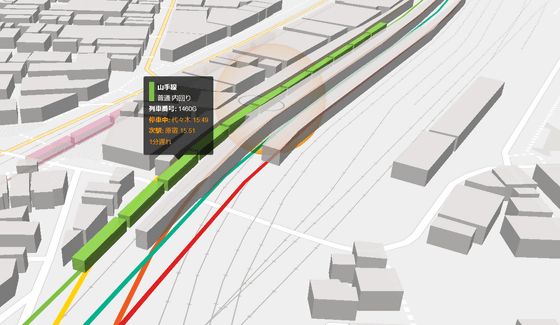 Click the eye icon on the right of the screen ... A train running underground will be clearly displayed. You can see a total of 13 routes and 285 stations of Tokyo Metro and Toei Subway along with a map, and you can clearly see that Tokyo is one of the world's leading metro networks. Click the eye icon again to return the camera to the ground. In addition, it is not only the train that is reflected in Mini Tokyo 3D. For example, when we approached Tokyo International Airport in Haneda, Tokyo, a plane take-off and landing was also drawn. Of course, if you hover over the airplane model, you will see the airline, flight number, destination, status, and departure time. If you look closely at the airplane model, there was a small difference that the tail of Japan Airlines had a red tail and that of ANA had a blue tail. Regarding the development status of Mini Tokyo 3D, Mr. Kusanagi has tweeted on Twitter since June 2019, and it is summarized in the following Togetter. According to Ms. Kusanagi, Mini Tokyo 3D uses an API that can obtain timetables and operation information that is available for free at the Tokyo Public Transportation Open Data Challenge . In addition, although it was originally developed in 2D, it seems that it was changed to 3D version on the way.

The source code for Mini Tokyo 3D is available on GitHub.