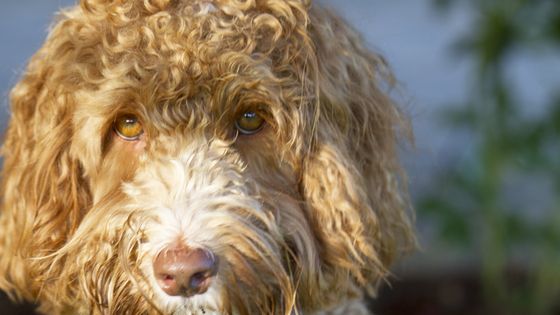 Labrador Doodle was born by crossing a Labrador Retriever and a poodle as a “service dog for people with animal allergies,” and is a breed that combines the loyalty of a Labrador Retriever with the lack of poodle hair loss. However, Wally Conlon, the creator of Labradoodle, recalls that 'I opened Pandora's box and released Frankenstein's monster'.

The first ever labradoodle wasn't a designer dog, he was a guide dog-Science News-ABC News
https://www.abc.net.au/news/science/2019-09-23/labradoodle-guide-dogs-designer-regret/10717186

Labradoodle was born from a letter delivered to the Royal Australian Guide Dog Association. Patricia Blum, who lives in Hawaii, who sent the letter, wanted a guide dog because of a visual impairment, but her husband had severe animal allergies and had to give up the guide dog.

Konron, who knew that, would immediately start raising a standard poodle . Konron initially thought that Mr. Blum's wish would come true. Because the standard poodle has less hair loss, it is not only suitable for animal-allergic people, but also because it has a working dog role. Photograph of Mr. Konlong and the dog. From left to right, a female Labrador Retriever brandy, three puppies, and a male standard poodle harley. After sending these three puppy hair and saliva samples to Hawaii, one passed the allergy test. Due to the nature of the guide dog, Konlon immediately named the puppy Sultan and sent it to Hawaii. Sultan and Blum, who became trained in Hawaii and became good guide dogs, became a famous combination in Hawaii.

An article in a local newspaper reporting on Blum and Sultan. 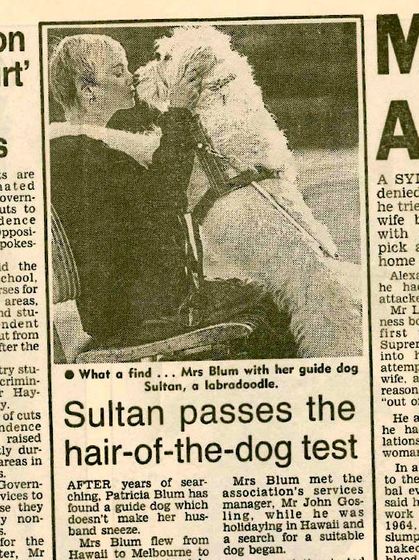 Konron, who felt that Sultan was a dog as he thought, thought that he would pull the remaining two, Simon and Sheikh. However, because everyone wanted a purebred dog, the two hybrid takers did not appear after six months. Therefore, Mr. Konlon, who came up with the idea of selling two dogs as a new breed, visited the public relations department of the Victoria Guide Dog Association and asked, “Why don't you sell a new breed“ Labradoodle ”that is smart and has little hair loss?” I will bring it up.

When the Victoria Guide Dog Association actually promoted Labrador, it quickly became a response, and the Victoria Guide Dog Association was flooded with orders from guide dog centers, visually impaired people, and animal allergies. So, in order to respond to the voice of hope for Labradoodles, Konlon further crossed Labradoodles, but soon realized that it was a mistake. Because the hair of newly born puppies was disjointed, only 3 out of 10 were able to pass the allergy test. Also, not only the appearance but also the personality and ability are uneven, and it was not very suitable for guide dogs. Later, it has become clear that there are many individuals with abnormalities in the elbows, knees, and hip joints due to genetic abnormalities, and those with epilepsy.

Still, the demand for Labradoodles was first, and when news was reported that former US president Barack Obama is considering keeping Labradoodle to consider daughters with dog allergies, Labradoodle's popularity Increased further. So Konron wrote to Obama: 'If you buy labradoodles, please read your pedigree and check your parents. Many labradoodles are unsuitable for training and not good for allergies.' I sent a letter. It is unclear if Obama read it, but in the end Obama did not choose Labradoodle as a “first dog”.

The portugies water dog Bo that Obama chose as the first dog. While Konlon was always a professional breeder, keeping healthy puppies in mind, many Labradoodle breeders who “ride the trend” were not. Mr. Konlon, who retired from the breeder, said, “The puppy factory by ruthless breeders who are only interested in making money around the world is raging, and they are finally thrown away and euthanized in the facility. “There are some ethical breeders, but only a handful.”

There are also many new breeds that have been influenced by the birth of Labradoodle. The various poodle hybrids, such as Cavoodle , Groodle , Jackapoo , Schnoodle, and Goldendoodle , are all dogs that were born out of Konron 's Labrador Doodle commercial success.

Today, Mr. Konlon is recognized globally as the first breeder to create Labrador, but Mr. Konlon said, “I ’ve never been proud of it. ' According to Konron, who was interviewed by Psychology Today , a general journal specializing in psychology in 2014, `` I raised 31 Labradors during my career, but now I am living with pensions with Rocky and Jazz from Labrador Retriever 'If you sell more labradoodles, you might have been rich and live in a mansion, but your conscience did not allow it.'

After working as a guide dog in Hawaii, Sultan returned to Australia after retirement and spent three years with Gosling. After his death, he was buried next to his father, Harley.

Gosling, who guided the Australian Broadcasting Corporation interview staff to Harley and Sultan's tombs in the backyard, said, “Many people need good guide dogs, I did what I needed to do, I did my best, ”he said.