'The Legend of Zelda: A Dreaming Island' reborn with Nintendo Switch is a good work that old and new fans can fully remake old-fashioned trauma machines `` The Legend of Zelda: Dreaming Island '', which was popular with Game Boy, who draws a link adventure lost on a mysterious island on the way of the voyage, will be remade on Nintendo Switch on Friday, September 20, 2019. did. This work, which has been reborn as 3D graphic since its release in 1993 over 26 years, is said that not only the field and dungeon of the Game Boy version, but also the trauma machine is faithfully reproduced, so let's play immediately. It was

The Legend of Zelda: A Dreaming Island | Nintendo Switch | Nintendo

The opening movie plays when the game starts. The figure of a person riding a ship in the raging sea. The main character, Link, is operating the ship with a deadly look. Whether the storm has passed or not, the stage changes all at once and the atmosphere is like clay animation. A girl named 'Marine' holds a link where the ship is wrecked and collapses on the beach. This is the opening. When the opening movie is over, the start screen will be displayed with a large egg sitting on the top of the mountain in the background. Up to 3 save files can be created, and auto save is also supported. You can freely decide the name of the character, and once the name is decided, the game starts. 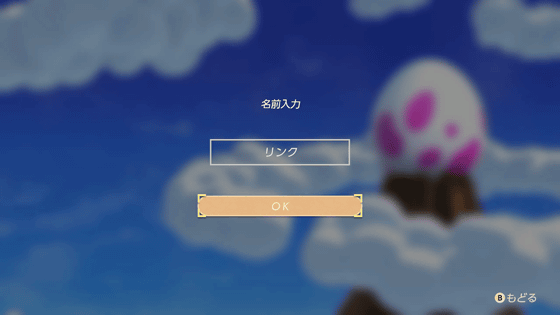 The game starts when the linked link wakes up at Marin's house. Apparently, the link seems to have arrived at an island called 'Kohorint Island'. The first goal is to get the lost shield and sword when the ship is wrecked. When I talked to my uncle 'Tallinn', I got a shield. Although it is possible to do something like 'destroy the acupuncture points of another person's house' in the game, it seems that the chest of drawers in the person's house cannot be opened. When you leave your house, you will find a peaceful view of the village of 'Meve'. A link that came to the beach looking for a sword. The beautiful sea and sandy beach are surrounded by monsters. Upon discovering the sword, a mysterious owl will appear, showing how the link should exit the island. Apparently, it is not possible to escape the island by means of transportation such as a ship, and it is impossible to leave the island unless you cause a 'fish of the cold'. The Link adventure begins to provoke a cold fish. You can also check the flow from the beginning of the adventure to getting the shield and sword in the following movie. Not only has it become three-dimensional with 3D graphics, but the focus has been added to the links, and the edges have become blurry, giving the screen more depth.

Switch version `` The Legend of Zelda: Dreaming Island '' Summary of the opening scene-YouTube


As the adventure progressed, it became clear that eight instruments were needed to provoke a cold fish. The instrument is hidden in a dungeon, and the Zelda Legend series explores the dungeon while doing the familiar 'mystery'. Inside the dungeon, the Game Boy version of the gimmick is faithfully reproduced. There is a horizontal scroll map in the dungeon, and you can encounter familiar monsters. You can also check the inside of the dungeon with the following movie.


Defeat the boss in the deepest part of the dungeon ... We will collect instruments for raising the cold fish. The cold fish is the god of Kohorinto Island, and is also the title of the song Marin sings. The singing voice of Marin has been remade and has evolved more beautifully, and you can listen to the song in the movie below.

`` Kaze no Kana '' sung by Marine from the Switch version of `` The Legend of Zelda: A Dreaming Island ''-YouTube


For those who have played the Game Boy version, there was a familiar trauma 'Dorobo'. The following movie is a summary of why the link came to be called 'Dorobo'. Please note that if you play according to this video, the name of the link will be forcibly changed to 'Dorobo' after that.


Nintendo Switch 'Legend of Zelda: Dreaming Island' can be purchased for 6458 yen including tax, and at Amazon.co.jp the package version was available for purchase at 5622 yen including tax.