Google announced a new feature that will be added to Chrome, which celebrates its 10th anniversary. In the Chrome version of the app that will be updated in the fall of 2019, `` tab grouping '' and `` tab sharing with Chrome on other devices '' are included, and tab and search bar functions are available in both the application version and the PC version It will be strengthened.

Get more done with a little help from Google Chrome Drag and drop to another tab. 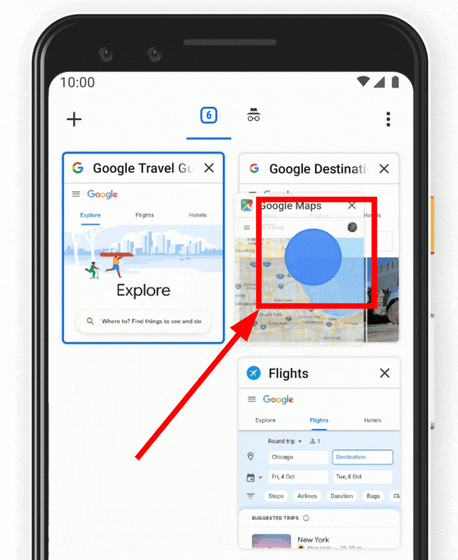 Then the tabs are combined into one. This is the newly implemented 'tab grouping'. In tabs grouped, a tab switcher is displayed at the bottom of the screen, making it easy to switch tabs within a group. ◆ High-speed display of page title
At the time of article creation, if you place the cursor on the PC version Chrome tab for 1-2 seconds, the page title will be displayed, but the new function will display the page title and URL at high speed like the following movie.

Raise your hand if you've lost track of how many tabs you have open right now? Stay organized while browsing with new improvements to Chrome, coming soon → https://t.co/HERynMt09U pic.twitter.com/2GLcAH2dsJ

Also, the page preview will be displayed during 2019.

◆ Sharing tabs
The “tab sharing” function can be used when “I want to see this site on a large PC screen”. First, tap the menu button in Chrome of the app ... Next, tap “Send to your devices”. Another device using Chrome will appear, so tap the device you want to send a tab to. Then, when you start using the device that sent the tab, a pop-up will appear, so you won't forget the site you wanted to see later. You can also customize the look of the browser by selecting a theme. In addition to the above, it is said that we are refraining from adding or updating many functions, and we are planning to announce those that are not listed here after the fall of 2019.