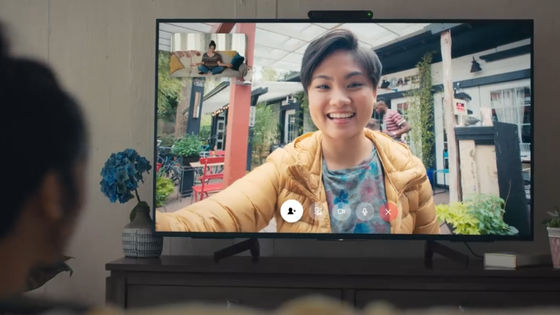 With the new video chat terminal “ Portal ” released in 2018, Facebook announced “ Portal TV ” that enables video chat by connecting to a TV . Meet the New Portal Family: Smart Video Calling on Your TV and Anywhere in Your Home | Facebook Newsroom
https://newsroom.fb.com/news/2019/09/meet-the-new-portal-family/

'Portal' is a smart display terminal equipped with voice assistant Alexa and video chat with Facebook Messenger, 10.1 inch 'Portal' and 15.6 inch 'Portal +' were released on October 8, 2018 It was.

Portal TV can be used for video chat using Facebook Messenger and WhatsApp by connecting to a TV with an HDMI cable and logging into your Facebook account. The size is 190mm in width and 32mm in height, and the news site The Verge describes it as ' a device that makes Microsoft Kinect slim .'