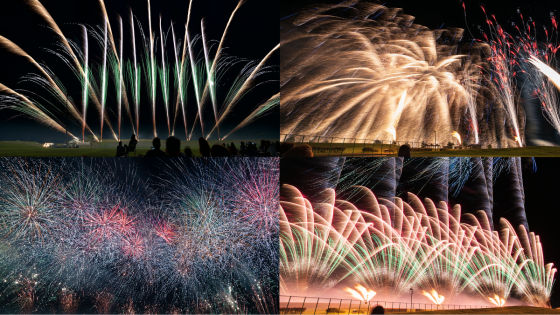 Fireworks companies that exist in various parts of Japan have their own characteristics, and in the case where one company handles all of the fireworks displays, you can especially see the individuality of the company.

Oga Japan Sea Fireworks held on August 14 in Oga City, Akita Prefecture, famous for Namahage Is a fireworks display operated by Kita Nippon Fireworks Co., Ltd., which specializes in character fireworks, comical productions, and artistic productions such as doraneko and smile. I will report what kind of characteristic fireworks can be seen. First, head to the venue. Welcome to the Oga Information Center at the entrance of the Oga Peninsula. You can also look down on the venue from Mt. Tripods for shooting fireworks were lined up from here. We will head to the venue around 18:30 when the roadside station near the venue kills time and the heat has eased. 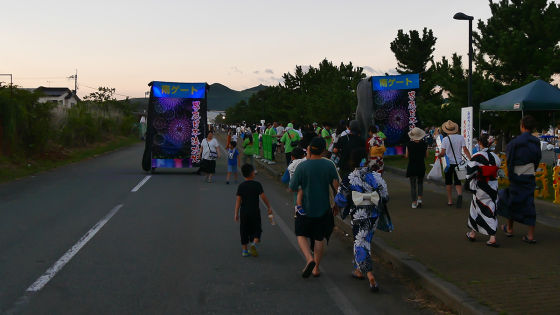 Unique program structure that is also a feature of this fireworks display. In 2019, the theme is “If Homomono World”, and each program is titled “If it was XX”. 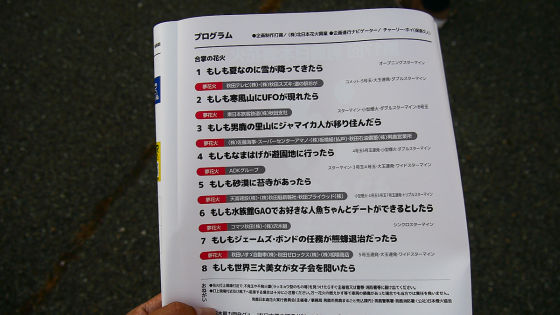 A sponsorship fee of 1000 yen (including tax) is required to enter the venue. State around 19:00. A sufficient number of stalls were prepared, but there were still many people lined up and it was a great success. The place where you actually watched the fireworks is 20000 yen (including tax, up to 6 people) for a mass seat near the launch site. 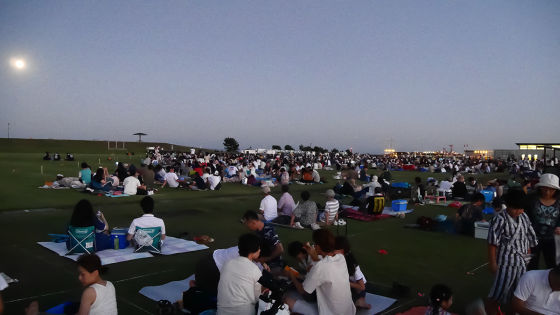 Hisato Hoizumi ) announcement began as the fireworks display started. After polite explanations such as how to evacuate in the event of an earthquake and thanks to the volunteers, “Let's join hands for ancestry to our ancestors” and requiem Fireworks rose. Wait for the start of the fireworks display in a warm atmosphere. 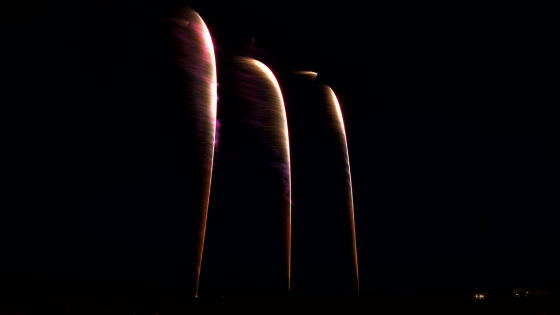 The fireworks display begins at 19:30. The opening fireworks titled No. 1 “If it snows in the summer”,

Mariah Carey 's “Christmas of Lovers” flows, and it looks like a white snow, red and green Christmas tree decoration Fireworks have gone up. The background music includes a song of the frog, and expresses the winter if it is summer. Then, after the fireworks of the type that would be UFOs rose, fireworks representing stars such as fireworks with Saturn rings rose one after another, and it was like a space trip. Apparently it was taken away by UFO. In No. 3, “If a Jamaican moved to Oga no Satoyama”, reggae-style “Yosaku” flowed to the BGM and fireworks rose. The Jamaican seems to live in a village village. Fireworks expressing scenes such as cutting trees, the blueness of the Jamaican sea, and the sun were also rising. In No. 4 'Moshimo Namahage goes to the amusement park', the fireworks of the northern Japan fireworks industry will go up one after another. Many characters such as Namahage, cats and pigs were up. At the end of the fireworks, an announcement was made saying “People who saw Namahage-sama”, and the surrounding visitors responded with “Yes”. 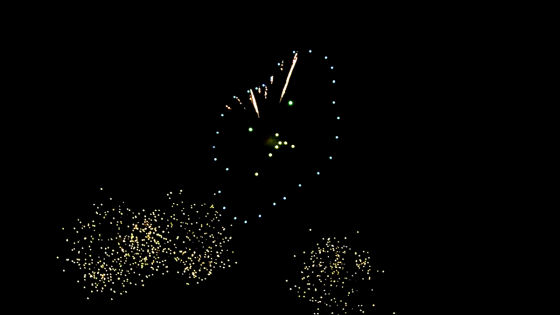 No. 5 “If there is a moss temple in the desert”, in a relaxed Japanese-style BGM, green fireworks went up one after another, creating a scene with moss growing on one side. 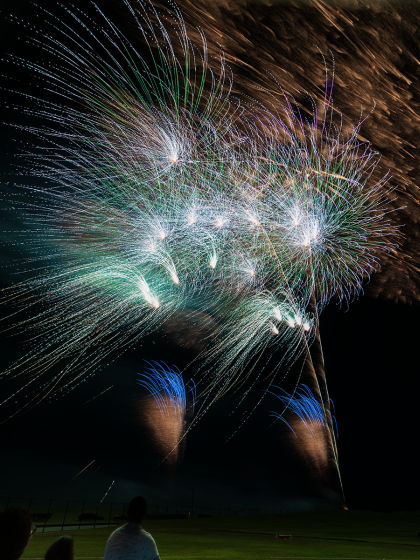 In this way program that expresses if the world will continue to progress one after another. 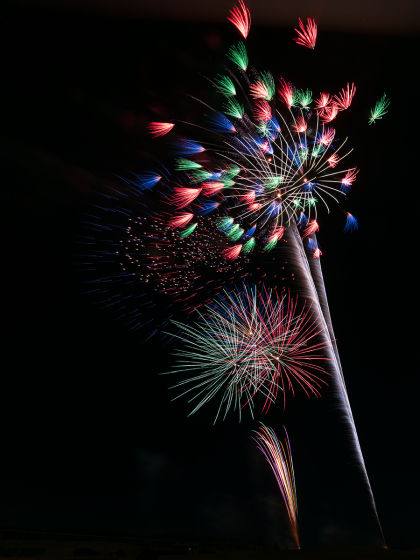 The state of the fireworks where you can see the scene of Godzilla invading from the sea to the land can be confirmed in the following movie.


As the final stage approaches, the fireworks will be wider and wider. In No. 15 “If that legendary band appears at Oga Namahage Rock Fest”, a 400m full-wide firework will be launched in line with

QUEEN 's “I Was Born To Love You”. Fireworks were set up around the venue, so it seemed that fireworks were launched from the left and right as well as from the front in the front row. No. 16 “If you can return to high school,” the finale fireworks.

The fireworks will slowly rise to match Aimyon 's Marigold. In the rust part, a straw hat appeared at the top, and a fireworks with lots of marigold flowers rose under it. The final all-out will be decided, and if it is a regular fireworks display, the announcement of the end will flow and it will be dissolved, but here the clap will start from the venue according to the voice of “Encore”. “Thank you Encore. We were able to prepare fireworks for the Encore this year,” the venue boiled as the announcement flowed. One of the features of this fireworks display is that the Angkor fireworks are launched. When the donation request and announcement of volunteers are over, the real finale “Encore Fireworks” is finally reached. A dance-arranged “until the day to meet again” flows and the fireworks go up to match the rhythm. The frog fireworks rose many times along the way

, as I said in an interview with Yoshikazu Konno of Northern Japan Fireworks Industry, 'I'm raising the frog fireworks with the wish that customers want to return safely.' 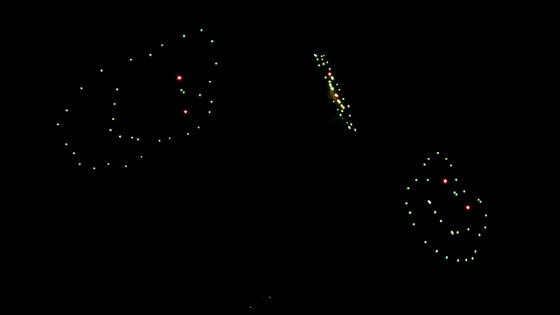 The state of the encore fireworks can be confirmed in the following movie.


After the encore fireworks are over, applause will spring up from the venue. The fireworks display has ended. At the exit of the venue, a fireworks donation was held for next year. Immediately after the tournament, when I asked Mr. Yoshikazu Konno of Kita Nihon Fireworks Industry, “Where was the program that was the most popular today?”, The answer was “all”. Because they worked hard to provide fun fireworks, all of them were fireworks with enthusiasm. In this way, Oga Nihonkai Fireworks, where you can fully enjoy the fun fireworks produced by the Northern Japan Fireworks Industry, was a unique fireworks display where you can enjoy the fun of expressing fireworks.