Successful LED light lighting with a thermoelectric generator that can be made for about 3000 yen, surprising possibility for power generation using radiant cooling 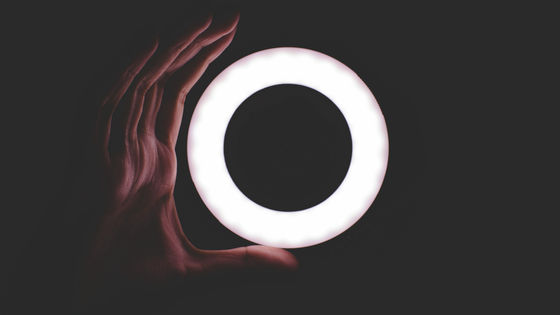 One of the weaknesses of solar power generation is that it cannot generate electricity at night, so many people in the world cannot benefit from electricity at night. To overcome this situation, researchers have found a low-cost power generation strategy that uses the “cold cold” by radiative cooling . In fact, the researchers have succeeded in turning on the LED light at night with a device that collected only about 3000 yen of commercial products. The research was done by Earthworth P. Raman at the University of California, Los Angeles, and Way Lee and Shanfi Fan at Stanford University. Mr. Raman and Mr. Fan have been jointly researching “radiant cooling” since 2012, and co-founder of “

SkyCool Systems ” which produces panels that use radiant cooling to achieve more environmentally friendly cooling and air conditioning. It is also. It seems that a low-cost thermoelectric power generation using radiant cooling was a secondary idea born from this research.

The power generator made by Mr. Raman and others is quite simple. The black disk visible in the picture is the empty one of the aluminum disks that are mounted to sandwich the thermoelectric generator module. The table on which the disk is placed is somewhat clunky, but this is a polystyrene base covered with aluminum to prevent heat radiation from other than the disk. All the materials are commercial products, and it can be managed by high school students, and it costs about $ 30 (about 3200 yen). 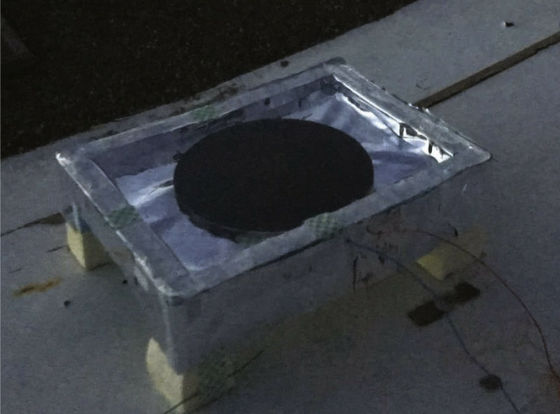 The schematic diagram looks like this. Aluminum fins, which are also used for exhaust heat from PCs and air conditioners, are attached to the ground-side disk that is placed under the thermoelectric generator module with an aluminum box in between.

The mechanism is that heat is emitted by a cold side (low temperature side) disk toward the sky, and the atmosphere is used as a heat source on the high temperature side to generate electricity at that temperature difference. Contrary to the fact that solar heat reaches the earth by radiation, the heat from the low temperature disk is diffused into the universe by radiant heat transfer.

Raman et al. Installed the device in December 2017 at a height of 1 m from the rooftop of a building in Stamford, California, and started testing at 18:00. The weather was fine and the outdoor temperature was -1 ℃ to -3 ℃. 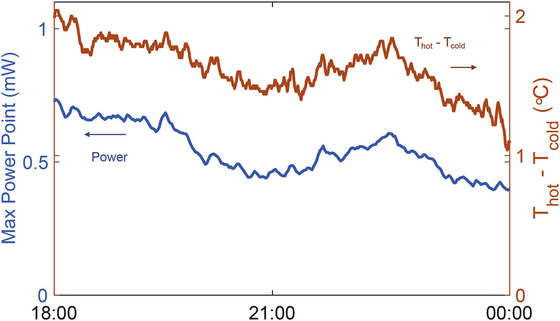 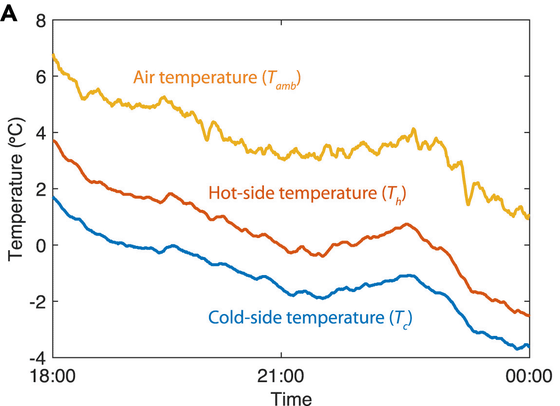 The output obtained was very small in terms of power generation capacity, but when the LED was connected across the booster, we succeeded in lighting it. It seems that the brightness was about 10% at the maximum. 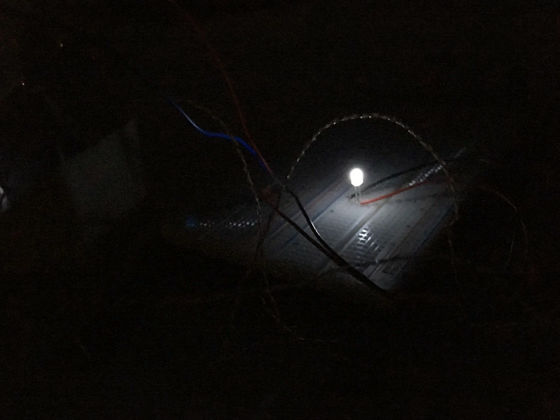 Mr. Raman et al. Was not the first attempt to generate electricity at night using thermoelectric generators, but many of the previous attempts required aggressive heat input. The point of this system is that it is completely passive, and it is thought that the output can be increased to 0.5W / m² with existing technology alone.

As mentioned above, it was born as a secondary idea of research different from the original, but `` It was possible to generate light from the darkness of the night '' means that even the coldness of outer space is thermodynamic for power generation Mr. Hwang says that it shows that it should be treated seriously as a resource.