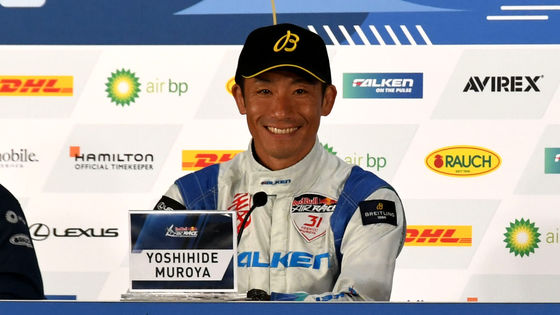 Red Bull Air Race Chiba 2019 , held September 7-8, 2019 and in Makuhari, Chiba, will be the final tournament of the Red Bull Air Race World Series that started in 2003. At the press conference held immediately after the qualifying race on the 7th, the players who won the qualifying talked about their enthusiasm for the final race, which will be the last race in the series.

Immediately before the press conference, the schedule for the 8th was changed due to the approaching typhoon No. 15, the Masters class final race of Red Bull Air Race Chiba 2019 was greatly advanced, and the challenger class final race was canceled It was announced that it became.

[Notice] September 8th (Sunday) The tournament program will adjust the time with the highest priority on safe competition in consideration of the weather.

The opening time is 9am, the master class competition starts at 10am and the closing time is 15:00. Https://T.Co/0FbgubljMV #RedBull #Airrace # Red Bull Air Race pic.twitter.com/t7kZ2yY4pN 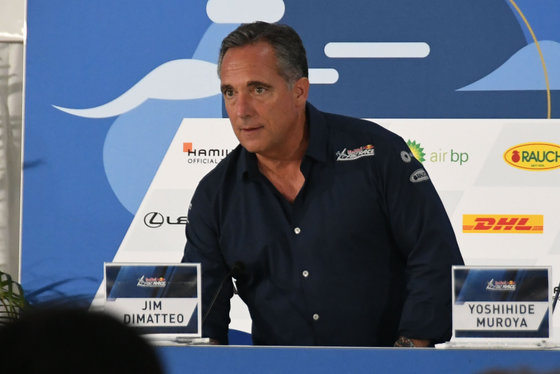 Yoshihide Muroya, who finished 5th in the Masters class qualifying at 57 seconds 570 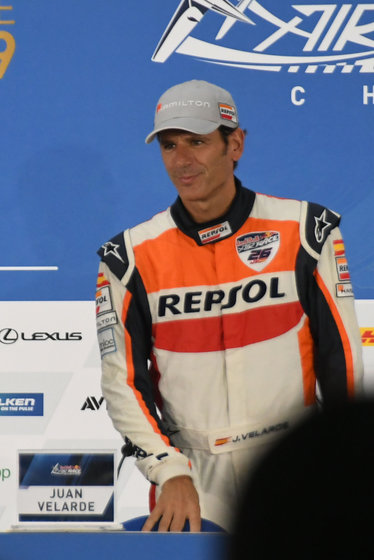 Martin Bullson of Red Bull Team Sonka, who is an annual general champion of 2018 and earned 67 points by the Chiba tournament in the 2019 series and is the first place overall, has a time of 56 seconds 879 in the masters class qualifying Recorded 2nd place. The following is the question and answer session held at the press conference.

Mr. Dimaccio:
I am very happy to have returned to Japan before answering the questions. I would like to thank all the fans and everyone involved. There were various changes, but I am grateful for all the responses. And I think Japanese fans are the best fans in the world. Races are held all over the world, but it would be a perfect scenario for Japan to be chosen as the “last race” for the Red Bull Air Race. With the typhoon approaching Japan from the south, we decided to run the final race ahead of schedule, with the highest priority given to how safe the competition can be. This is not only the safety of the pilot, but also the judgment of the best way to race, including the safety of the audience and everyone involved. It was a decision for fans to enjoy the race as much as possible.

Q. Sports events are often influenced by the weather, and in the past, the Red Bull Air Race final race was not possible. If the weather on the 8th collapses, how will the winner be decided?

Mr. Dimaccio:
Everything has been agreed as an operation manual. Therefore, it is recognized as a formal result after one race is over. The qualifying race held today will be recognized as a formal race and this will be the final result (if the 8th race is canceled). If the race opens on the 8th, the result will be recognized. Instead of just hitting it, you will be devoting points by making decisions according to the manual regardless of what happens.

Naturally, we have prepared as much as possible so that we can fly to the end on the 8th. And ultimately, the champion will be decided. Of course I would like Mr. Muroya, who is hosting my country, to do my best, and I want Berarde, who showed a great flight in the qualifying, and Sonka, who has won the overall championship, to do my best. I think it will be a great race and the champion will be decided in front of this beautiful Makuhari in front of the wonderful Japanese fans.

Q:
I have a question for Mr. Yoshihide Muroya. This is the first Japanese and Asian first annual champion, but on the 8th in Chiba, you might be aiming for the second annual general champion. Muroya is aiming to become a world champion in Chiba as a player who has given all the results in the Red Bull Air Race so far. How was your flight today? Please tell us your enthusiasm about winning.

Muroya:
(In one word) Konnichiha.

Muroya:
Thank you for coming to the race today. And I am grateful for the interest of many people in Japan. I am happy that this is the fifth time we have a Red Bull Air Race in Chiba. As I introduced, I have won twice in Chiba. And every time I got cheering from local fans, it helped me and won. Therefore, it feels good to go tomorrow. I want to do my best. Q:
Unfortunately, for today's qualifying flight, I didn't get points in the qualifying. On the 8th, you really had to do your best to fight. What do you think?

Muroya:
Yes, I regret that I did not get 3 points in the qualifying. In particular, the starting speed between gates 1 and 2 was not easily determined, and it was very difficult to pass in the best condition. And there was a tough thing where the system was very unstable at the time of the second attack, but what happened today has happened, switch the feeling and do my best towards tomorrow I think I want to do. I think there are still many opportunities for winning, so I will do my best.

Q:
The last very simple question. I would like you to answer in Japanese. Tomorrow's final will be the last match of the year and the last game of the Red Bull Air Race World Series. What do you think would be if you could win the second championship with the support of the fans?

Muroya:
It's not simple question (laughs) 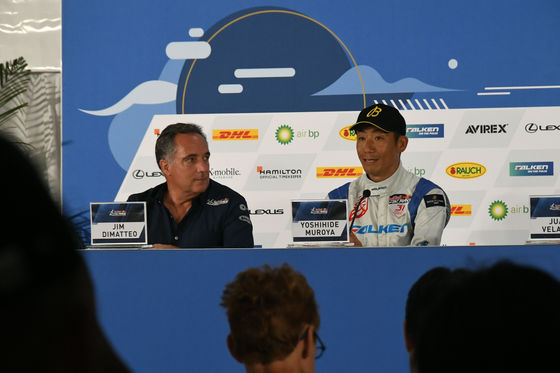 Q:
Congratulations to Juan Berarde, who took first place in the qualifying. You showed a stable flight from free practice, but how did you actually feel it?

Berarde:
Thank you very much. I am very happy to be here. I am very happy that I had the best time in the second qualifying since I participated in the Red Bull Air Race. I think this is an excellent achievement for me and my team. I was well versed in tactics and I became confident. Thanks to that, I came to Chiba and could fly without mistakes. I am grateful to the team. I think the team made a good flight. 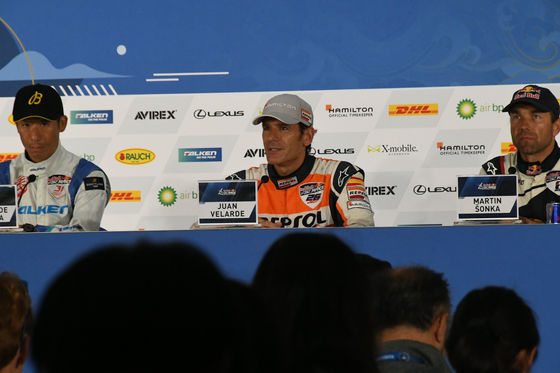 Q:
Unfortunately, regardless of the result of the final race, Berarde ’s point world champion will not reach. However, depending on the race, it is possible to drive the winning candidates Sonka and Muroya into a difficult situation. Do you want to win on the 8th or do you want to aim for the world champion?

Berarde:
The 14 players who actually participated in the qualifying have fought intensely. Every player wants to win, and I want to get a good ranking. I want to fight firmly for the championship and I want to concentrate on my race. 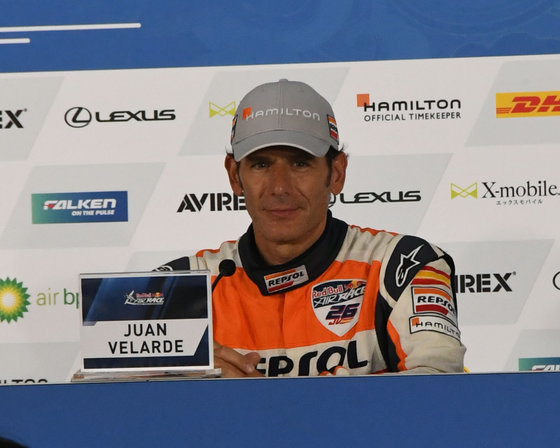 I think the final race is the last chance to win the Red Bull Air Race. I have been on the podium so far, but I have never won, so of course I will aim to win. We are racing with confidence even in the severe weather conditions.

Q:
The current world champion, Czech-born Sonka, won the trophy for the player who recorded the fastest lap in qualifying. And in the final, a bigger trophy is waiting. Are you satisfied with today's performance? Please tell us your enthusiasm for the final.

Sonka:
(In Japanese) Konnichiha (laughs) It ’s an honor for me and my team to win the fastest lap trophy. I feel that this is the result of our hard work. I think that it was a big thing that we were able to get 2 points because it was 2nd place today. However, if you win the final, you can get 25 points, so you still have no idea what will happen. I would like to concentrate and do my best as I do today. I think I was able to fly calmly today. 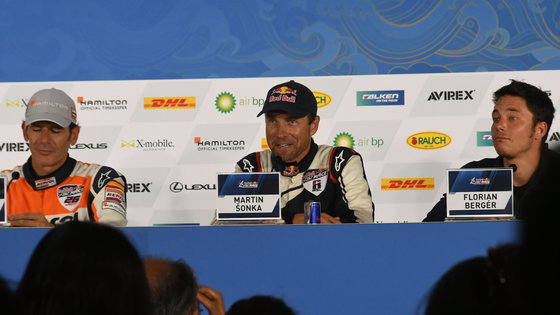 Q:
I would like to ask about the technical part of how to attack the racetrack. The course has changed slightly compared to last year. What is the point in that, and what tactics do you think will give you a fast time?

Sonka:
“The trick to fly fast” means “to be a good pilot” and “to get on a fast plane”. Makuhari's race track is a much tighter course than on paper. The wind direction changed every time, and the wind direction actually changed from the training session. As for the race track, I think that going into the approach of Gate 1 will have a major impact after that. In fact, in the qualifying, there is something that I grabbed for myself in the first attack. 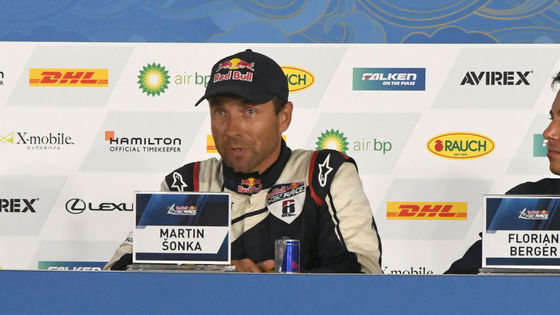 I think Makuhari is a very technical course, including a vertical

maneuver . You must fly smoothly without making mistakes and take into account the energy of the airplane. I want to win in the final in front of a great course, in front of great fans.

Q:
Unfortunately, it will be decided that the challenger class final scheduled for tomorrow will not be held, the first place in the qualifying will be the winner, and the 9th winner Burger will be the annual champion. Even though the final was cancelled, Burger showed a great flight during the qualifying. What was the reason why Burger was able to lead other players with a big difference? Q:
When Muroya won the overall championship in 2017, he told the Fukushima citizens that “the power of the citizens has become a trophy”. What kind of race would you like to show to the Fukushima fans who have been supporting you in the final race on the 8th?

Muroya:
Based on Fukushima, we have accumulated training and preparation. I think that such a system can be made with the cooperation of the citizens of the prefecture as well as our team. For tomorrow, I think it's best to put out 100% of what I have prepared, and I'd like to leave a deposit as to what will happen to the results. Actually, I can't say there is something I want to tell you, but I have made various efforts to get the best in the world, and there are also parts that I have grasped. I would like to tell you if you need such a thing and help someone else.

Q:
I would like to ask all four pilots, but I was curious that the session time on the 7th was less than 1 second compared to the free practice on the 6th. Is it wind that time did not increase? Or is it some other condition?

Muroya:
I think Berarde knows this well (laughs), so I'd like him to answer. Berarde:
I think there were various factors, but of course there were changes in the weather and wind direction. Also, in the qualifying, the air was not very dense and the engine performance was not as good as during free practice. I think that the reason why the time was not good even in the morning when the wind was not so strong was the factor.

Q:
Thank you very much.

Finally, on the platform, everyone took a group photo in smartphone selfie mode, and the press conference was over. 
This is the last Red Bull Air Race Chiba 2019 finalist with Muroya's reversal victory, the state of the final match haste repo-GIGAZINE