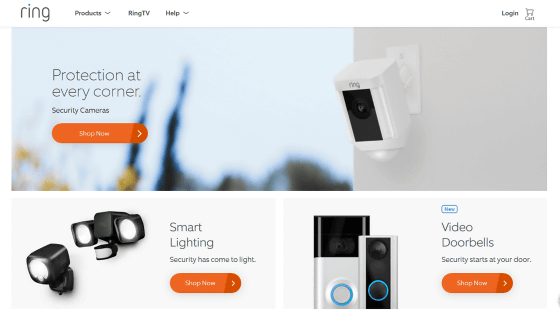 the smart doorbell “ Ring ” product acquired by Amazon in 2018, it turned out that the police were able to view the video of the terminal and information posted by the user to the community.

How to check if police are watching your neighborhood with Ring
https://mashable.com/article/amazon-ring-law-enforcement-surveillance-map/ Ring develops a variety of security products, including the “ Video Doorbell ” smart doorbell with a surveillance camera equipped with motion sensors and video streaming functions. If Video Doorbell is connected to a smartphone or tablet, you will be notified when a person stands in front of the entrance, you can check who the visitor is, and you can also call from outside.

In addition, we have started a business with the goal of `` reducing crime in the community '', providing a `` Neighbors app '' that shares information on crime and safety with neighboring Ring users, and forming a network of Ring users It is.

However, in August 2019, Gizmodo and Motherboard found that police were able to see the contents posted to `` Neighbors app '' which can only be seen by Ring users, and shooting with Ring products He was able to request access to the recorded video. Concerns about the “surveillance network” by Ring were expressed by privacy experts.

According to Motherboard, in the Ring company in 2017, a system called `` Digital Neighborhood Watch '' was discussed, and Ring users spread Ring products to other neighboring residents or provided crime-related activities to the police In addition, a plan to give a privilege to purchase Ring products at a low price was envisaged. A spokesman for Ring said the Digital Neighborhood Watch plan was discontinued in 2017 and commented that companies are constantly considering a variety of new ideas.

In partnership with law enforcement agencies, he has been thinking about managing information shared by users and protecting personal information. In addition, Ring claims that by helping local residents and law enforcement agencies work together, they have achieved remarkable results in solving incidents such as firearm theft on roads and drug theft for diabetics . “All members of the community play an important role in making neighborhoods safe, and Ring users are proud to contribute to the safety of the community,” Ring said.