Some of the traditional events held in various parts of Japan as religious events and local cultures are not easy for outsiders to see because of their intense movement and dangers such as fire festivals. There are many. One of the events that are held at stadiums and parks in consideration of safety and tourism, even though it is a dangerous traditional event, is the “ Super Great Fire ” held in Ooi Town, Oi-gun, Fukui Prefecture. I've actually seen what kind of event is Super Fire.


◆ What is super large fire (Ogase)
The source of this event is the fire festival “Great Fire Force” held in the local canopy town. This fire festival is said to have a tradition of over 300 years and is designated as an intangible folk cultural property. The large fire is dedicated to praying for fire protection and fertility. The cypress is 14m long and the cross is assembled into a leaf shape. Create a fire wall by tying a bunch of pampas grass. Then, ignite the fire pit, stand on the top of the mountain, rotate the fire pit to defeat it, wake it up and turn it. The large fire is an exciting fire festival where flames fluctuate several times. Super large fire is the development of this fire as a local event.


The state of the venue around 15 o'clock on August 3, 2019, when a super fire was held. The weather is clear and preparations for the event are progressing steadily. Around 15:45, there was a tour to see the preparations for the event. On the tour, you can also see the super large fire up close. Visitors can write a message of cheering on the stick that rotates the super fire. 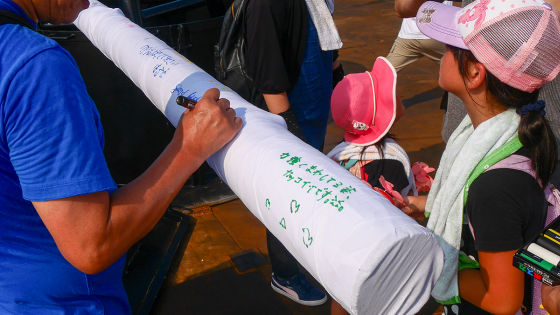 Around 16:55, it was 5 minutes before the opening of the paid seats. There are many visitors in front of the gate. It was opened at 17:00. The paid seats are divided into several areas, but you can choose seats freely in the same area, so you will hurry to get a seat that is easy to see. The seat where the super large firepower can be seen nearby was buried quickly. At 19 o'clock, a drum performance by the local creative drum team

Taihan Blaze will begin and excite the venue before the main event. The event started at 19:40. First of all, there will be a ritual where a flame of eternity is given to the torches that ignite the super large fire. 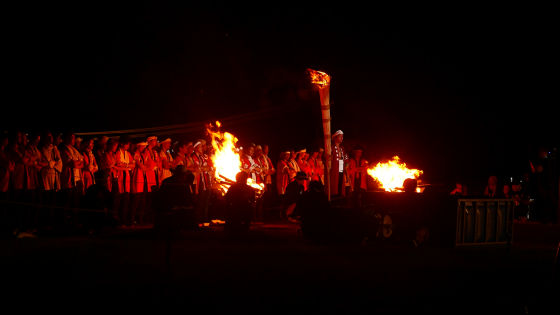 At the end of the ritual, the fire will be ignited. 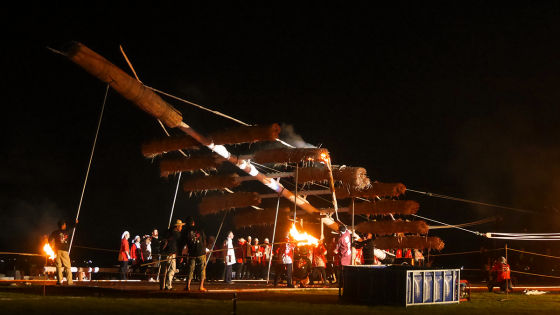 Now that the fire has been ignited to some extent, we will move on to the task of setting up this super fire. Super large fire gradually rises when a group called the youth pulls the rope prepared on the left and right. 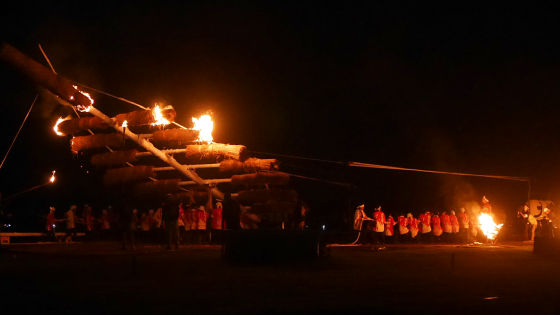 A super firepower will gradually rise with the voice of “Yasser”. Water was always poured by the water discharge so that the young people underneath would not burn. 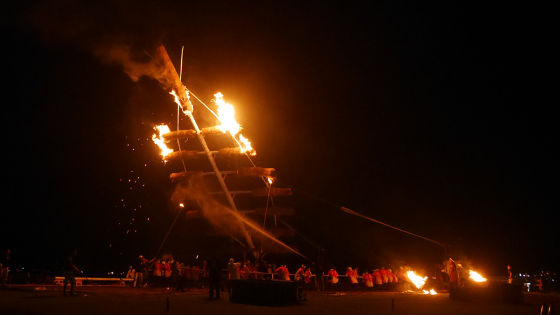 With a shout of young heads, such as “hold more firmly” and “speak more”, the super large firepower rose up safely. 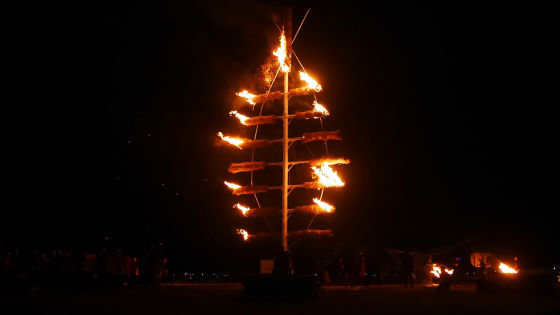 At last, the rotation of the super large fire that is the main attraction begins. 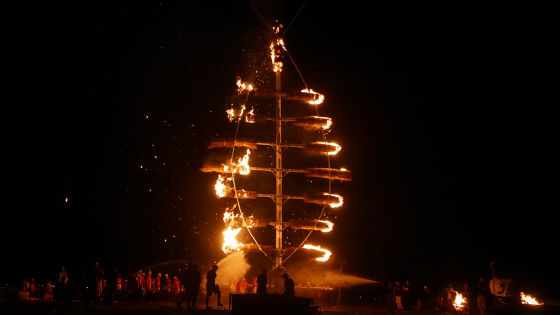 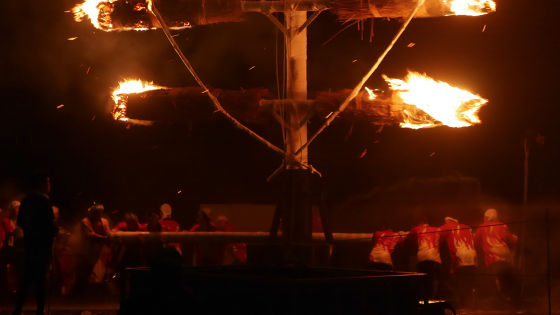 After about 3 rotations, change to another group. Water is always discharged, but the water used for this discharge is seawater assembled from the sea. 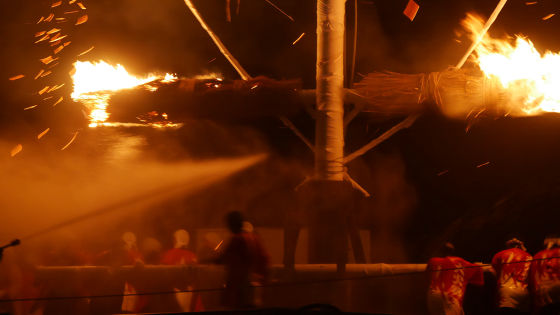 In order to burn evenly, the direction of rotation is reversed at each turn. 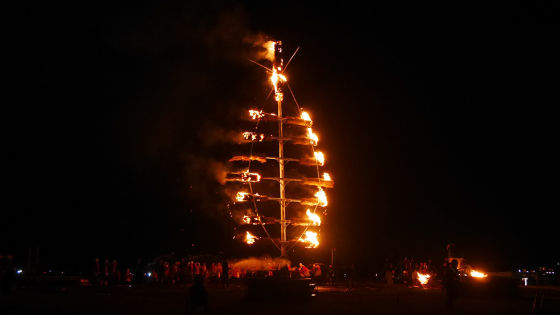 In 2019, as a new attempt, fireworks will be launched in the middle of the Super Great Fire Event. When the fireworks open about 30cm in diameter, it will be raised by a method called twin hitting two shaku balls that are 330m in diameter at the same time. In addition, this shaku-dama is known as an artistic ball, which is a highly artistic ball unique to Japan. A collaboration between a fireworks ball called 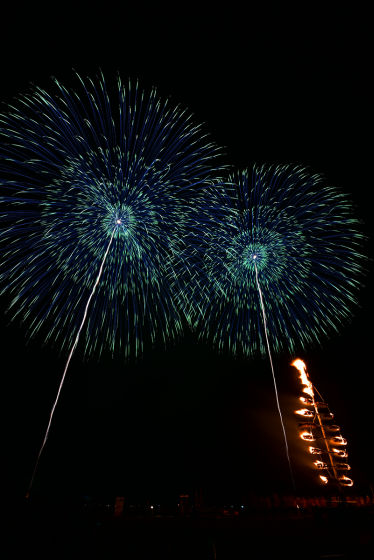 A total of 12 types of fireworks, including a super large fire that rotates with a red and white eight-core lead from Itoi Pyrotechnics, Inc. 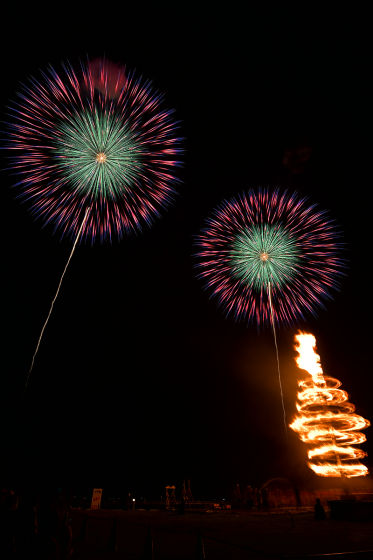 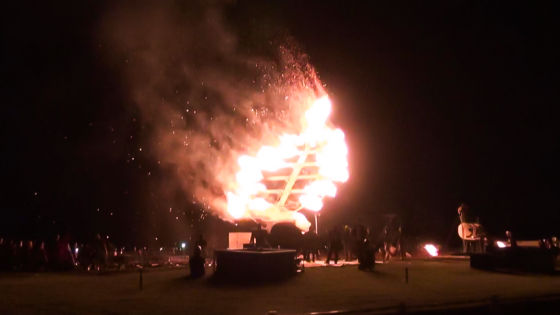 As soon as it fell down, the fireworks were ignited, and the entire venue became brighter and cheers rose. 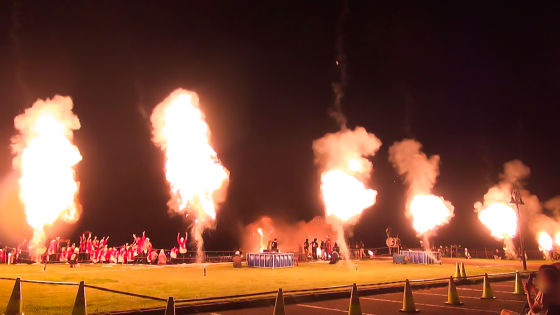 Although the main event is over, the fireworks festival titled “Fireworks and Light Pageant” will continue. Since fireworks are launched from a trolley prepared off the venue, you can enjoy the fireworks display at the Super Fireworks venue. In addition to raising fireworks vertically from a trolley, it is a firework that can be seen in a wide range by launching it in a fan shape. In the finale, the music will not be used and the venue will be livened up with only fireworks. Click here for the Finale Fireworks movie.


A large ball blooms and a series of small fireworks starts. 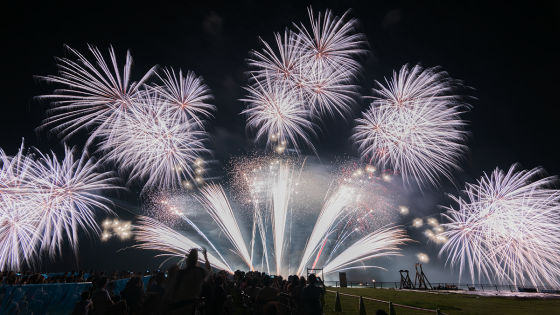 Finally, a big ball that makes you think it's the last will go up. I heard applause from the venue. When the fireworks are over, the fireworks shoot up as if they were folded together with the sound of a sound, and the whole area is dyed into the golden world. From the venue, applause and cheers burst out. At the final stage of the Super Great Fire Force, it is a classic to launch fireworks at once without using BGM and close the curtain with a dramatic and flashy production, which is one of the highlights. Super large firepower can be enjoyed as entertainment, with presentations such as commentary and background music flowing to enhance the atmosphere. The fireworks display is not like a fire festival bonus, but it is a fireworks with rich contents such as launching at once in a short time, the finale dares not to play music and enlivens the audience with the original explosion sound of fireworks and tightens the fire festival It was a production that impressed me firmly.