Why are 1200 dams removed in the United States? 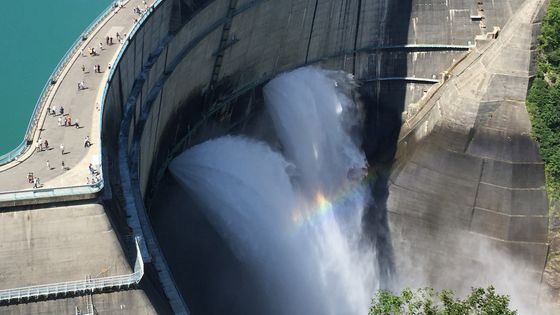 In the United States, nearly 1,200 dams, both large and small, were removed during the 20 years from 1999 to 2019. Protecting people from floods caused by increased rivers and creating clean energy that does not emit carbon dioxide or toxic substances by the hydroelectric power plant attached to the environment. There was a reason for taking care of it.

How Removing One Maine Dam 20 Years Ago Changed Everything • The Revelator
https://therevelator.org/edwards-dam-removal/

A Brief History of Edwards Dam on the Kennebec River
https://www.nrcm.org/projects/waters/edwards-dam-kennebec-restoration/a-brief-history-of-edwards-dam/

In the past, the Kennebec River, which flows into the US state of Maine, had a historic Edwards dam built in 1837, but it was removed on July 1, 1999. On the Kennebec River on the day of removal, not only locals and the governor of Maine, but also government officials such as Terry Garcia, Secretary General of the Ministry of Commerce, gathered 1,000 spectators and the work machine destroyed the dam I watched the river overflow with water. The road to the removal of Edwards Dam was never flat. In 1989, when the removal plan was raised, local company Edwards Manufacturing, the owner of the dam, was planning to expand the power generation capacity of the hydroelectric power generation facility three times. . Negotiations between Kennebec Union, formed by the river restoration movement group American Rivers and fishermen, and Edwards Manufacturing and the local rights holder, Augusta, are difficult, and it takes more than five years to reach an agreement. Needed.

There was also a strong opinion that the dam should continue because of the high cost of removal and the risk of erosion of riverbanks and increased flooding in downstream areas. Among local citizens, there were not a few people who had complicated thoughts on the dam removal plan that has been supported by local industries for 160 years and has been popular as part of the cityscape. That.

Still, the removal of Edwards Dam was made because of the strong will of river restoration activists and fishermen to restore the Kennebec River ecosystem. Before the dam was constructed, 500 salmons were harvested every season in Augusta, but in 1850 after construction, the number decreased to five, effectively destroying the fishery in Augusta. Also, downstream of the Kennebec River, sturgeon catch, which was 320,000 pounds (about 145 tons) annually, decreased to 12,000 pounds (about 5 tons) annually in 1880. California Department of Fish and Wildlife

Jeff Crane Professor of St. Martin University paper on the Edwards Dam in, 'herring- Arosa foster a myriad of fish, such as, striped bass, Atlantic salmon, sturgeon, Kennebec River, which supported the ecosystem, such as otters and bald eagles are , In exchange for the economic development of Maine, it became a factory drainage system. ' Although the water quality of the Kennebec River has been improved considerably by the water treatment facility constructed with 100 million dollars (about 10.6 billion yen), it has not yet regained its former form of ecosystem treasure.

However, this situation changed completely with the removal of the dam. Less than a year after the removal work, the sturgeon returned to the Kennebec River, and seals that had gone up the river for 40 miles (about 65 km) after herring began to be observed. Within a few years, the water quality of the Kennebec River has improved dramatically and the ecosystem, including animals such as bald eagle, otter and bear, has almost completely recovered.

It is not only fish and animals that have benefited from the rich flow. Parks and sidewalks have been developed along the Kennebec River coast, providing a place for Augusta citizens to interact and relax. “I was in my childhood on the outskirts of Augusta, but at that time the Kennebec was not a place of life or a playground. It ’s crowded with people who can have canoes and kayaks and have a good time. ”

The Kennebec River is full of leisure guests. The Edwards Dam case has become a model case for restoring the river environment, and since then there have been nearly 1,200 dams removed.

A map showing the location of dams removed in the United States between 1912 and 2018.


“We are not going to destroy dams throughout the United States. There are still more than 90,000 dams all over the United States, many of which play an important role. It ’s the fastest and most efficient way to revive, ”he said, and the view that the benefits of removing a dam are sometimes greater than the value the dam itself brings.