GitHub has released a high-speed open source algorithm ' Anime4K ' that can upconvert 1080p anime to 4K resolution. Anime4K is up to 300 times faster than

Waifu2x, which can upscale 2D images to high quality using neural networks, even though it does not use machine learning or statistical approaches, and upscales anime in real time It is possible to do.

If you enlarge an image or movie as it is, the image quality will be degraded due to noise on the screen even if the size is increased. Therefore, in order to enlarge images and movies, it is necessary to perform appropriate processing using algorithms. “Waifu2x” announced in 2015 is an algorithm that can upscale 2D images by Deep Convolutional Neural Networks. However, the machine learning-based approach had the problem that it took quite a while to upscale a 1080p movie in real time.

`` Waifu2x '' that can expand 1.6 times / 2 times with high quality by complementing artificial intelligence with 2D images for free-GIGAZINE Also, Mr. B. Penn, the developer, says that many 1080p animations on the market are not really 1080p, and there are cases where mastered at about 900p is upscaled to 1080p, so 1080p He states that even if he tries to upscale for 4K screens, the loss of image quality is inevitable.

Anime4K corrects blurring when an animation video is enlarged, and runs in the HLSL / GLSL / Java execution environment. According to Penn, Anime4K's algorithm itself is simple, and when it runs on AMD RX Vega 64, it can process in 3 milliseconds at the fastest, and even a GPU for laptops can process in just 9 milliseconds. Penn argues that using Anime4K will allow upscaling of anime even on low-spec devices such as smartphones and laptops.

Below is an example of 1080p anime upscaled to 4K (2160p), bilinear interpolation from the left, NGU (Next Generation Upscaling), Waifu2x, Anime4K upscaling. 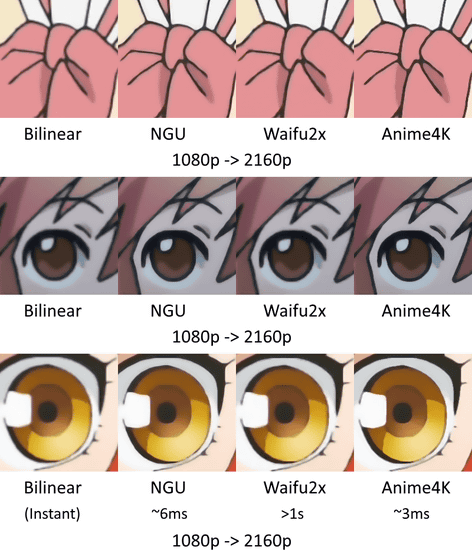 The following is a 720p animation upscaled to 1080p. Compared to the bilinear interpolation example, the main line is clearly displayed in the upscaled version of Anime4K. If you look at the following example of upscaling from 720p to 2160p, you can see clearly that the main line is processed more clearly in Anime4K and the image quality is improved. 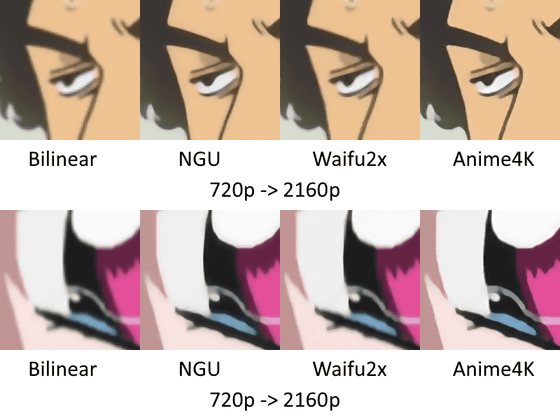 However, Penn says that when a still image with a thin main line is upscaled with Anime4K as shown in the following two-dimensional illustration, performance is not so much, and the result is almost the same as bilinear interpolation. 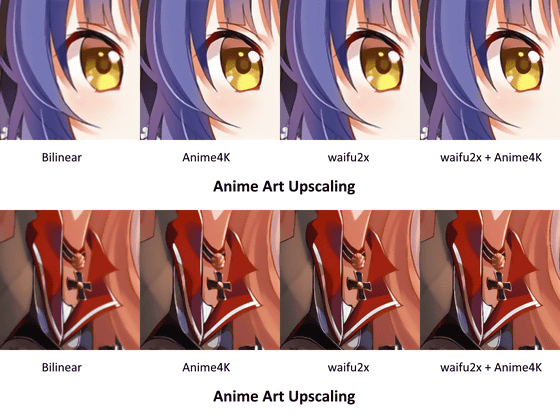 Penn claims that Anime4K is an excellent algorithm for upscaling anime in a short amount of time and with a small budget. At the time of writing the article, Anime4K is still under development and there is room for improvement. Penn said that we will continue to analyze and improve Anime4K if requested by users.