An exhibition event commemorating the 30th anniversary of “Mobile Police Patlabor” has been held at the Asia Pacific Trade Center (ATC) in Osaka from August 7, 2019 (Wednesday). On August 11th (Sunday), the middle day of the three consecutive holidays, he played

Ryusuke Obayashi who was the captain of the Special Car 2 Section 2nd platoon in the works and Shiba Shigeo, the Special Vehicle 2 Section Maintenance Team Chief A talk event was held with Shigeru Chiba as a guest.

The event will be moderated by Hideki Kawabata, who is also a revolver canon of 1/1. The venue was packed with about 200 people, including those from far away from Taiwan. 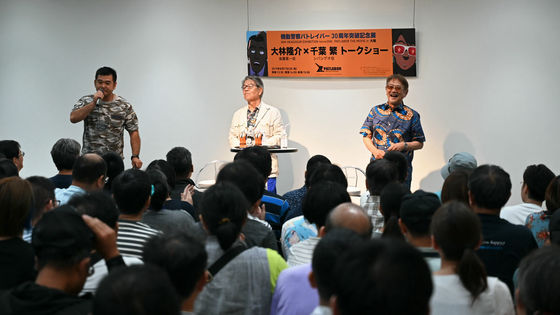 There was no audition for both Kiichi Goto and Shiba Shigeo, and in the case of Chiba, he went to the recording studio and got a script and learned that it was the role of 'Shiba Shigeo' in the work 'Mobile Police Patlabor'. I was surprised when I saw the preview at 'This is me!'

On the other hand, Mr. Obayashi was not the office that actively took on the work of anime at that time, but one day he was told that Captain Goto was informed that “The Captain of Robots is coming”. Mr. Obayashi, who was thinking that “it will be a good voice with a crisp person” from the preconception, because it is “the captain of the robot thing”, but when looking at the picture, “the eye where the frog is dead” It seems that he has been asked 'What to do' in the role of the man who did it. Captain Goto, played by Mr. Obayashi, is a character that does not push out emotions strongly and speaks indifferently. Mr. Chiba, who was “noisy enough to break the blood vessels,” said that he envied Mr. Obayashi, “This difference in energy, which uses almost no vocal cords!”. In the episode about dubbing, Mr. Obayashi said that he had a hard time because it was what he played once during the re-recording in the sound remix of `` Mobile Police Patlabor 2 the Movie '', but the line did not match the picture at all He revealed it. On the other hand, in the 12th episode of the new OVA series “Two Karuizawa”, it seems that the lines were recorded first in Presco, not in post-recording.

Mr. Chiba also talked about the live-action version “THE NEXT GENERATION Patlabor” that was developed from 2014 to 2015. Captain Goto does not appear in this work, but Shiba Shigeo is active as the second generation team leader of the maintenance team. The role was also played by Chiba himself, following the anime version, and was described as “Takeshi Oshii and the people are amazing”.

In response to this topic, Chiba-san, who asked the question “What kind of person is Mr. Oshii?” Replied, “I have been dating for nearly 40 years, but I still do n’t know.” Director Oshii suddenly said, “I'm thinking about something interesting, but what about it?” And responded, “If the schedule fits, it ’s OK,” and then there was an official offer from the production company, and there is a case that I work. On the other hand, I don't go out to drink or go out for meals outside of work, so when I finish my work, I sometimes don't meet for about 10 years. 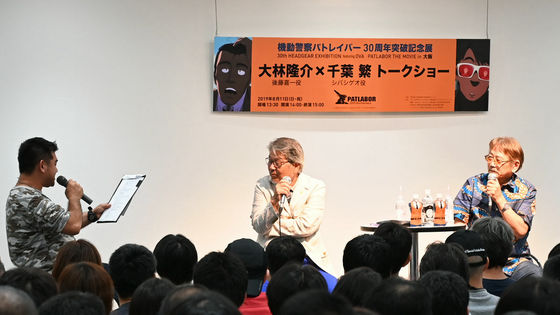 On the other hand, Mr. Obayashi, who was asked the same question, answered 'I don't know at all!' It wasn't that I didn't get along, but it was that I greeted and chatted, and sometimes I went to a talk event together, but I didn't know it.

At the end of the event, there was a “corner-speaking corner” where Mr. Obayashi tweeted “Shinobusaan…” or “So, let's be happy together”, Chiba I got a lot of excitement from screaming.

This is the last T-shirt presented at the Janken Tournament 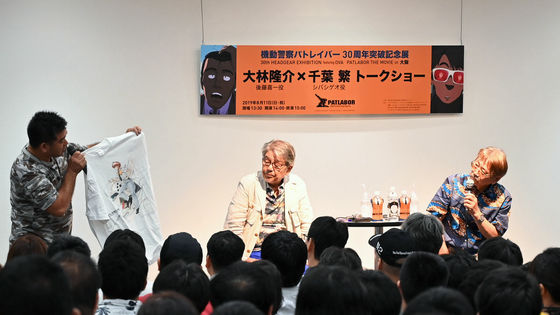 Mr. Obayashi was strong in janken and brought down many people with a single blow in the first match. 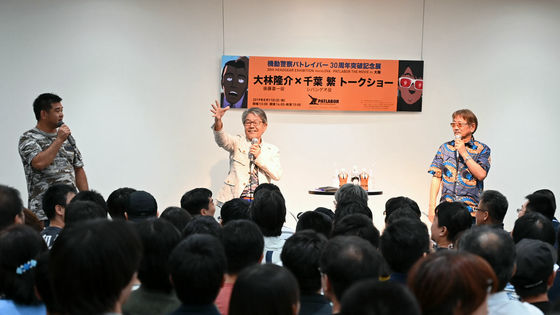 Patlabor, who broke through the 30th anniversary, is still working on a new project “PATLABOR EZY” in progress. Please take a look at the original drawings and various exhibits of past works at the commemorative exhibition.

A large main visual just after entering the ATC from the Trade Center Mae Station. There was a waiting line in front of the Umière Cube. Tickets used the main visual from the previous day until the 12th, and from 13th the ticket has been switched to Yukio Tachida's illustration.

Mobile Police Patlabor 30th Anniversary Commemorative Exhibition in Osaka, Thank you for visiting more than 400 customers in the hot weather today!
From 8/13 tomorrow, the ticket will be replaced with an illustration by Yukio Tachibana.
We look forward to seeing you tomorrow!

Shooting of original pictures at the venue is prohibited, but there are some shooting OK items. This is a cake and AV-98 Ingram to celebrate Patlabor's Day (August 10). 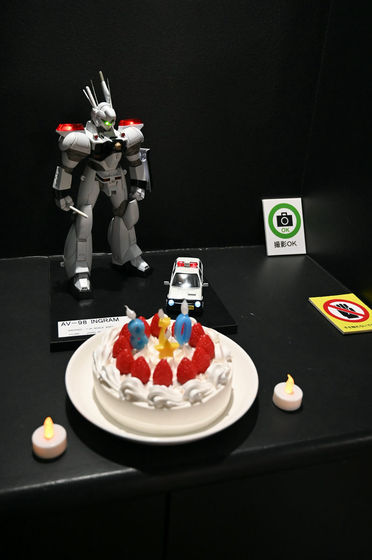 'Ark' diorama that appeared in the first movie version Also in the first movie version, Ingram vs Zero at Ark. Nomura's uniforms and headgears that vary slightly from work to work The key to Hotel Cinderella's Room 202 appeared in one episode of OVA 'Two Karuizawa'. 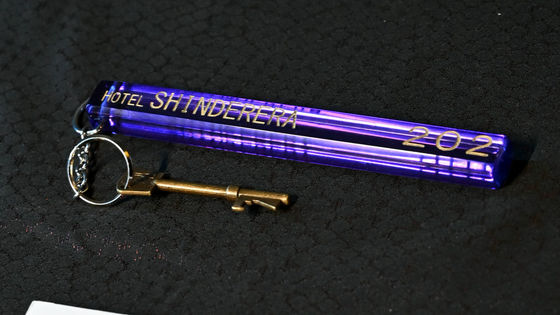 A crow with the tag '666' on its foot. This is also from the first movie version. The huge revolver cannon is 1/1 size. The cockpit was also reproduced. That's why I move that giant. “30th HEADGEAR EXHIBITION featuring OVA -PATLABOR THE MOVIE in Osaka” will be held until August 19, 2019 (Monday).