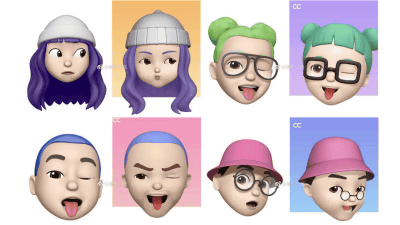 Chinese smartphone maker Xiaomi has redesigned 'Mmoji' that can reproduce user's expression with avatar as a function for in-house smartphone. However, it has been discussed that this new Mimoji is a plagiarism of Apple's '

Memoji '. On the other hand, Xiaomi indicates the possibility of legal action, 'I think about the next stage of action for those who disseminate inaccurate information.'

China's smartphone maker 'Xiaomi' has announced that the new terminal 'Xiaomi Mi CC9' has been announced, but along with this, it has been found that the emoticon of 'Xiaomi' 'Mimoji' is also renewed. The new Mimoji is pointed out by bloggers as 'the plagiar of Apple's Memoji.'

Apple introduced the Ani character as a moving stamp feature for iPhone X in September 2017. This is to move the animation of animals such as pigs, foxes, rabbits, and pandas in accordance with their own expressions in AR, and in June 2018, it is possible to reflect the expressions in real-time on their own avatars that are ani characters. 'Memoji (Me character)' has been added. Xiaomi's Mimoji is a hot topic of this Memoji pakuri.

The original name of Xiaomi's Mimoji when it was released in China in May 2018 was 'Mi Meng', but the English version was translated as 'Mimoji'. The original Mimoji did not include human avatars, and mascots such as pigs, foxes, pandas, and rabbits looked like 'the second deceased of Apple's ani character'.

The new Mimoji, which has appeared in line with the Xiaomi Mi CC9, has a humanoid avatar that can be customized to match the user's face, hair style, clothes, etc. The Chinese writer says, 'Xiaomi Mimoji is a clone of Apple's Memoji's Memoji it 'and

pointed out . The following avatars are from Apple's Memoji on the left and from Miomi on Xiaomi's right. In response, Xiaomi issued a statement, 'We did an internal investigation but found no evidence that Mimoji was stolen from Apple and other competitors.'

Reason you should hire bilingual journalists: Xiaomi put out a ludicrous press statement a few days ago to 'refute' the claims that they ripped off Apple's Memoji with their 'Mimoji' feature. ???? ‍♂️

In addition, Xu Jieyun, a spokesman for Xiaomi, argues that 'the functional logic of the two products is largely different,' and 'we also consider the next stage action for those who disseminate inaccurate information,' Weibo Said. This 'next stage' is considered to mean legal action. According to Jieyun, Xiaomi's first release of Mimoji was in May 2018, which is described in the APK package. Apple stressed that it did not appear after Memoji, as it was June 5, 2018 that changed the name of the feature to Memoji. It also refers to the fact that Memoji's word source is 'emoji' (pictogram), while Mimoji is 'Xiaomi's letter'.