What is the secret of a giant panda that can make bamboo a 'nutritive diet' instead of meat? 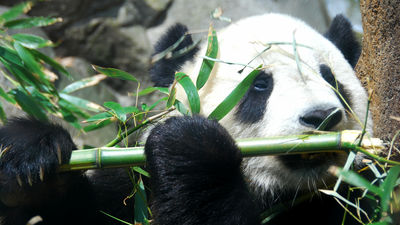 The adorable black and white giant pandas are known to eat bamboo as a staple food, despite being originally a carnivore. According to a paper published by a Chinese researcher, giant pandas have not evolved into herbivores, and it is necessary to eat bamboo while being a carnivore so that vegetarians can supplement proteins with soy and tofu. It turned out that he was able to get enough nutrition.

Unlike animal cells, plant cells have cell walls and plant fibers. The cell walls and plant fiber cellulose but is the main component, most of the animals, including the herbivores will not be able to make an enzyme that can degrade cellulose in the body. Herbivorous animals have the microorganisms in the intestines break down cellulose and absorb energy, which is the product of their decomposition products. Herbivorous animals inevitably have a long intestine, as the decomposition of cellulose by microorganisms takes a long time. However, according to Ueno Zoo, where the first giant pandas were raised in Japan, the length of the giant panda's intestine is about four times the height. Given that there are 20-25 times more herbivores such as cows and sheep, the giant panda's gut is quite short. In addition, in addition to bamboo leaves in the wild, there are also records that small animals such as reptiles were caught and eaten.

And according to a paper published by Satoshi et al.'S research team in May 2019, the jaws and teeth of the giant panda evolved, and the bones of the wrist were stretched to acquire the 'pseudothumb' by grabbing a bamboo. It is to eat. It also proved that they have lost the ability to sense umami to feel the flavor of the meat. However, at the same time, it was also found that high concentrations of protein were detected from the milk and feces of giant pandas. Usually, herbivores that do not eat meat consume at most 20% of the protein they eat. However, the nutritional composition of the giant panda was about 50% protein, and it was close to carnivores such as cats (about 52%) and wolves (about 54%). Also, the gut and intestinal flora (yes) are close to those of carnivores, and giant pandas are almost carnivores biologically, even though they eat bamboo.

Therefore, when we installed a monitoring pheromized collar on a giant panda in a national nature reserve in China, the giant panda actively eats bamboo shoots and bamboo shoots during summer as well as bamboo leaves and trunks. I understood that it was. Especially since 32% of bamboo shoots are made of protein, they are valuable protein sources for giant pandas. Until now, 'how the giant pandas rapidly evolved from carnivore to herbivore' was enigmatic, but from the research results the research team said 'in fact the evolution of the giant pandas is limited to the surface part. 'We have adapted to bamboo diet while being a carnivore with only minor changes in the way the main nutrients are taken in.' “Giant pandas are doing the same thing as human vegetarians,” says Sylvia Pineda Munot, a biologist at Georgia Institute of Technology . You can not live by eating vegetables, you need to eat beans, tofu, nuts, etc. From the rough nutritional composition, vegetarians, non-vegetarians, and giant pandas are also eating. Doesn't change so much. '