Why was the boy who got a 25 cm knife stuck in his face was safe? 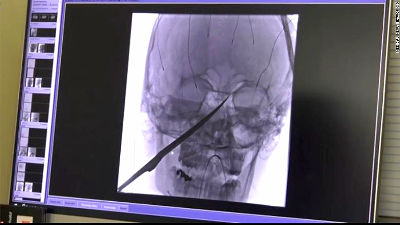 I accidentally stab a 10-inch knife into my face, penetrate the skull and reach the blade just below the brain, but without losing sight or bleeding too much, only 10 seconds The topic is the 'miracle' of a boy who was discharged within 24 hours after the treatment.

Teen survives 10-inch knife lodged in his face: 'It could have been the end of me'-CNN 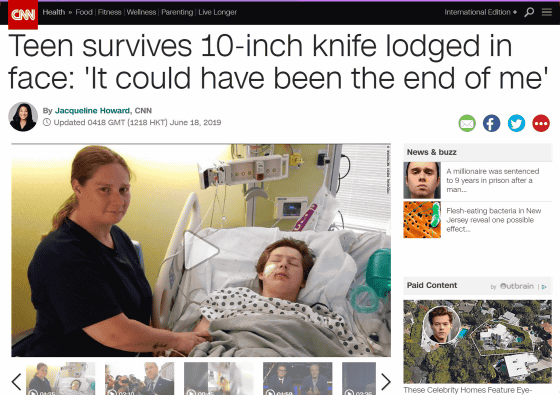 On Thursday, June 13, 2019, a 15-year-old boy, Eri Greg, who lives in Kansas, USA, was playing with his close friend with his brother outside the house and found a 25-cm knife. Dr. Kage Eversol explained that Greg was trying to move the knife out of the reach of the younger children, and the knife slipped off his hand, once in the hand of another boy. The knife stuck in Greg's face. Greg says, 'It was an instant event,' about the situation when the incident happened.

Greg's boy is in the picture. After that, the mother who heard the cry of Greg boy found that Greg boy with a knife stuck in his face, and he rushed to contact the emergency call number.

According to the doctor, a knife from the cheek pierced the skull, reaching just below the brain and pushing the carotid artery, but did not inflict any further damage on Greg Boy. 'It's a miracle,' said Dr. Greg, who is a boy with no evidence of damage to the optic nerve, bleeding or strokes. 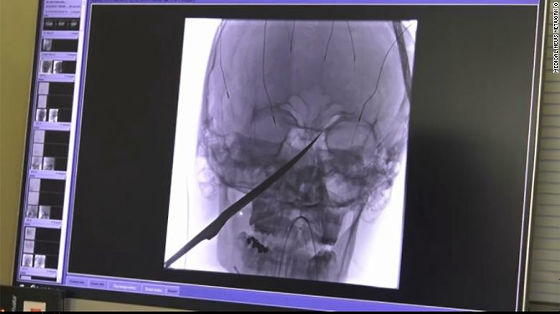 Doctors who understood the condition of Greg boy by the scan image removed the knife using a catheter and a medical balloon etc. while carefully checking the condition of blood vessels around the knife on the following 14th. The work itself seems to have finished in about 10 seconds. Greg's boy returned to his home within 24 hours after the treatment and was only instructed to 'check the condition with MRI scan after several days of rest.'

In addition, when Mr. Gregg was taken to the hospital, Dr. Eversol seemed to think 'Meta'. The reason is that in 2018 a boy with a barbeque grilled on a skull was taken to The University of Kansas Hospital where Dr. Eversol works. A 10-year-old boy named Chabiel Cunningham, who was carried at that time, was attacked by a bee while climbing on a ladder, and when it fell, he was said to have landed on a grilled meat skewer. Because the treatment for the boy Javier was safe and the prognosis was good, it was also described as 'miracle' at this time. According to Dr. Eversol, the experience of treating Xavier Boy has been used to great effect in the treatment of Greg Boy.