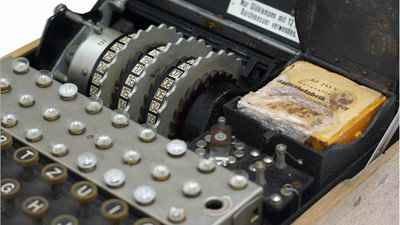 Enigma ' operated by Nazi Germany during World War II is exhibited at the Nate D. Sanders Auction , an internet auction site. Although there are some parts missing and stains depending on the number of items that are not 'final goods', it is extremely rare for Enigma in a very good condition to be called a beauty product to be marketed, and this historically very The first price of a high value item is priced at $ 200,000. Such a feeling when you open the wooden box. Although there is a slight rust on the surface, there is almost no noticeable damage such as missing parts. On the keyboard there is a 26-character bulb used for encryption / decryption, and only one is lost. The battery attached to the upper left of the main body remains as it was, and it seems that it has been corroded over 70 years. I attached three rotors to the body. The rotor is a rotating board that converts the characters you typed into other characters, and I used it by selecting and installing 3 cards out of several. When I entered a message on the keyboard, each time I entered a letter, the rotor rotated and I was able to create a highly difficult-to-decipher code. The rotor was engraved with an eagle, the national emblem of Nazi Germany. In addition, it is said that the serial number stamped on the rotor matches the one of the main unit. The leather strap that should originally be attached to the wooden box seems to be lost, but the back of the lid of the wooden box also comes with a manual that describes how to use Enigma, so it is quite a good product. You Enigma is a cryptographic machine known to have been used by Nazi Germany during World War II. After the end of World War II, the Allied forces ordered to destroy all remaining Enigma, so the estimated Enigma is very rare, estimated at around 250 cars. Enigma exhibited at the Nate D. Sanders Auction is believed to be one of the things that had been washed away by collectors after the war.