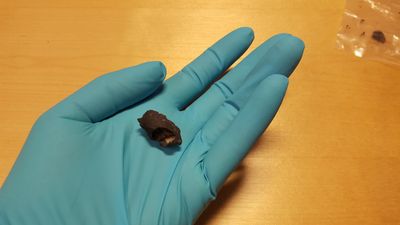 In the western part of the Scandinavian peninsula, there are ancient Scandinavian relics, believed to be more than 10,000 years old. There were excavated lumps that appeared to be resin with tooth shape, along with bones, mummified tissue, hair, etc., but because they were too fragile and fragile, it has not been possible to analyze in detail so far did. In addition to being successful in extracting human DNA from modern chewing gum by modern technology, it is said that there were also new discoveries from the aspect of cultural exchange.

The successful extraction of human DNA from the tooth-shaped ancient resin is the research group of Natalya Kashba et al. Who study archeology at Uppsala University in Sweden. Kashba et al., While excavated from Huseby Klev in western Sweden in the 1990s, focused on clumps of resin that were stored too carefully and could not be investigated. A sample was taken from the human tooth profile attached to the resin, and the DNA of two women and one man was successfully extracted from the resin at three points.

The following image is a photograph of the resin actually collected and the tooth profile collected from the left and right of the resin. The left side is the upper jaw, the right side is the lower jaw, and it can be understood from the wear of the teeth that it is the shape of the early 10's teeth. The resin was collected from the hides of the birch trees that inhabited the Scandinavian Peninsula more than 10,000 years ago, and at that time the Scandinavian people used it as an 'adhesive'. I used to brush and soften with teeth, combine bones and stones to make tools, and repair broken pottery. Discovery is not the only one. The technique called 'pressure blade technology' was used for stone tools excavated simultaneously with resin. This is a technology that squeezes the stone with a wooden stick or animal bone, takes out a thin section, and processes it as a knife.

The following movie is not the same condition as in ancient times, but you can see how it actually weighs a stone and picks up sharp fragments.


This technology is the technology brought about by EHG that migrated from Russia to the Scandinavian Peninsula, but the DNA collected from the above-mentioned resin had a strong genetic impact on WHG coming from western Europe. In other words, when WHG and EHG meet up on the Scandinavian peninsula from North and West of Europe respectively, it is now found that cultural exchange has been actively conducted from the stage where mixed race has hardly progressed .

In addition, it is understood that the creation of tools used for hunting etc. was exclusively the role of a child because the tooth shape left in the resin was that of a milk tooth. Furthermore, it was also revealed that ancient Scandinavian people did not at least share the roles of men and women in tool making, because both men and women DNA were extracted by genome analysis.

The research team stated that the discovery was “worthy in that it was able to obtain DNA information from a human being and not a human body or bone,” and in the future from traces of saliva etc. He indicated that it was hoped that various discoveries would be brought about.