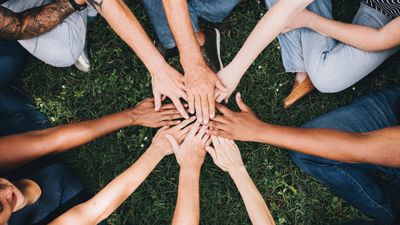 You can think of everything in the world as being connected by a “network”, and by using a system that spreads things on a network, the spread of infectious diseases and wildfires, the spread of culture and fashion, the spread of knowledge You can think about etc. Software engineer and writer Kevin Simler explains how diffusion takes place on the network using different models and discusses the impact of human-human networks on cultural trends and technological innovation.

When considering a network in a simplified way, the basic point is the ' node ' on the network and the ' edge ' connecting the nodes. If you want to create a model that spreads something, label a particular node as an 'active node' and consider the situation where the active state spreads and spreads from the active node to the adjacent node. 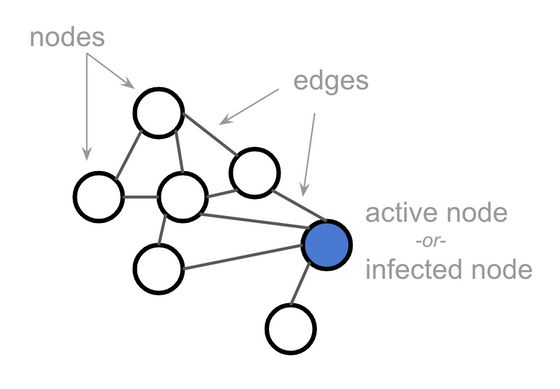 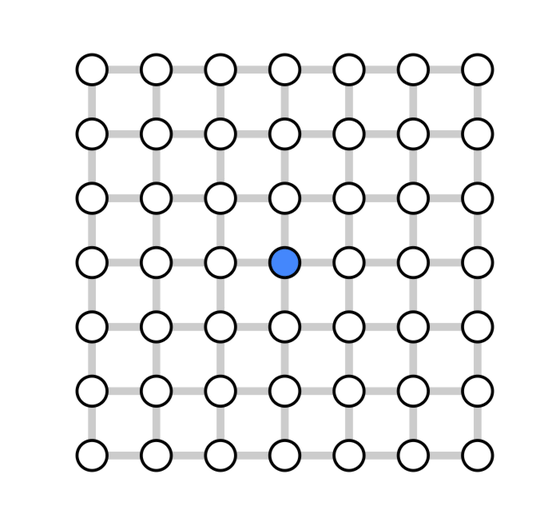 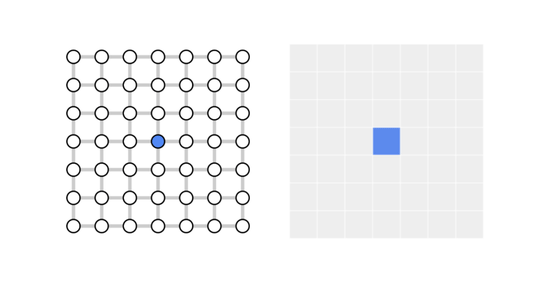 In order to better understand the spread on the network, Simler has prepared an interactive model. In this model where the blue tile in the middle represents the 'active tile' and the white tile represents the 'non-active tile', clicking on the start icon at the bottom to start the simulation ... 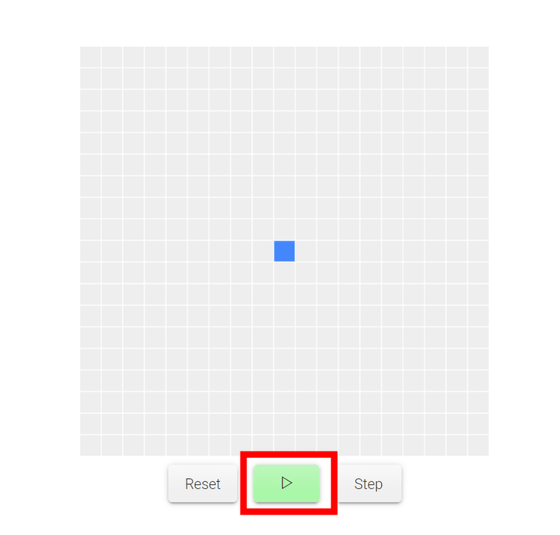 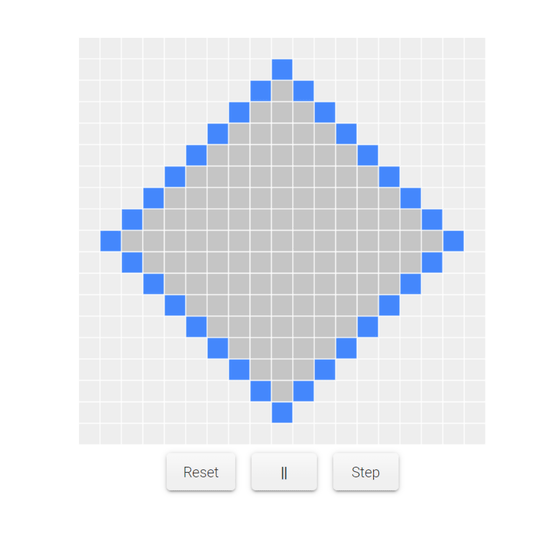 So Simler created a model that allows you to set the 'probability of the active tile spreading things to the next tile'. When you click the icon with the default spread probability '50%' ... 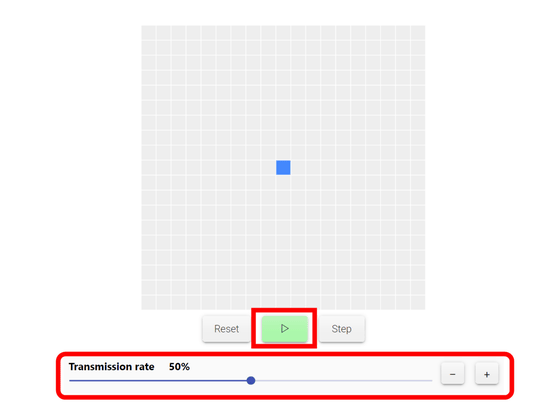 You can see how the blue tiles gradually spread. In this model, once activated, tiles are inactive and removed from the model. 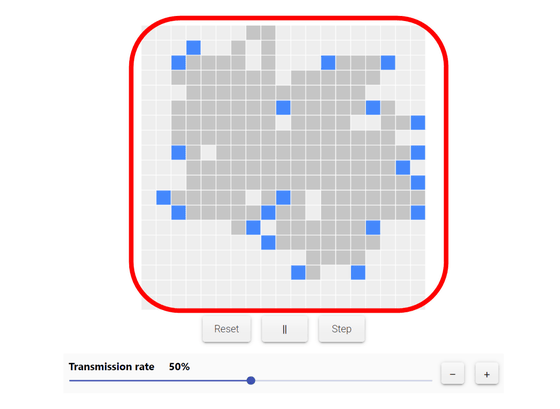 White tiles represent “Susceptible”, blue tiles “Infected”, gray tiles “Removed”, and this type of model is a SIR model It is called that. White tiles can be infected by blue tiles, blue tiles work on the surrounding four tiles, and tiles that have finished working become gray tiles that are virtually removed from the model.

The SIR model is useful for

measles epidemics, forest fires, and other phenomena where people and things that are once infected are not affected a second time. However, when thinking about the spread of culture, fashion, etc., there is a possibility that people who have been affected and then left can adopt culture again. In this case, the gray Removed tile does not exist, and it returns to the white tile again, so the SIS model in which R is replaced with S in the SIR model is valid. In the case of the SIS model, the probability of infection includes not only the spread to the surroundings but also the probability that 'the self continues to be infected', so that the four nodes that are substantially the four surrounding + the self There is a probability of becoming infected.

If you start the simulation with SIS model with diffusion probability '35%' ... 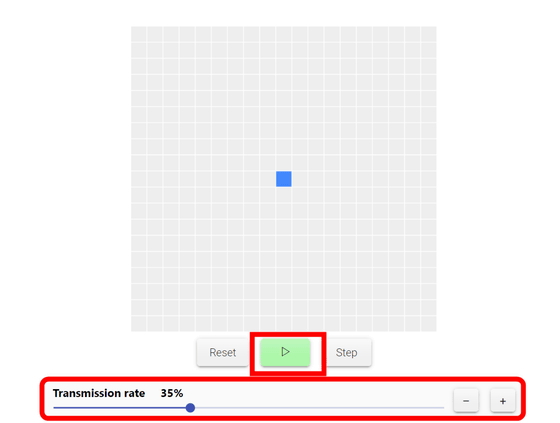 The blue tiles spread over time and you can see that the tiles are infected extensively on the network. 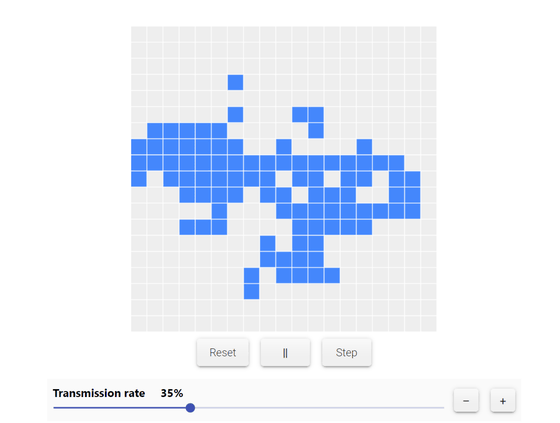 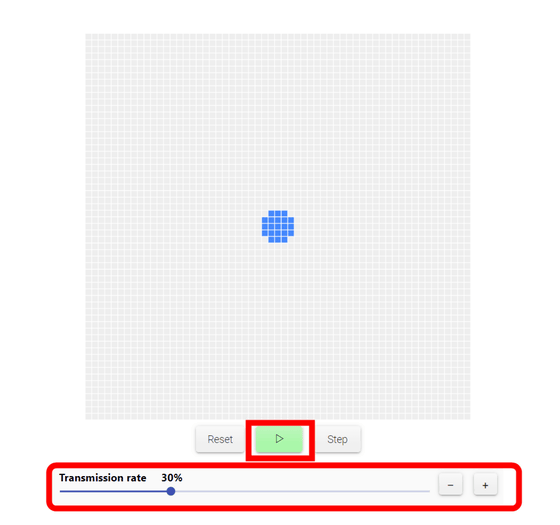 Gradually the infection spread and spread throughout. In the SIS model with four nodes adjacent, the 30% probability of infection is a supercritical network. However, if you simulate with 20% infection probability ... 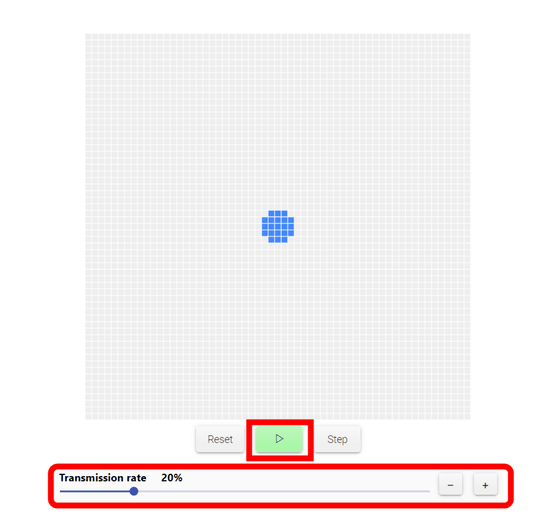 The infection only spreads locally and has ended eventually. An infection probability of 20% can be said to be a subcritical network. 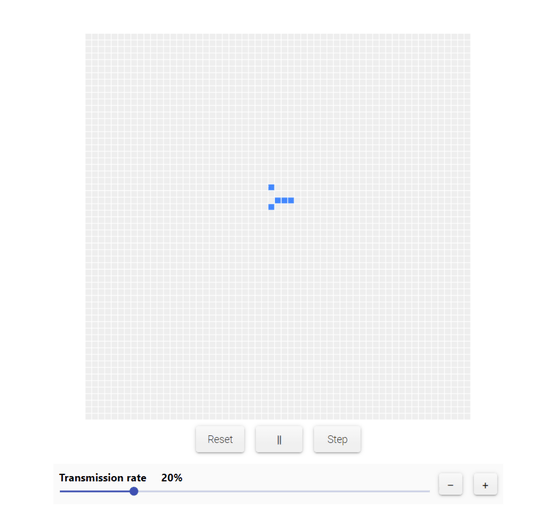 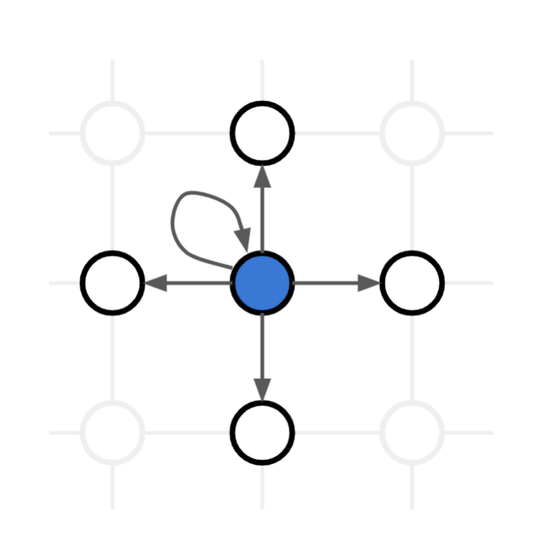 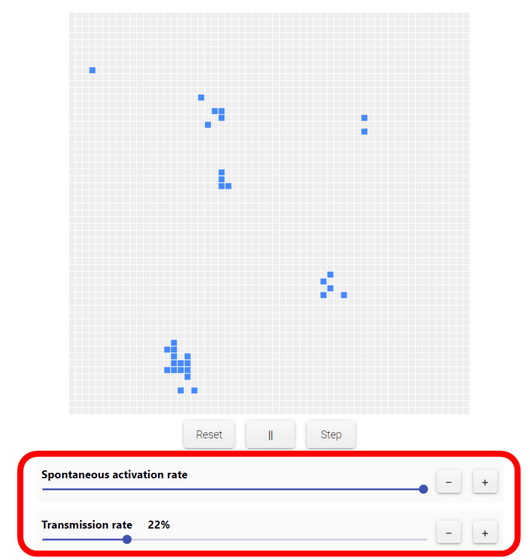 However, the most interesting point in the SISa model is that the infection does not dominate the network no matter how high the probability of occurrence is. In order for the infection to spread throughout, the probability of infection must still exceed 23%, which is a supercritical network. Simler claims that this situation is similar to 'trying to fire in a damp field', and in a very high probability of infection (a dry field) the fire will spread in a single trial, but If you try to set the fire many times in the damp field, the fire will not spread after all.

Simler points out that events similar to the SISa model occur in things like ideas and inventions. Even if good ideas and inventions are made, they will not expand as a whole unless the network has a base to extend them, and will eventually disappear. The phenomenon that has been repeated historically, even if a groundbreaking invention is made is not widespread and becomes a lost technology, and the same invention is made several hundred years later, the condition of the network is the cause Simler Says.

Simler also built a model that could set up 'immunity to infection'. If you use the slider to simulate the percentage of 'immunity nodes', you can see that the probability of infection reaching the supercritical network increases as the number of immunocarriers increases. The more immune the more nodes are, the harder it is to spread the infection, which will affect the spread of the infection on the network. Simler points out that this consideration of immunity may help to prevent the spread of wildfires. Although strict fire management can not completely prevent the occurrence of fires, it is possible to minimize expansion by making fire zones. In addition, in the case of vaccination for infectious diseases, the more people who receive vaccination, the less the spread of infectious diseases in society. Node expansion represents an increase in network density. Simler believes that by expanding the number of adjacent nodes on the part of the network used for the model, it can simulate the spread of infection in urban areas where there is a lot of human contact, and the model is actually being created. In the model below, 'the urban area' is formed in two places, upper right and lower left, and in the urban area, the number of adjacent nodes increases to 5, 6, 7, 8 as going from the periphery to the center. By simulating with this model, it became clear that the infection spreads rapidly in the urban area, and eventually it spreads around the urban area. Furthermore, there is a difference in the network density between students who interact with a large number of friends every day, even in the same urban area as in urban and rural areas, and their parents. Also, in general, the network density will be high for people located in the 'elite', so there may be a 'trend that is only flowing to the elite' that is not maintained by other networks. 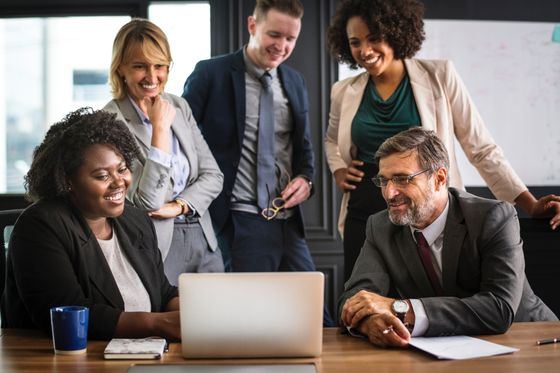 In addition to culture, Simler pointed out that network density is important for expanding 'knowledge.' When someone makes a groundbreaking invention, it is necessary to incorporate new information from the outside, accumulate what is known from existing research, and then lead a good idea. In addition, inventions that disappear silently without being known to the outside have little influence on society, and a network is also necessary to spread inventions.

For the model in invention, Simler has created a simple diagram of four experts. In the figure, 'Expert 1' invents the underlying idea, and it adds new knowledge and ideas from 'Expert 2' to 'Expert 3' and spreads, and finally 'Expert 4' completes the invention It is a scheme to make it 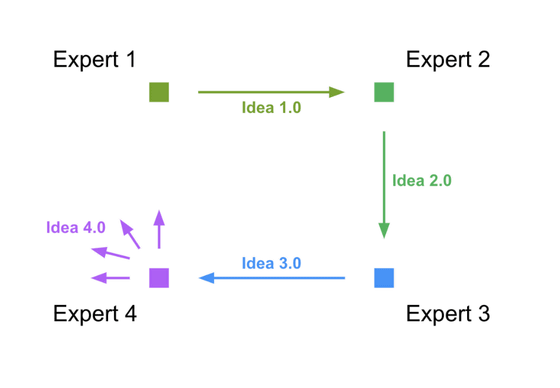 I feel like this when I drop it into the SISa model. When you start simulation ... 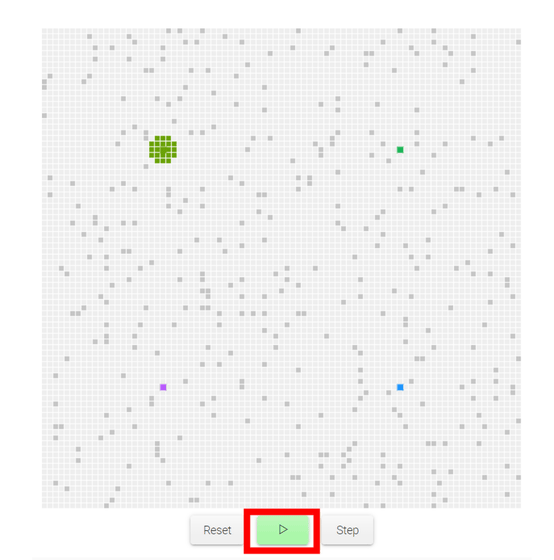 The base idea spreads out from the upper left Expert1, and the upper right Expert2 inherits it and spreads the new idea. Eventually, the idea of Expert 2 is transmitted to Expert 3 at the bottom right, and further improvements are made ... The following model is presented by Simler as 'a simpler model to speed up the invention'. There are four experts in a very close place, and in this situation we can see that the invention is created in an instant. Close to this model are existences such as 'university' and 'academy', and experts with the necessary knowledge to create inventions are located in close proximity and form a close network. 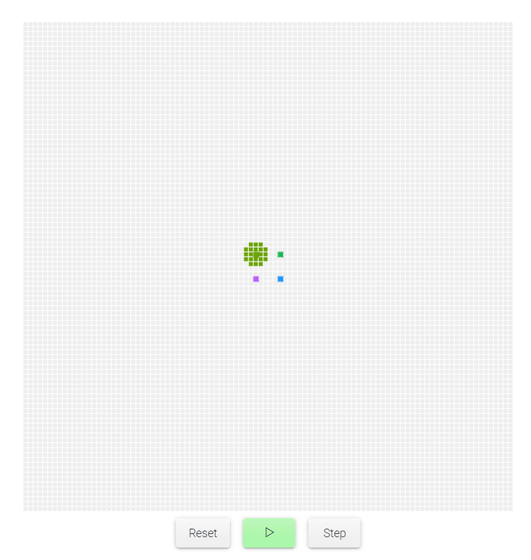 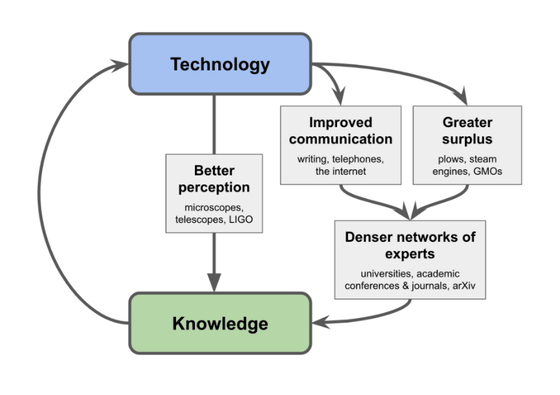 On the other hand, Simler also mentions the existence that adversely affects the network of experts. It seems to be an “ambitiously motivated expert”, and an expert who presents poorly scientifically backed research that seeks results can become a “death node” that impedes the expansion of the right knowledge. Not only that, but because they sometimes extend false knowledge, Simler said that he was a thorn in the network of experts. 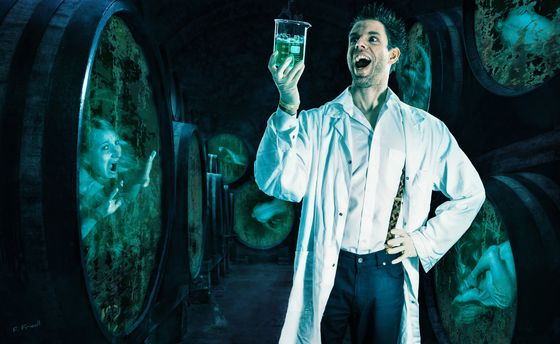