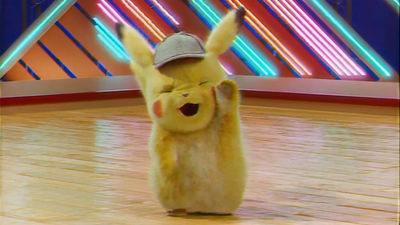 Detective Detective Pikachu ', which has been released since May 3, 2019, has appeared on YouTube. It's a bit of a momentary insistence that 'the main part of the movie being released is YouTube!', But it was a movie in which the Pikachu dance was likely to be addicting.

Ryan Reynolds, who is in charge of the voice of Pikachu, and Mogomogo, and the YouTube video titled 'POKÉMON Detective Pikachu-FULL MOVIE-'.

The movie of the problem is this.


First, the Warner Bros. logo appears. The upper left contains the watermark of 'R. Reynolds' and the name of Ryan Reynolds.

Next is Legendary Pictures.

And Pokemon Co., Ltd., different from the trailer, how to get in the main part of Nori.

Then I try to get into the building, but I can hear music from behind and turn it around.

It is the dance picture of Pikachu that has flowed.

What a pikachu dance continues to flow for over an hour and 40 minutes from here ....

It may be perfect for background music when you work intensively, or for when you want to stream something because it is lonely in silence.