Announcing new casts on the enemy side, such as Toshihiko Seki, who played the role of Oni Mai Tsuji in the anime 'Kimetsu no Yaiba' 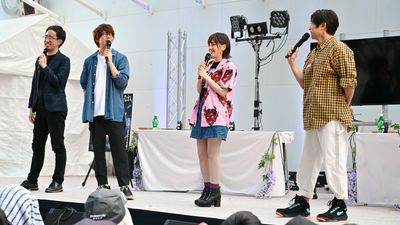 The cast of a new enemy that the main character, Sumijiro, will fight in the TV anime '

Kimetsu no Yaiba ' that is being broadcast from April 2019 was announced at the stage event held at Machi Asobi vol.22 . It was. Looking back up to the fifth episode, three cast members also moved to the audience side to see the monitor. There are also scenes where laughter occurs in that relaxed appearance. New information on demons was announced at this stage. The first demon to appear is Hikaru Midorikawa, and the second demon to appear is Takehito Koyasu . The reason why all the veterans are there is to show the strength of the existence that stands against Sumijiro, so the role of the swamp demon is also from here. Ryohei Kimura , Mikako Komatsu as the role of Shusamaru, Jun Fukuyama as the role of Yabaha, and Toshihiko Seki as the role of Miserable Oni Mai Tsuji will be lined up.


There was a voice of admiration and conviction from the audience that the name was raised by one person in the cast announcement. [Cast comment arrived! ︎】
Comments have also arrived from the cast members who play the demons that appear in episode 6!

Please check it out along with the PV!