How does the coelacanth brain develop? 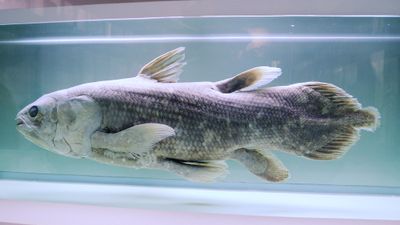 Colacans , also known as “living fossils,” is a precious fish that continues to have the same old form as fossil species. Coelacanth is considered to be closely related to human beings and other living things on land, and it is believed that research on coelacanth allows us to learn more about the roots of humanity. Such coelacanth is a relatively large fish that reaches nearly 2 m in length, but is known to have a very small brain compared to the body, and research results on how the coelacanth brain develops Was announced.

Neurocranial development of the coelacanth and the evolution of the sarcopterygian head | Nature
https://www.nature.com/articles/s41586-019-1117-3

We scanned one of our closest cousins, the coelacanth, to learn how its brain grows
https://theconversation.com/we-scanned-one-of-closest-cousins-the-coelacanth-to-learn-how-its-brain-grows-115147

Coelacanth, whose existence was known by many fossils, was thought to be extinct along with the end of the Cretaceous , but in 1938 the survival was confirmed in South Africa, which surprised the world. Also surprising the scientists is that coelacanth remains in almost the same form as the species found in fossils.

At the time, coelacanth was considered to be a direct descendant of fish that advanced to land and eventually evolved into humans and other limbs. Therefore, it was hoped that it could be possible to unravel the mystery of how humans and other animals evolved by studying coelacanth in detail.

At the time of writing, expectations for colacance have diminished somewhat. Colacans is not considered to be the closest relative to humans and limbs due to progress in research on the origin of evolution, the discovery of new fossils, and results of DNA analysis techniques and molecular biology. Nowadays, the fish is closer to humans and limbs than coelacanth. 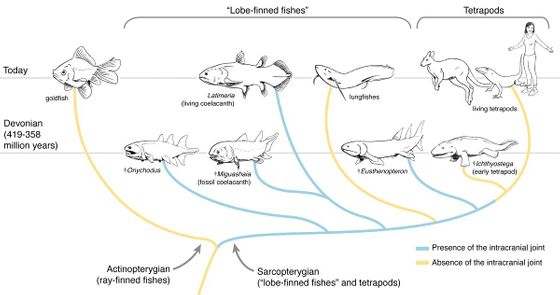 Still, coelacanth has features that are likely to be the key to revealing the origin of evolution. The coelacanth's skull is divided in half by a joint called the 'Cranial Joint', and this joint is found only in very primitive fish like human ancestors who are already extinct That's right.

Also, the coelacanth's brain is very small compared to the skull, and only about 1% of the skull volume. On the other hand, at the rear of the skull, there is an amazingly large

chord , which is in common with the fish that are the ancestors of already extinct humans. So the research team of Hugo Dutel and others at Bristol University decided to investigate how the coelacanth's brain developed.

In order to study brain development, it is necessary to examine adult coelacanth from newborn coelacanth. However, the first place coelacanth is on a rare fish that can not be breeding in a water tank, lays from raised until the female is to some extent grown to hatch the eggs in the womb

ovoviviparity is. Because it is protected worldwide, we can not help catching the coelacanths that have their children in the womb.

Therefore, Dutel et al.'S team decided to use fry samples obtained from a few captive cases that had children. For a long time, researchers have been unable to dissect valuable specimens and investigate the interior, but using the X-ray scanning facility and powerful MRI at the European Synchrotron Radiation Facility in France Has successfully analyzed the internal structure of

As a result of creating an intracranial 3D model at each stage of growth based on the obtained analysis data, it became clear that the relative size of the brain is dramatically reduced during coelacanth development . The brain also seems to be growing slowly, but the growth of parts including the skull seems to be much higher than that. Also, in normal vertebrates, not only does the chordate degenerate in the early developmental stage, but in coelacanth it grows much larger than the brain. The lower image shows the structure of the skull in the growth stage of coelacanth, but from the fetal (Fetus) stage to adult, the notochord (green) gradually grows while the brain (yellow) You can see that is hardly growing.

Dutel and colleagues speculate that multiple factors, such as chordal development and intracranial joints, may have overlapped as to why the coelacanth's brain is so small. In addition, there is also the possibility that the growth of the brain may be sacrificed because the organs that sense electricity, which are near the nose, consume a large amount of energy.

Although much of the coelacanth's ecology is mysterious, Dutel said it has promising clues to understand the evolution and origin of vertebrates.