Takai Maika, Yamashita Nanami, Ehara Yuri talk about the case of a tripartite tribe that aims at a voice actor from the region 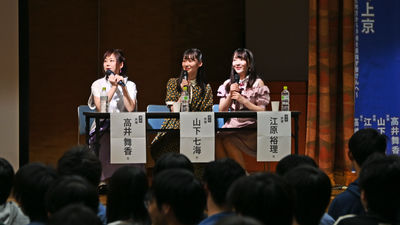 Under the title ' Aim for voice actors from high school students, and for everyone who wants to support them from Tokyo and for those who aim for voice actors from ... ', Mai Takai from Tokushima Prefecture, Nanami Naoki Yamashita , and Yuri Ehara from Yamaguchi Prefecture respectively A “digital creator human resources finding seminar” was held in Machi ★ Asobi vol.22 to talk about how you became a voice actor.

The venue is the 4th floor of the Awagin Hall, a large conference room. The course will be chaired by Aniplex and Ryoma Takahashi. From the center left, Mr. Takai, Mr. Yamashita, Mr. Ehara. Though it is 'a digital creator human resources excavation seminar is impressed, it is not a complicated atmosphere, but we want to go up,' and it starts with a toast although it is a seminar. 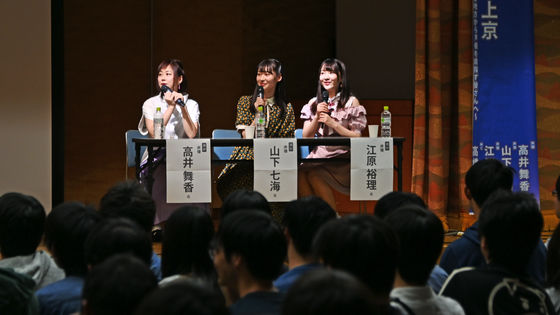 For example, in the case of Takai-san, when I was a child, I played soccer, etc., and my dream was 'Gundam's pilot'. However, at one time, knowing the existence of 'voice actor' by examining the person who sang the song that I heard, 'possibility of developing Gundam' and 'I become a voice actor and can act as a pilot of Gundam 'Sex' to balance, became a voice actor and began to play. After that, when Machi ★ Asobi began, he was on the “visitors” side, but he was chosen as a prisoner in the public audition of “Minori Scramble!” And started walking on the road as a voice actor.

Mr. Yamashita came from a brass band club who once played a flute at the aguin hall where the seminar was held. It has also been said that they have come to classical ballet presentations. The turning point was held in the second grade of high school, Avex and 81 produced 'Anison vocal audition' participation. Yamashita, who had a dream of singing in public but was aiming for another job, challenged with 'take audition once and give up if it is no good', and to pass and debut wonderfully.

On the other hand, Ehara-san, who was interested in theater without being a voice actor, went to Yamaguchi's theater school in Kitakyushu from the sea in Yamaguchi Prefecture. Looking for a part-time job, my friend introduced me to the opening staff of Machi ★ Asobi Cafe, and after this staff, I made a voice actor debut as a part of 'Oenro.'

In addition to the fact that “they were from rural areas and moved to Tokyo with the aim of being a voice actor” in common to the three, there is also the point that they did not attend vocational schools etc. to become a voice actor. Therefore, at first, it was difficult to understand 'basic manners' such as 'How should I stand in front of the microphone?' And 'How should I have a script?' 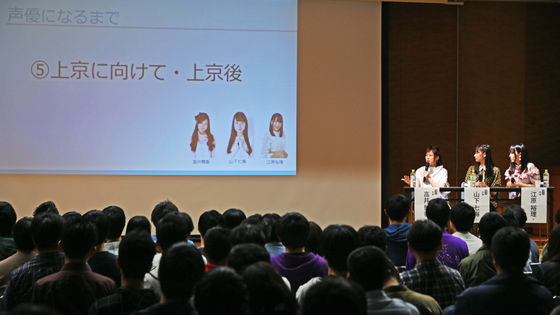 In the second half, “For voice actors at work”, talks about “making roles”, “daily training and customs”, “experiences for working at work”, “fun things / hard things”, “recording place” and “rewarding” The 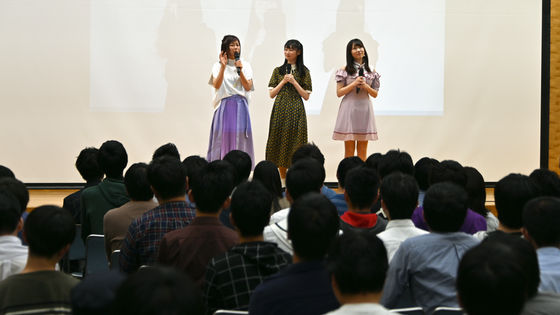 Responding to the question that I felt worthwhile doing a voice actor, Maiko Takai and Yuri Ehara answer when it was said that it was good for you by fans.
Mr. Nanami Yamashita replied that she was supporting her with a smile with a smiling character of her role (* ^^ *) #Mathiasobi 2019

In the seminar itself, the episodes by Maiko Takai and Mr. Yuri Ehara were also interesting in three ways, and how to proceed with the story of MC Takahashi Ryoma who pulled it out was a good idea.

There is no one way to become a voice actor, “this”, and it is not a bad thing unless you are from an urban area and go to a specialized school or training school. Each of the three lives up to the goal of acting as a voice actor in their career, so if you are thinking of becoming a voice actor, please try various things without narrowing your vision.

Three shots after the event have been published on the official SNS of each three people.

Thank you all for coming to 'Digital Creator Seminar' ????

But fun is also a lot of things very, Tsu I will do my best in the future because the still voice of the road is fun ✨ # Machiasobi pic.twitter.com/ct80PrzLtW

It seems that the light and dark of the picture became strange when I pressed the bright button on Twitter ????
I'll give you the photos, laugh!

We are updating from Tokushima, and it is Nashita Yamashita ??????????? 'Digital creator human resources finding seminar From high school students aiming for voice actors with everyone who supports ... From the region to everyone aiming for a voice actor-'It ended safely ????' If there is a hard road and a comfortable road, please choose the hard one, 'she is often told by her mother Certainly, I was able to remember over time the experience I had overcame, and I can speak with my heart over time. Thank you very much for all who gave me, ??? # # # Mathiasobi # Voice actor # Takai Maika # Ehara Yuri-chan # Yamashita Nanami # Did you wink on the road? ???? # The first time the experience says something