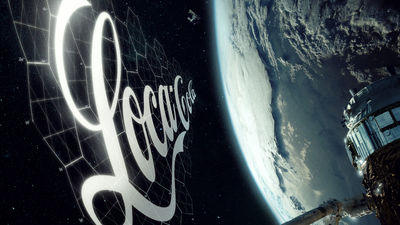 The world is full of advertisements, such as in towns and on the Internet, but

PepsiCo , the world's second largest beverage maker known as Pepsi-Cola, is reported to be planning to advertise on satellite orbits. .

The Russian company “ StartRocket ” uses “ Sorbit Display” (orbital display) in the orbit of the satellite, using a small satellite about a few kilograms manufactured by a university laboratory called CubeSat ( CubeSat ). I am trying to produce

The image of the orbit display is published on the official site of StartRocket, and it looks strange as if a huge LED sign floats in the night sky as follows. StartRocket writes on our official site that we are producing an orbital display, a media with 7 billion people on earth as potential audiences. According to the information on the official site, the orbit display orbits about 400-500 km from the ground and can deliver about 3-4 messages or images per day. By using the sun as a light source, the displayable area as a display is about 50 square kilometers. In addition, CPM is about 9 to 15 dollars (about 1000 to 1700 yen) which is close to TV. The first client for this StartRocket is likely to be the beverage maker PepsiCo, according to foreign media Futurism . According to the report, PepsiCo is conducting promotion activities using StartRocket's orbit display for advertising of the energy-based beverage Adrenaline Rush.

'We believe in StartRocket's potential. Orbital display is a revolution in the telecommunications market, so Adrenaline Rush, PepsiCo-Russia's non-alcoholic energy drink, says Olga Mangowa, a spokesman for PepsiCo-Russia. As a brand innovator, as a supporter of all new things, and as a non-standard, I have agreed to a partnership with StartRocket. '

According to PepsiCo-Russia, StartRocket's orbit display will be used to 'break out stereotypes and unfair biases against gamers'.


'Our world is dominated by brands and events. Super Bowl, Coca-Cola, Brexit, Olympics, Mercedes, FIFA, Supreme, and the Walls of Mexico. Economics are for society,' said Vlad Sitnikov, project leader for StartRocket. is a blood circulation system, entertainment and advertising spoke and its is the center ', the significance to advertise in the universe telling you.

Users of Futurism have shown strong opposition to this, saying, 'Does this startup read all dystopia novels to AI and turn the cursed controversy into a business plan?' It should be legal to shoot down. '

StartRocket is testing to use a helium balloon to push a reflector that will be used as a cube sat into the stratosphere, and 'it was determined that the test was successful one and a half hours after launch,' Sitnikov said You StartRocket plans to put the system to be used for orbit display on satellite orbit in 2021, and at the time of writing, it is in the stage of raising funds for it.