Map that shows popular countries for millionaires at a glance Visual Capitalist publishes an infographic that shows at a glance which countries are the most popular destinations for wealthy people to migrate from the outflows and inflows of wealthier countries around the world. Australia is the most popular destination for the wealthy. About 12,000 wealthy people migrate to Australia in a year. According to the analysis of the South African financial institution AfrAsia Bank Limited which made the data, low population density and good security and good access to economic bases in East Asia such as China, Japan and Korea are listed as Australia's popular secrets It is done. In addition, it is also said that it is the country with the highest minimum wage in the world, and it is also attractive that there are no low-income workers. It is worth noting that the wealthy are fleeing from Turkey at a tremendous pace. The ranking is in the worst 4th place, but more than 4,000 wealthy people migrate abroad each year, which is 10% of the wealthy people in the whole of Turkey. In addition, about 3,000 wealthy people are drained each year from the United Kingdom, which is swaying from leaving the EU , and France, where protesters in yellow vests have been mobbed and an economic and social emergency declaration has been issued. . 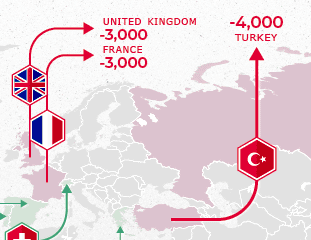 In addition, AfrAsia Bank Limited's report also includes the 'Equal Country Ranking' based on 'the percentage of wealth held by wealthier relative to assets across the country', with Japan ranked first. According to the analysis of AfrAia Bank Limited, Japan has a very large number of 'middle-class' while it has a very small number of 'super-rich'. Specifically, it has 1 billion assets, compared with the 35 million people in the middle class whose assets are under $ 100,000 or less and less than $ 1 million (approximately 111.9 million). There are only 34 people in the ' Billionaire ' that exceeds the dollar (about 112 billion yen), and it is clear that the gap between rich and poor is overwhelmingly small compared to the United States and China. 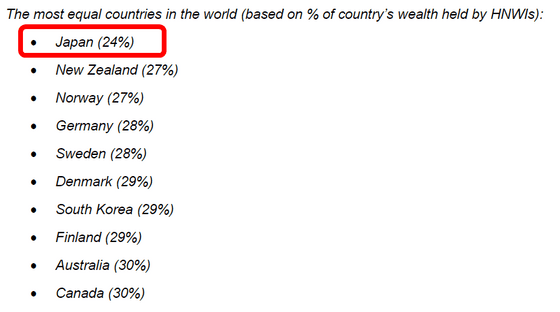