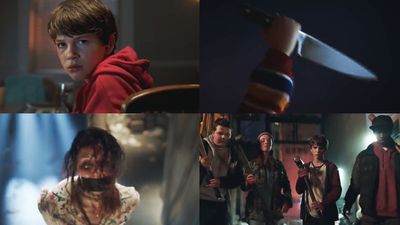 child play a', ' Once the IT / IT' it 'is visible, the end. ' New 'that the production team is a remake of the Child The second part of the ' play ' trailer is available on YouTube.


The protagonist, Andy (played by Gabriel Bateman ) is ...

I can not make friends easily, and I seem to have loneliness in my heart.

Audrey Plaza ), who brings Andy to a woman, also seems to be worried about Andy.

And sighing Andy's eyes are jumping ...

Commercials flowing on the television.

The commercial for “I introduce you the best friends” about the high-tech doll “ Buddi ” that works with your smartphone is ...

It seems to have grabbed Andy's heart.

Andy jumps into a creepy song that echoes in the late-night room.

Staring at this from the corner of the room is a doll.

Also try to operate Buddi doll from the app ...

An error has occurred and can not be controlled.

Karen stares at the Buddi doll named Chacky, following Andy's words, 'I think what Chucky did.'

The appearance of Karen appears in the view of Chucky.

It seems that he is addicted to something.

A kitchen knife that is swung down for men.

Ask Andy, 'Andy, do you know something? You should talk.'

Is there any secret in the chips mounted on Buddi dolls?

A Buddi doll that raises her body behind men.

What a woman driving a car saw ...

It was a quiet Buddi doll.

A woman who panics.

People panic and run away.

Buddi doll that walks with a knife and walks.

It was the children who stood up with the determination that 'we must not stop!'

Buddi dolls attack people one after another ...

The crisis also comes to Karen.

Andy fighting against a Buddi doll with a kitchen knife.