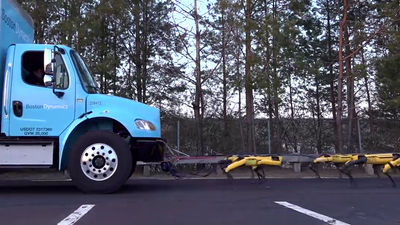 I opened the door with his quadruped robot 'of Boston Dynamics that SpotMini pulling the' track, the video that show off the power has been published.


SpotMini appears from the left side of the screen. It's a creepy scene, coming out in a group with a thought of one animal or another. The track appears behind it. With the gear in neutral, you can climb up one slope only with the power of SpotMini. A track that travels with you as it is. The scene where SpotMini, which is lined up in two rows, rises from the down position and starts to pull the track is taken at another angle.

By stepping on SpotMini you can see how the truck starts to move.