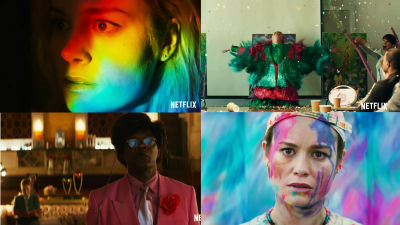 A trailer for the movie 'The

Unicorn Store ', starring and directed by Brie Larson, who plays the Captain of the Avengers, is on YouTube. It is a comedy movie featuring Samuel L. Jackson and Bradley Whitford .


A woman who paints colorful paint.

Lame flickering at your feet.

The kit was drawing colorful paintings that were out of the canvas. But those who saw the picture ...

All grades are 'Poor (bad)'

It is a kit aimed at the world of art, but without eyes at all, it is inevitable to return to the home.

I will send the days of crashing.

In such a day-to-day mindset, kit is to be working in a company ....

Demonstrating the impossibility of work such as making a copy with the copy machine open.

'This is the job you wanted to do or was there another dream?' Kit asked.

Men in the same workplace.

'I wanted to be a figure skater when I was a child, but my parents couldn't afford to pay for lessons ...' said an unexpected answer.

The colorful paint appearance is, in turn, under a kit that works in plain clothes ...

You will receive a letter.

What is written in the letter is the message 'Ready?'

'What preparation is it?' Said the kit.

A store with a neon sign called 'The Store'.

Men who claim to be 'salesmen' (play: Samuel L. Jackson)

'I will sell what you need'

The salesman showed a unicorn picture.

In fact, the dream of childhood as a kit is 'to become an owner of unicorns'. The salesman suggests, 'If you can prove you are an adult, let's sell unicorns.'

It is an excited state kit when you can keep a unicorn.

I need a unicorn house to keep unicorns, so I went to the home improvement center.

I'm keen to make this a stable place ...

'I hate to live in such underground ponies,' said Tsukkomi.

Of course, my parents have a big backlash on the kit saying 'Keep a unicorn', 'Are you going to be kidding?' 'If you keep it a dog please!'

For such parents, 'I was bad with a disappointing daughter!'

My parents are amazed.

Under such circumstances, can the kit be an adult and get a unicorn?

'When I grow up, I sometimes fail because of my great care.'

A haystack behind a salesman who says, 'Show me your skills!'

'Even if you're an adult, you need magic for life.'