Fly in the sky as a bird while feeling the real wind with the skin “Nintendo Labo Toy-Con 04: VR Kit” “Wind Toy-Con” &amp; “Toy-Con” Experience Report 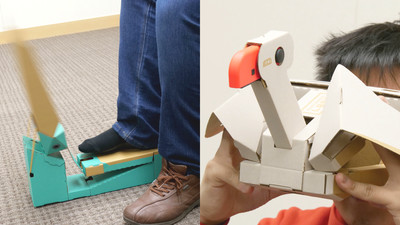 A new form of play, “ Nintendo Labo Toy-Con 04: VR Kit ” will be released on April 12, 2019. A combination of the Nintendo Switch and a cardboard controller makes it easy for anyone to experience VR (Virtual Reality). Among them, “ Wind Toy-Con ” is a novel kit that allows you to experience the “tactile” that feels the flow of wind on the skin, in addition to the visual and hearing that can be experienced with conventional VR. In addition, combining it with ' Toy Toy-Con ' has made it possible to achieve an unprecedented VR experience. I got an opportunity to experience it a little while, so I have become a bird of my mind in virtual space.

'Wind Toy-Con' looks like a pedal with a big fan. 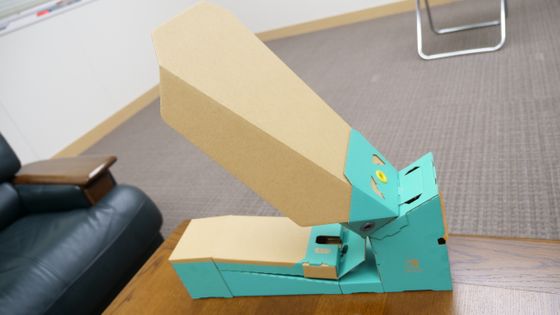 By putting a rubber band on the back ... 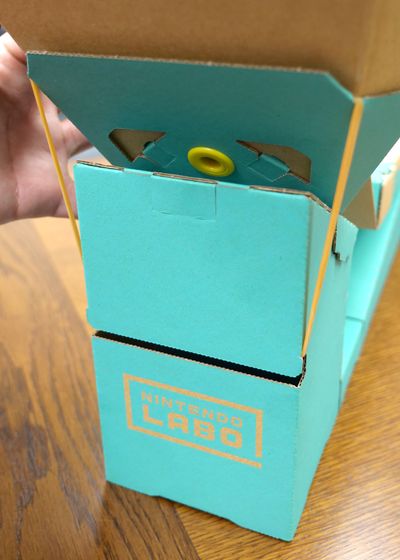 The fan opens and is ready. 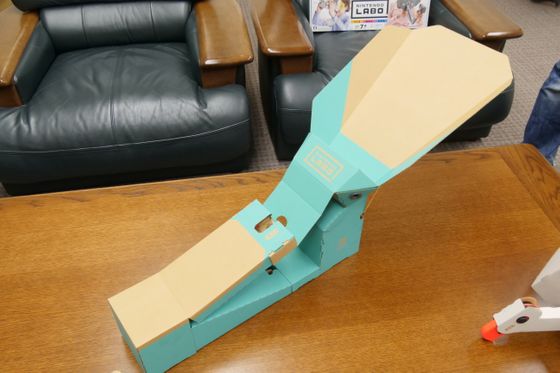 Sit in a chair and step on the pedal with your foot. 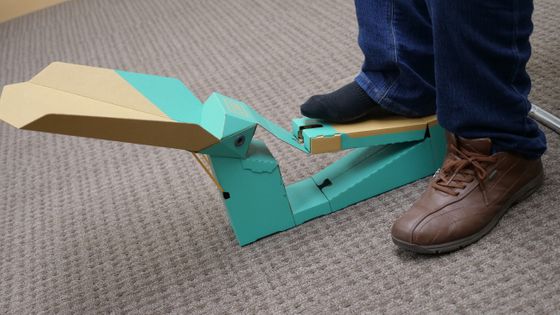 The fan moves and sweeps the wind from the foot to the face. The structure of the wind Toy-Con was very simple, and the voice of the question, 'What is the relation to this VR?' 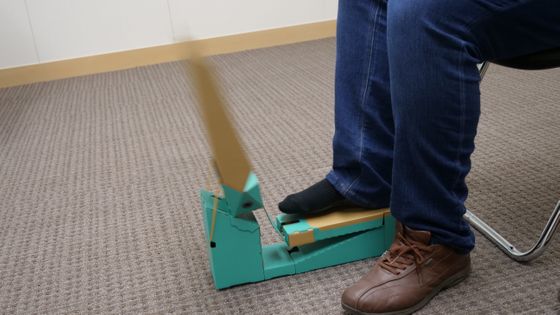 If you hold the VR goggles equipped with the Nintendo Switch body, the preparation is OK. 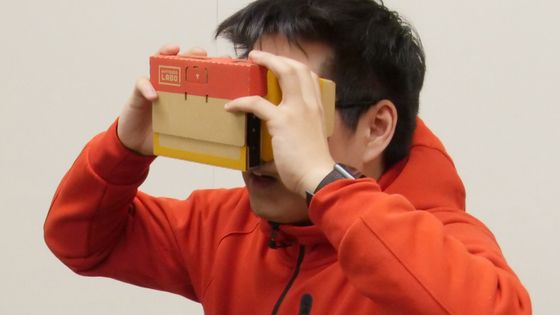 Wind Toy-Con allows you to play mini-games, such as jumping on the flying ball and heading, as a frog. The ball flies from the bear-shaped gate. When the ball flies in time, and depressing the wind Toy-Con pedals quickly ... 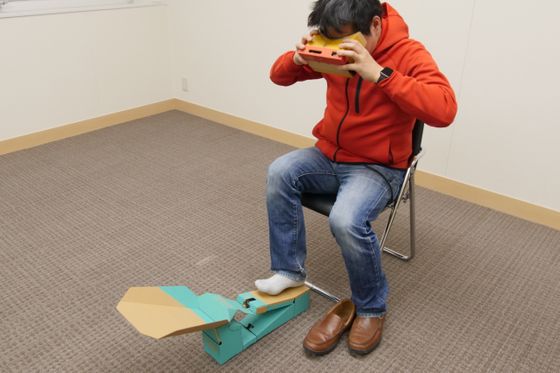 A mechanism to jump onto the ball. 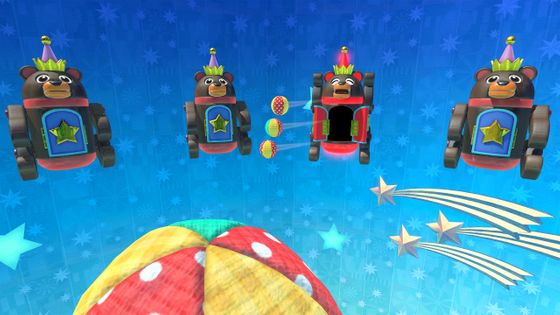 At the same time, the wind blows from my feet, but when I was using VR goggles, it felt like the wind pressure when this wind actually jumped, and I really jumped on the ball even though I was not moving one step from the chair I felt like that. The editorial staff who got hooked on the mini-games stepped on the pedal quite a lot of times, and the other editorial staff who was looking from the edge said, 'Can't the cardboard wind Toy-Con be broken?' There was also a scene I think, but I did not seem to break at all, and I found it to be a fairly sturdy construction. You can see what a real screen looks like from the following movie.


Wind Toy-Con can play alone, but it is possible to play more by combining 'Toy-Con'. 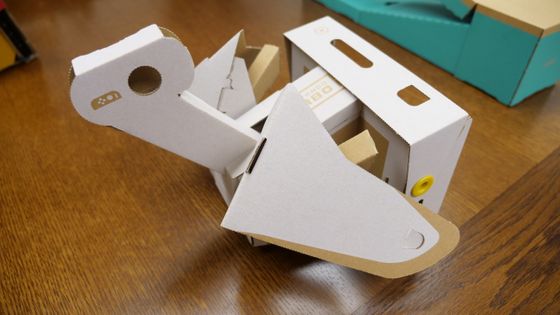 Insert Joy-Con (R) into the head of Tori-Toy-Con. 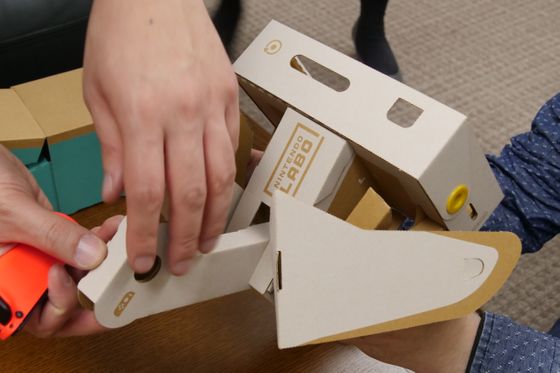 The main body of the Joy-Con (R) is beak, and the stick is designed to be visible, and the profile is indeed the bird itself. 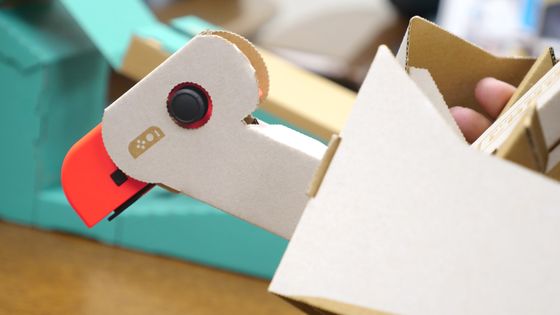 Under the left and right wings, there was one clip-like structure. 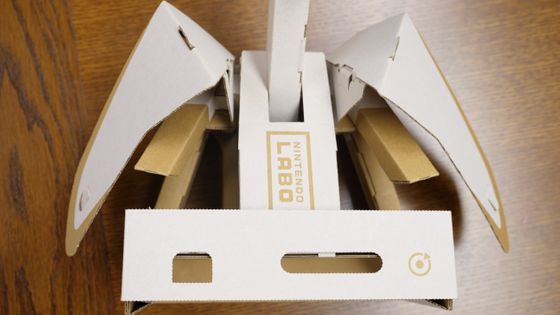 Tori Toy-Con holds the clip part with both hands like holding a hamburger. 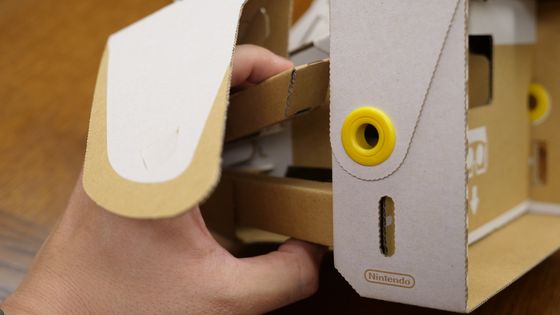 When you squeeze the clip, the wings move with the bassabassa and the head moves back and forth. The movement is like a bird flying really. 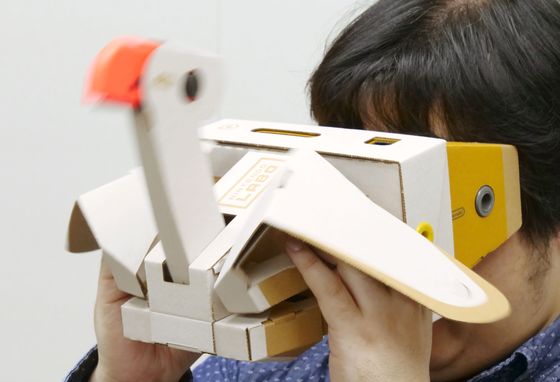 You can see in the following movie how Toy-To-Con actually moves.


Take the wind Toy-Con while holding the Toy-Con is ready. In the Toy-Con, you can fly into the sky as a bird. However, the bird in the screen is not a real bird, but a mechanical design. 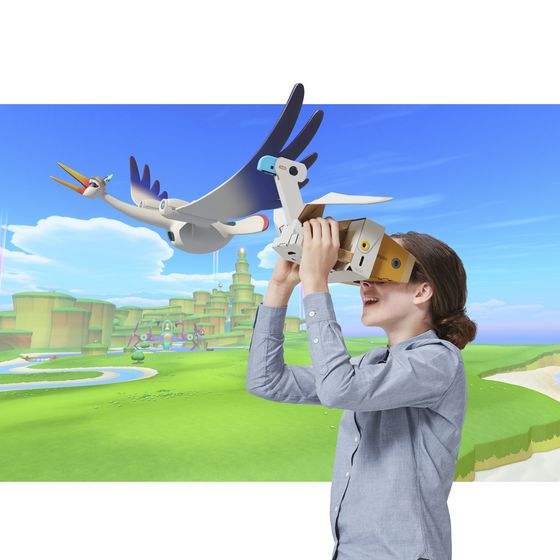 The screen below is a camera view from the back, but on the actual screen it is a first person view with the camera at the eye of the bird. 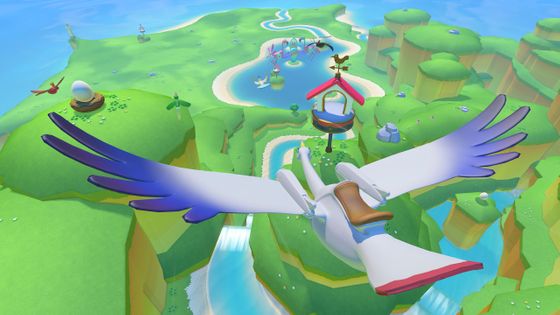 The direction of the birds can be changed by pointing the bird Toy-Con. If you use both hands to flap the wings of Bassavas and the bird Joy-Con, the bird will fly faster. As you can see birds flying like you well when you look around you, there was also a scene in which the editorial staff who is experiencing 'Ah! Discover my friends!' 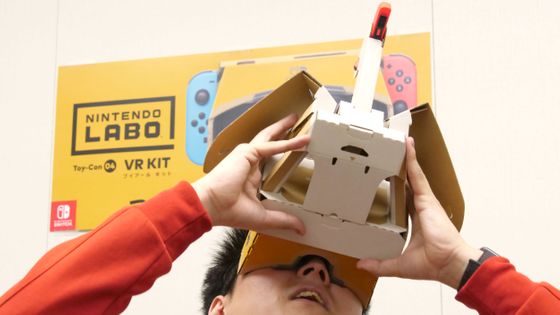 Furthermore, when I step on the wind Toy-Con's pedal ... 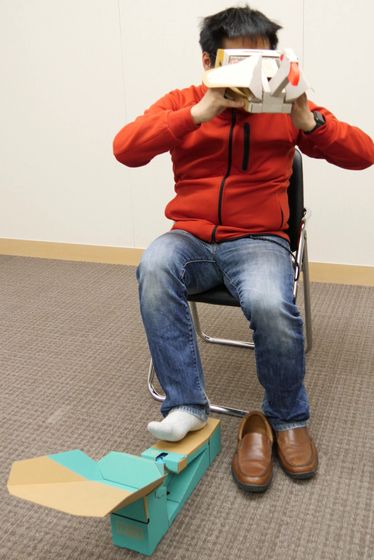 What a pair of propellers sticking out of the wings of a bird wing and turning violently. Birds that have gained the propulsive power ride the wind while accelerating more than flapping. As the wind blows from your feet at the same time you accelerate, you can really feel like the birds are accelerating rapidly as you cut into the sky. Suddenly the propeller was sticking out of the bird, and the feeling of accelerating rapidly while feeling the wind pressure on the face was so surreal that there were occasions when the editorial staff who experienced it spews out involuntarily. 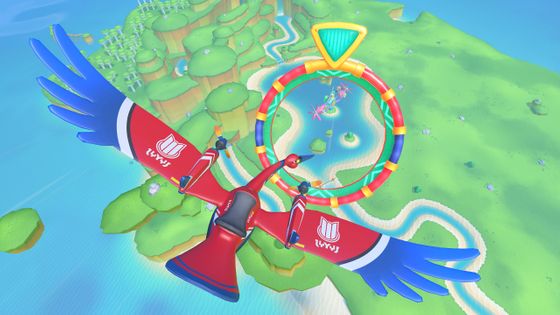 The actual game screen can be seen in the following movie.


In addition, you can attach the attached 'Jacara-gura' to Tori-To-Con and blow air to create a wind in the game, a more interactive way of playing. You can see from the following movie how you actually play.


Both Toi Toy-Con and Wind Toy-Con have a relatively simple structure, and the mini-games you can experience are simple, but the experience of 'feeling the wind with your own skin' enhances immersiveness in VR above all else Will Human beings have dreamed from ancient times, 'If they were birds ...' Tori-Toy and Toy-Con are kits that embody the 'virtual reality' that can realize such humanity's dreams in a virtual space did. In addition, because it is made of cardboard, it can be expected as one of the fun ways that children can design their own birds using paints and masking tape.

The screen of the VR can not be confirmed from anyone other than the person who is experiencing it, but the movement of the bird is very comical even when viewed from the end, and the head of Tori Joy-Con screams, 'Wow! You can enjoy it just by looking at the end of the figure that moves the queus. I felt like I saw one answer from Nintendo that combines 'play' and 'VR' in a kit that can be enjoyed by people who have never touched VR content. 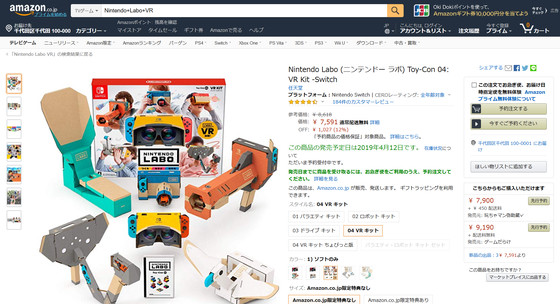