The new era is decided to 'Reiwa' 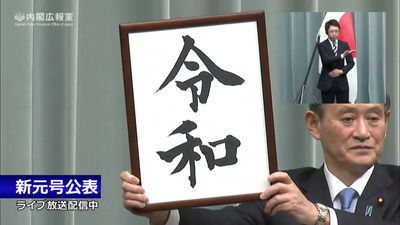 The first issue 'Heisei', which began in January 1989, will be converted along with the abduction of the Emperor, and the new era announcement will be 11:30 April 1, 2019 prior to the succession of the throne. It was done from Relays were also held at NHK and other TV stations. The announcement itself is somewhat delayed because the new era is decided by the extraordinary cabinet meeting and the document of the ordinance is taken to the Imperial Palace. Q:
What did you emphasize in the selection?

A:
After this, the Prime Minister will directly convey the meaning and message to the people.

A:
The person wants to keep secret. In addition, I will not announce it because it will show a connection with a specific individual when it is revealed.

・ Postscript
An illustration related to 'Rekazu' has appeared in 'Cute Free Material Collection Irasutoya', such as the announcement of 'Rekazu' by Chief Cabinet Secretary Yoshihiro Akira and the explanation of the first issue by Prime Minister Abe.

Illustration of the person who announces the original issue (relax) | Illustration of the person who holds the original era (Registration) | Illustration of the person who explains the era issue (Relax) |
https://www.irasutoya.com/2019/04/blog-post_615.html Illustrations of the calendar that changes from Heisei to reluctance |