Are survival techniques appearing in movies and dramas realistic or scored by adventurers? 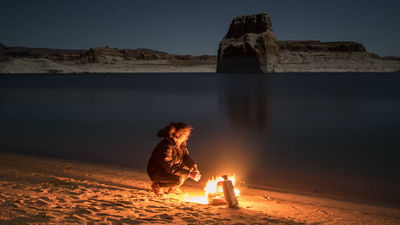 It is not uncommon for the element of “survival” to appear in fiction works, but the way of drawing it is “it is likely to be realistic”, so it is realistic only by being drawn according to the scenario. Various things to not accompany. Bear Grills , who is known as an adventurer, rates eight works as realistic as the survival depicted in fiction in the eyes of the adventurer.


The first appearance of ' Revenant: The Reviver ' is a scene of spending one night in the fallen horse's body. Mr. Grills states that the most important thing in this environment is 'protecting yourself', and if it is inside a horse it will not be attacked by wildlife, and it will protect itself from hypothermia and strong winds, so survival It was evaluated that it was a realistic option for Mr. Grils, who told the story of a person who spent the sandstorm in the Sahara desert and died in the body of a camel, seems to have tried it in the same way.


Then ' cast away '. Chuck Norland, who plays Tom Hanks, is forced to live on a deserted island that has survived the crash of his flying plane. Anyway, in order to live, Mr. Grills sympathizes with the appearance of the chuck that tries to rub the trees together and set the fire. For example, when Mr. Grills himself makes a show on the show, even if it's only 30 seconds on the air, it actually takes about 12 hours. Still, in the survival situation, the fire was a big and very realistic assessment.


From ' Heart Blue '. A scene of free fall appears without opening a parachute over 2.2 miles (about 3.5 km). Grills, who says that he himself broke his spine in an accident at the time of parachute descent, said that although it was interesting as a picture, survival was unrealistic.


' Everest 3D ' is a movie based on the Everest massive accident that occurred in 1996, and the theme is survival throughout the whole film. It is very difficult to move Rob Hall's body off the mountain, and as of 2019 he remains under the Everest South Summit. Mr. Grills also climbed Everest a few years ago and saw Hall's body. Because this film is based on reality, the survival depicted is very realistic.


In the ' Titanic ', passengers are thrown into the cold sea after the passenger ship sinks. Mr. Grills points out that it is dangerous to move in mid-winter water if it can not move properly. Although this survival was assessed as realistic, in fact it was said that the two people in the cold water could not talk satisfactorily and that Rose probably would have been difficult to survive.


In ' Crocodile Dundee, ' Sue, who was unwillingly watering the water bottle, was attacked by the crocodile that was hiding. Actually, according to Grills, who met the crocodile in the jungle, the skin of the crocodile was so hard that the knife did not pass easily, and it was about to pierce the handle with stone and somehow stabbed it. Even so, the position where Crocodile Dundee Mick pushed the knife was correct, and it is 'real' in the survival assessment.


' Bird box ' is Netflix original drama. Ms. Mallory, an artist who plays Sandra Brock, is going to take the child and go down the rapids by boat, but Mr. Grills pointed out strictly that 'If you want to tackle the rapids, you need proper equipment and experience.' If it was going to go down the rapids by boat as per the picture, it was the end of one volume and was evaluated as 'unreal'.


' The office ' is a television drama broadcasted in the United Kingdom, remade with Steve Karel starring. Among them, there is a story of survival in which you take off your pants and hook them on a branch to make them a 'shelter.' 'The protagonist Michael is very creative and aggressive,' Grils gave up, but his knowledge of survival has been fatally lacking, so it was rated as 'unreal' for survival.